Xiaomi Redmi Note 4's camera impresses in well-lit conditions, but struggles when the light is not adequate

We have seen a number of phone makers switch to lower megapixel cameras recently and focus more on the camera software and handy camera modes to deliver good picture quality. Xiaomi’s new budget smartphone Redmi Note 4 is the latest addition to the list. Xiaomi has used a 13-megapixel sensor which offers better picture quality than its predecessor the Redmi Note 3’s 16-megapixel camera.

One of the highlights of the camera is the phase detection auto focus feature which helps lock focus on moving objects really fast.

The aperture size of f/2.0 and the built in blue glass filters are some of the features that can minimises colour distortion caused due to infrared rays. The camera interface looks clean and easy to follow. The first screen shows options such as live filters, camera modes and the option to record videos are lined up around the touch shutter button.

The live filters provide the option to see what an image will look like before even taking the shot. The camera modes are put together on a single page. Some of the modes we liked include Straighten (saves a shot vertically regardless of the orientation of the phone when the picture is taken), Tilt Shift (blurs the background and increases focus on the subject and Beautify (removes marks and other facial imperfections of the skin of a person in a photo).

One can click a shot in high, medium or low picture quality with the aspect ratio of 4:3 or 16:9. The image looks sharp through the frame suggesting the camera is good at reproducing details, as long as the surroundings are properly lit.

One can see minute details such as the text on the shop banners and the shadow of the trees.Colours look realistic. For example the green of the trees and the blue of the sky don’t feel oversaturated as some phone cameras do. Like most budget smartphones, night photography is not the strong attribute of the Redmi Note 4. The level of detailing is poor. One can see the noise in the image clearly. Due to the high level of distortion, even the colours look a bit washed out. 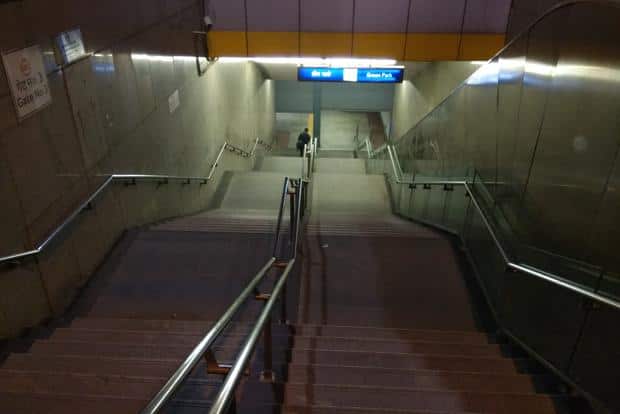 In the absence of adequate light, the camera has been unable to get the finer details properly. Not only the image looks blurry, colours look washed out but even the detailing is poor. This shot shows that the camera can capture colours realistically even in lighter objects. The pink in the flower and the finer details have not been lost as they tend to do in majority of budget smartphone. Most of the colours look accurate including the green in the leaves directly underneath the camera. The green in the leaves behind the flower looks a bit over exposed, though. Even though the camera turned in mediocre shots in low-light, in properly lit indoor conditions, the camera can still muster solid amount of detailing. In this shot taken under yellow light, the food item in this case and the trimmings on it look in focus, colour accurate and crisp.