Samsung's 2017 refresh of the A5 has a lot going for it, including the design, performance and greater focus on data encryption

Samsung has upped the ante when it comes to the look and feel of its phones that sit below the flagship Galaxy S series in terms of price. We also had a Galaxy A5 last year, and Samsung has decided to call it the A5 (2017) this time around. What makes it immediately better than its predecessors is its distinctly superior design. Priced at Rs28,990, the A5 is going to face stiff competition from the likes of OnePlus 3T (Rs29,999). 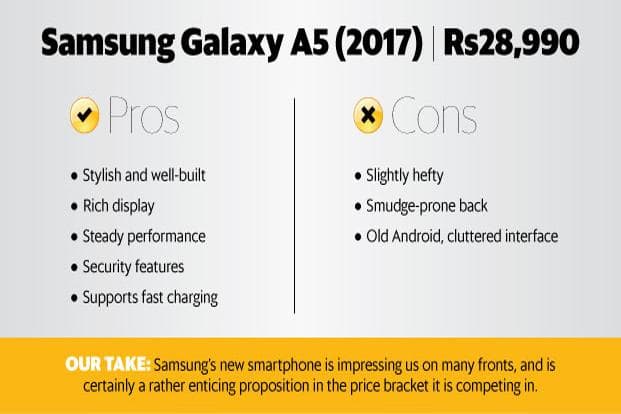 The Galaxy A5 (2017) has a pebble-shaped design with rounded corners and glass panel on the back. While it looks good, the glossy back smudges a lot. The A5 has a very compact form factor and its flat metallic frame enhances grip too. The phone feels a bit hefty in the palm. The A5 is one of the few rugged phones that can actually survive under water up to a depth of 1.5 metres for 30 minutes. At 157g, it is heavier than the Xiaomi Mi5, which weighs just 139g. The A5’s rectangular-shaped home button with rounded corners also serves as the fingerprint sensor.

The phone has two separate set of trays, one for a nano SIM slot and a microSD card slot on the top spine, and another tray on the left spine for a second nano SIM.

It also has a type-C port and supports Samsung’s proprietary fast charging which can charge a completely drained out battery to up to 50% in just 45 minutes.

The Samsung smartphone has a 5.2-inch AMOLED display with screen resolution of 1,920x1,080p. It looks bigger than a more mainstream 5-inch screen. Also, the navigation keys are placed outside of the phone’s interface alongside the home button. This means you actually get to use the entire display.

It is a bright looking display and impresses with its colours and sharpness. It feels a bit reflective, but not to the point that would affect legibility.

Samsung has added a few display options such as Blue light filter which changes the colour of the screen to reduce stress on eyes and the Screen Mode which can make colours look brighter to liven up the content playing on the screen.

Another highlight of the screen is the Always-on feature, which keeps a small part of the display always lit up to show the date and time. The display is protected against scratches by Gorilla Glass 4.

The Galaxy A5 (2017) runs on an older Marshmallow (6.0) version of Android with Samsung Touchwiz UI on it. This is quite perplexing, considering we’ve had Android 7 (Nougat) available to phone makers for many months now, and even many recently launched and more affordable Android phones run the newer software. Though the interface looks polished, animations look smooth and there are plenty of funky looking themes and wallpapers, but it feels a bit cluttered at times. The positive is that this is also one of the few phones that support Samsung’s new mobile payment service launched in India called Samsung Pay.

Security is one of the key highlights of the Galaxy A5 (2017). It is powered by Samsung’s multi-layered security solution called Knox that offers chip-level encryption. It allows the device to encrypt private data into a secure compartment away from other content. It also prevents unauthorised users from removing SIM cards or making changes to the phone’s software. The visible set of security tools include an app called S Secure app which allows users to lock apps with a fingerprint and hide private photos and documents in a hidden folder.

Performance: Can handle most tasks well

Powered by a Samsung’s proprietary 1.9GHz Exynos 7880 Octa-core processor with 3GB RAM, the smartphone was able to handle most of the tasks smoothly. Switching between apps was smooth and even with 8 to 10 apps running in the background, there was no sign of a lag or heating up on the back. The phone was able to run high-resolution videos and games such as KFC Big Bash and Asphalt Xtreme comfortably. It offers 32GB of internal storage and can take microSD cards of up to 256GB. The phone’s 3,000mAh battery lasts a day at most on one charge.

The A5 (2017) comes with a 16-megapixel single camera. The module doesn’t jut out like that in its rivals. The camera works best in daytime. In a properly lit environment, it can capture a lot of detail. Colours look richer without feeling oversaturated at any point. Low-light shots are not the camera’s strong point. In low light, colours look a bit washed out. The 16-megapixel front camera also works best in properly lit surroundings. Indoor shots look a bit blurry.

Samsung Galaxy A5 (2017) impresses with its stylish looks, steady performance, good looking screen, and hardware level security that is rare in the Android ecosystem. If you are looking for a phone with a bigger screen, you might want to consider the OnePlus 3T, as it offers a bigger 5.5-inch Full HD display, is driven by an even more powerful Qualcomm Snapdragon 821 chip with 6GB RAM and runs the latest 7.1 version of Android Nougat.