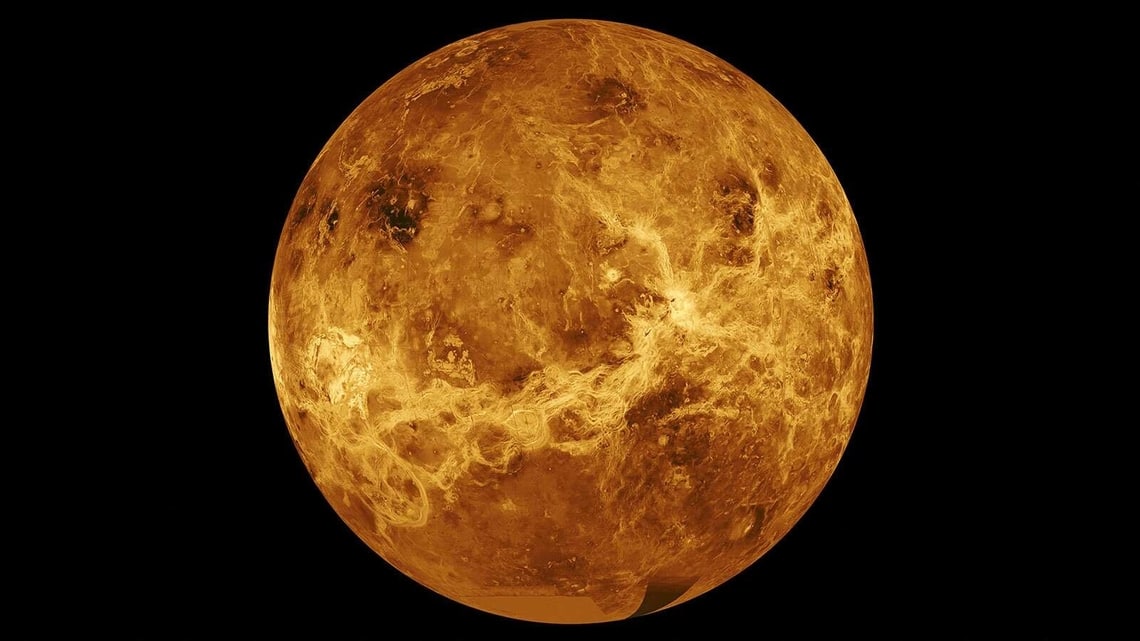 This file photo released by NASA shows the planet Venus in a composite of data from NASA's Magellan spacecraft and Pioneer Venus Orbiter - NASA announced two new missions to Venus on June 2, 2021, that will launch at the end of the decade and are aimed at learning how Earth's nearest planetary neighbor became a hellscape while our own thrived. (AFP)

Los Angeles - US space agency Nasa announced plans on Wednesday night to launch a pair of missions to Venus between 2028 and 2030 - its first in decades - to study the atmosphere and geologic features of Earth's so-called sister planet and better understand why the two emerged so differently.

The space agency said it was awarding about $500 million each to develop the two missions, dubbed DAVINCI (short for Deep Atmosphere Venus Investigation of Noble Gases, Chemistry and Imaging) and VERITAS (an acronym for Venus Emissivity, Radio Science, InSAR, Topography and Spectroscopy).

Also read: Why future missions to Venus will not be as easy as they look

DAVINCI will measure the composition of the dense, hothouse atmosphere of Venus to further understand how it evolved, while VERITAS will map the planet's surface from orbit to help determine its geologic history, NASA said.

DAVINCI , consisting of a fly-by spacecraft and an atmospheric descent probe, is also expected to return the first high-resolution images of unique geological characteristics on Venus called "tesserae." Scientists believe those features may be comparable to Earth's continents and suggest that Venus has plate tectonics, according to NASA's announcement.

Earth's closest planetary cousin and the second planet from the sun, Venus is similar in structure but slightly smaller than Earth and much hotter. Above its forbidding landscape lies a thick, toxic atmosphere consisting primarily of carbon dioxide, with clouds of sulfuric acid droplets.

The consequence is a runaway greenhouse effect that scorches the surface of Venus at temperatures as high as 880 degrees F (471 C), hot enough to melt lead. The "air" on Venus is so dense and pressurized that it behaves more like a fluid than a gas near the surface.

In this photo provided by Nasa, Administrator Bill Nelson speaks during his first major address to employees, at the agency's headquarters in the Mary W. Jackson Building in Washington on Wednesday, June 2, 2021. He spoke about the plans for future Earth-focused missions to address climate change and a robotic and human return to the Moon through the Artemis program, as well as announcing two new planetary science missions to Venus – VERITAS and DAVINCI+. (AP/NASA/Bill Ingalls)

Scientists believe Venus may once have harbored seas of water potentially suitable for life, before unknown forces triggered its extreme greenhouse effect, vaporizing its oceans.

"Venus is a 'Rosetta stone' for reading the record books of climate change, the evolution of habitability and what happens when a planet loses a long period of surface oceans," James Garvin, chief scientist for NASA's Goddard Space Flight Center in Maryland, said in a statement.

NASA's last dedicated mission to Venus, the Magellan spacecraft, reached the planet in 1990. After four years in orbit making the first global map of the Venusian surface and charting its gravity field, Magellan was sent plunging to the surface to gather atmospheric data before ceasing operations. The DAVINCI probe will ultimately meet a similar fate.

FILE PHOTO: Handout image courtesy of NASA shows the planet Venus at the start of its transit of the sun, June 5, 2012. Venus passed directly between the sun and Earth, a transit that won't occur again until 2117. (Reuters)

After two fly-by passes to capture time-lapse imagery of Venus' clouds, DAVINCI will release its spherical probe for an hour-long descent to a vast mountainous region.

Slowed first by a parachute, then by aerial friction, the probe will sample atmospheric chemistry, pressure and temperature all the way down, and take high-resolution images as it nears the surface.

Even if it survives landing, the probe is expected to overheat within 20 minutes, Garvin said.

Also read: How long is solar system's longest day? Venus has the answer