How to fight tech addiction right

'Your Happiness Was Hacked' offers a guide to healthy, happy and stress-free living with tech

Vivek Wadhwa and Alex Salkever, two well-known experts in the field of technology, have a simple, albeit brutal, warning for their readers, best summarized by the catchy title of their new book: Your Happiness Was Hacked: Why Tech Is Winning The Battle To Control Your Brain—And How To Fight Back (Penguin Random House, ₹ 599). If the subtitle sounds glib, it’s not misleading, for the book sets out to do precisely what it promises. In 250-odd pages, it establishes the ways in which technology has invaded the deepest recesses of our lives, fanning our appetite for endless consumerism, shaping our romantic fantasies, the way we work, travel, take holidays and time off . That’s not news to most of us, especially to Americans, for whom this book is primarily meant. But the spattering of examples and statistics hits the reality home with a renewed force.

Sample this: In 2015, according to data cited by the authors, nearly 3,500 people in the US died and 391,000 were injured in vehicular accidents involving drivers distracted by their electronic devices. Salkever’s decision to write this book, he says, was influenced by a similar incident, when, absorbed in his phone, he was about to ram into a group of cyclists on a busy road. Wadhwa’s inspiration was more visceral. On holiday, with no internet to let him track the goings-on in his company back home, he had a heart attack, triggered by what he and his co-writer call excessive “technostress".

In pithy chapters, written in a tone of friendly advice bolstered with personal anecdotes, the authors take us through obvious and invisible traps laid by technology. Once again, those who follow news from the industry, or are interested in its intersection with culture, won’t be surprised. It’s not unknown, for instance, that addiction to screens can mess with the contours of the human brain. Or the fact that overuse of mobile phones can cause insomnia and other psychological disorders. Staring into the blue light emitted by screens affects melatonin production in the body and the long-term effect of the “attention economy", where everyone, from retail brands to employers, bombards us with information all day, can be calamitous. 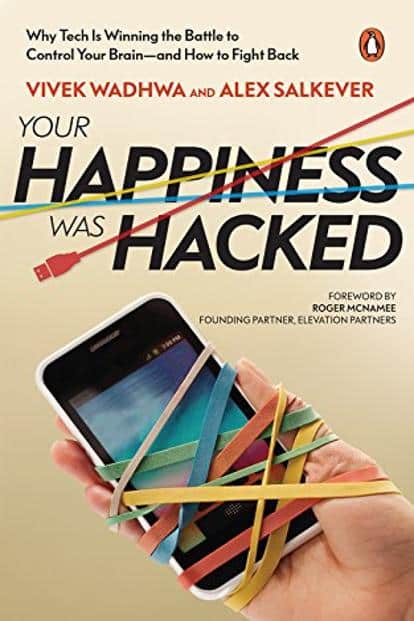 Apart from individual mental hygiene, there are consequences for nations in the way communities consume social media. The victory of Donald Trump in the US, Brexit in the UK and the backlash against Rohingya Muslims in Myanmar are recent examples of technology becoming a poisoned chalice. The introduction of “Aardhar" (in the words of the authors, uncorrected by their publisher) in India has led to large-scale havoc. Particularly fascinating is the chapter on emerging workplace policies on the use of tech , especially in the West, including employers deactivating emails for employees on vacation, cutting down on hours of meetings, and ensuring people go on vacations regularly.

The most useful section comes at the end, where the authors take us through their vision for a humane tech—one that would screen us from the relentless onslaught of advertisements, warn us when we have spent far too long playing video games, help us focus without getting flooded by messages and Reply-All emails, and enable us to manage our lives and commitments in a disciplined way without losing our sanity. For all that it offers, Your Happiness Was Hacked could have been a long essay, though the message it conveys is valuable, one that needs repeated iterations.