How past vaccine races can help win this one

Like the coronavirus, polio came with fear, misinformation, and a long tail of damage. History has lessons for today’s crusade 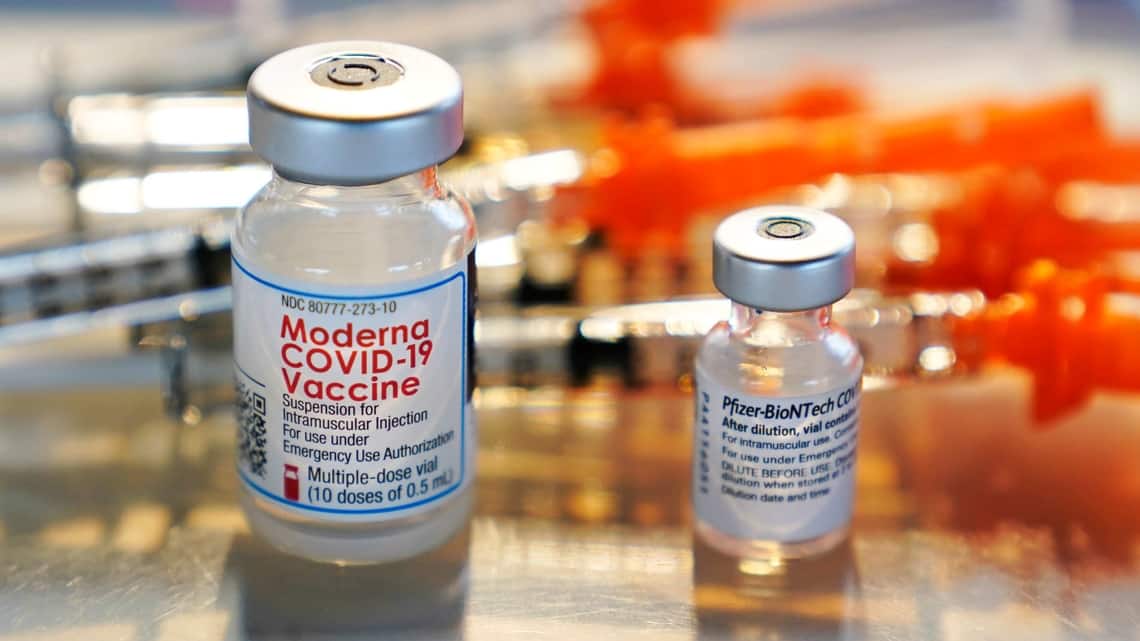 FILE - In this Feb. 25, 2021, file photo, vials for the Moderna and Pfizer COVID-19 vaccines are displayed on a tray at a clinic set up by the New Hampshire National Guard in the parking lot of Exeter, N.H., High School. The nation is poised to get a third vaccine against COVID-19, but health officials are concerned that at first glance the Johnson & Johnson shot may not be seen as equal to other options from Pfizer and Moderna. (AP Photo/Charles Krupa, File) (AP)

“The vaccine works. It is safe, effective, and potent.”

In 1955, those were the words that told the world U.S. scientist Jonas Salk’s polio shot was a success. It was news greeted with popular jubilation, ringing church bells and boldface banner headlines. The sort of heartfelt relief that most of us can readily identify with, more than a year into a coronavirus pandemic that has now killed 2.5 million people.

In an age when rich countries have largely forgotten the ravages of infectious disease, we have spent the past months grappling with the impact of a highly contagious illness that does not discriminate. We now hope our technological and medical advances can accomplish in months what it took decades to achieve in the past with poliovirus, smallpox or measles. As those rejoicing at Salk’s victory soon found, the first vaccines are the end of the beginning — not quite the beginning of the end.

The two viruses are very different. Poliomyelitis is primarily spread through contact and infected fecal matter, while Covid-19 is usually transmitted through respiratory droplets. The first tends to affect young children, and can invade the nervous system. The second appears to hit the elderly hardest. Polio has triggered no pandemics, no economic crashes. Yet the large-scale campaign against what was once called infantile paralysis, and the fear that preceded it, is arguably the closest precedent to today’s effort.

There’s good news in that. Past inoculation successes are reminders of what is possible: We know that vaccination works. There were also painful mistakes that stand as salutary reminders for modern policy makers that ending viral nightmares requires sound judgment, investment and trust.

Records of polio cases date back centuries, perhaps as far back as ancient Egypt, but epidemics only became a serious scourge in Europe and the United States as the last century dawned. The first recognized U.S. outbreak was in Vermont in 1894. Others followed. In 1916, a devastating summer in New York brought death, lockdowns, anti-immigrant prejudice and culls of cats. It left a trail of dread. The annual number of U.S. cases peaked in 1952 at nearly 60,000.

Many more children died in accidents or from cancer over these years, but panic was widespread. Images of patients in iron lungs, huge metal chambers designed to help patients breathe, terrified. So did young children in leg braces. By the 1950s, the only thing Americans feared more than polio was the nuclear bomb.

Ending that took a crusade. President Franklin Roosevelt, who contracted polio in 1921, helped turn a rehabilitation charity into an unprecedented national campaign that touched nearly every American, encouraging them to give just one coin for research. They did, sending them in such large numbers the White House could hardly cope. The March of Dimes began in 1938, transformed fundraising and collected hundreds of millions of dollars.

Then, success. Salk got to the finish line first with an inactivated virus vaccine, earning him popular adulation, though not necessarily the respect of his peers. Albert Sabin, a bitter rival who developed a different, live virus oral vaccine approved a few years later, dismissed it as “kitchen chemistry,” arguing the University of Pittsburgh scientist had simply put together findings others had made. Still, thanks to both, cases plummeted.

Medical workers wait to receive the first dose of the Pfizer BioNTech vaccine Covid-19 at the National Medical Center vaccination center in Seoul, South Korea. After a year or so of Covid-19, we have vaccine breakthroughs, but we’re not yet near the finish line; eradication is distant. (REUTERS)

After a year or so of Covid-19, we have vaccine breakthroughs, but we’re not yet near the finish line; eradication is distant. There are too many unanswered questions. We don’t know enough about how immunity works after illness or vaccination, nor do we fully understand transmission. Cases go untraced. The goal of today’s shots is to bring down mortality rates, and to keep health systems running. Children will not be immunized for months. Eventually, though, the target will shift. Victory will require mass and even routine inoculation while tackling significant skepticism.

As that happens, it’s worth considering that the world has been here before. There are lessons to carry into the 21st century.

At the most basic level, it’s clear that central government-led policy — leadership — is crucial at every stage, from supporting vaccine development to dissemination. The official decision to get behind polio inoculations didn’t guarantee a cure, but without support would have taken far longer. So too with Covid-19. In the U.S., Operation Warp Speed, a $12 billion-plus effort to fund vaccines, was a rare bright spot in the Trump administration’s otherwise dismal handling of the outbreak. Investment in manufacturing may have saved months. It’s a pity so much time was wasted by the same officials, failing to plan adequately for the actual injections.

A sound strategy will have to include insuring that even the least-affluent countries have the necessary healthcare structures, without which routine immunization, cold chains to preserve vaccines, timely testing, monitoring and oversight — the basics for control of Covid-19 and any subsequent viruses — will be impossible. It’s a priority that has been neglected for too long already.

While good governance helps, poor decisions create disproportionate and lasting damage. In the U.S. campaign against polio, not unlike Covid-19, the first hiccup was dissemination. President Dwight Eisenhower’s administration simply did not see distribution as its role. That was “socialized medicine,” opposed by the then secretary of health, education and welfare. One official quoted in David Oshinsky’s “Polio: An American Story” suggested that an allocation program would “constitute an undesirable precedent.” Shortages plagued the early years of the campaign, as did inequities in access at a time when U.S. schools were only just being desegregated.

But what followed was worse. In the rush, inspection failures allowed tainted vaccines from one manufacturer, Cutter Laboratories, to get through and spread polio among children and their communities, leaving some 200 paralyzed and 10 dead. The pause that followed meant more than 28,000 mostly avoidable cases were reported in 1955, Oshinsky writes. The incident and the obfuscating official statements around it caused deep misgivings and still fuel anti-vaxxers today. It ushered in far tighter regulation in the U.S. and beyond, a boon. It also opened the floodgates to predatory litigation that kept large pharmaceutical firms away from vaccines, seen as high risk and low reward.

Trust is vital to success. It’s striking today to read accounts of a 1947 smallpox scare in New York during which, according to the city’s health commissioner, some 6.4 million people were inoculated in less than a month, most within two weeks. That’s spectacular compared to the current pace of Covid-19 vaccinations. Authorities at the city level were able to take decisions that might be impossible today, and there are questions on the exact figures. But a popular belief in science, clear messaging, and reports like that of President Harry Truman rolling up his sleeves helped stop the spread. In 1956, Elvis lent a hand in the polio fight when he was vaccinated on live television.

Rebuilding that confidence is tough, whether in politically polarized Western societies or regions like Pakistan and Afghanistan, where misinformation and threats have helped wild polio remain endemic. In 2003, rumors in northern Nigeria that polio vaccinations were contaminated with anti-fertility agents caused a devastating boycott. Five years later, the country accounted for nearly 90% of type one wild polio cases globally. Combating that means education and swift response to local concerns, especially in countries that may have competing priorities. Vaccine mistrust dates back centuries, but it’s far more pernicious in the age of the internet. It requires presence in communities, where peers can answer questions and concerns.

It’s vital, not just in developing nations, to get through to everyone with reason — not condescension, let alone coercion. There remains, to quote one British parliamentarian debating smallpox in 1807, the liberty of doing wrong.

History tells us that the best vaccination efforts are built on collaboration and coordination. We know that the U.S. and Soviet Union working together at the height of the Cold War was instrumental in testing the oral polio vaccine. In the 1960s, a Soviet freeze-drying technique helped provide smallpox vaccine doses for developing countries, supported financially by the U.S. Later, a global effort helped dramatically reduce polio cases — and even that might have happened more easily if the emerging world hadn’t been left to last, or cost had not dominated concerns for too long. The live vaccine has been crucial, but combined with poor inoculation practices has also led to a surge in vaccine-derived polio.

We’ve seen over the past few months that fast action is possible with investment and commitment. Full victory is more elusive. Aidan O’Leary, director for polio eradication at the World Health Organization, emphasized to me the importance of aiming not for coverage targets, but for zero cases. It’s relatively easy to get to 50% or even 70% coverage, and soon Western economies will rebound — but the countdown to zero implies that not even the most vulnerable are missed, and that’s tougher. It demands sustained investment and momentum.

The smallpox vaccine was discovered in 1796. After a false start, an intensified WHO eradication plan got under way in 1967. There are questions about compulsion, but the illness was vanquished by 1980. Not all efforts have had similar success, because illnesses have been harder to control, vaccines not fully effective or governments stumbled. The economic impact and financial focus on Covid-19 suggests success is more likely than ever before. Learning lessons from history can make it a triumph for everyone.

Clara Ferreira Marques is a Bloomberg Opinion columnist covering commodities and environmental, social and governance issues. This column does not necessarily reflect the opinion of the editorial board or Bloomberg LP and its owners.