Collectors of digital NFTs see a market worth the risk

Non-Fungible Tokens have generated nearly $2.5 billion in sales over the first five months of 2021 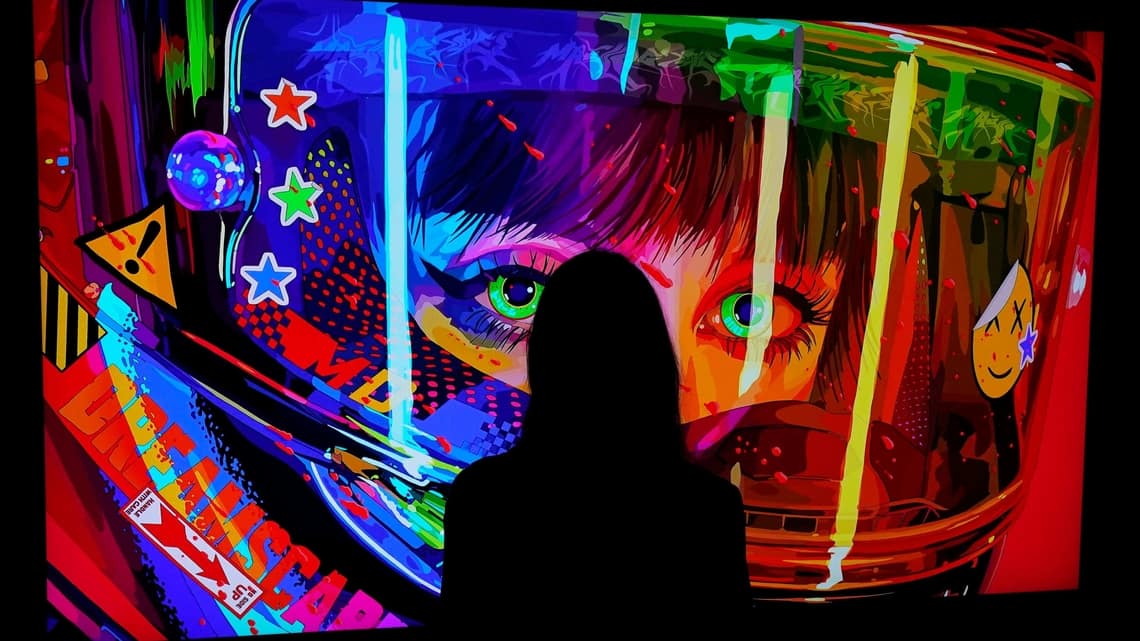 A woman looks at a NFT by Mad Dog Jones titled SHIFT// during a media preview on June 4, 2021, at Sotheby's for the Natively Digital: A Curated NFT Sale Online Auction to take place June 10, 2021. (AFP)

They are technology enthusiasts on the hunt for opportunities in the Wild West market surrounding NFTs: the popular certified digital objects that have spawned a new generation of collectors convinced of their huge potential.

Brandon Kang, a 25-year-old videographer from California, started buying NFTs in December, and already owns more than 500. In February he spent $50,000 for "Reflection," a digital work by electronic music artist Feed Me.

His collection includes digital images of simian heads (Bored Ape), a beverage can and a cube, as well as an animation of a car driving down a road, all of them created by artists little-known by the general public.

He displays them on screens in his house and -- with few exceptions -- has no plans to sell them.

Kang has made believers of some of his friends and family members. "One thing that they thought was cool is the way to verify ownership of these digital NFTs. It is truly a unique experience," he said.

NFTs - "Non-Fungible Tokens" -- are digital objects such as drawings, animations, pieces of music, photos or videos, whose authenticity is confirmed by blockchain technology, preventing forgeries or manipulation.

NFTs have generated nearly $2.5 billion in sales over the first five months of 2021, based on numbers from the specialized NonFungible website. The big auction houses now regularly sell them, as Sotheby's is doing through June 10 with its "Natively Digital" sale.

The ability to prove the authenticity of NFTs was decisive for Kang, long an investor in cryptocurrencies, which rely on the same blockchain technology.

Before, he said, "there was no way to prove and show ownership of digital assets cryptographically."

'Not easy to digest'

It was that same guarantee of authenticity that drove Devan Mitchem, a Singapore-based cloud engineer, to begin collecting digital objects, after at first being skeptical because of the "inconsistent formats, marketplaces and storage options."

But the emergence of websites like OpenSea and Nifty Gateway allowed artists to sell their works directly while enabling collectors to buy, store and resell them, making the NFT world almost as accessible as the stock market.

Mitchem, a blockchain specialist with Google Cloud, now owns more than 200 NFTs. Like Kang, he has no plans to sell them.

"It's risky, but I feel works created from 2017 through the lockdowns of 2021 will be remembered as the defining moment of this new category," he said. "This era will hold a special place in future portfolios."

Pankaj Patil, a computer engineer, last year sold some of the 150 digital objects he had acquired, fearing for the future of the NFT market. Today, this New Jersey resident said, "I definitely regret selling some of them," even as he acknowledges that "this space is not easy to digest for everyone."

Devan Mitchem said he can see why some people might have doubts.

"I can absolutely understand any skepticism," he said. "There are several things to unpack" about how NFTs work.

For anyone interested in exploring this new market, Mitchem offers this advice: "Read up on the philosophies behind blockchains like Bitcoin." That should make it clear, he added, that "these are global computers not owned by a single entity."

"It's still very much the Wild West," he said, "but also a land of opportunity."

Non-fungible tokens, or NFT, art pieces are seen during a media preview for the Natively Digital: A Curated NFT Sale auction at Sotheby's in New York City, U.S., June 4, 2021. (REUTERS)

Love of art, or money?

Kang, too, urged anyone intrigued by NFTs to do their homework before plunging in.

Those who "flood in the market without doing their research and not even making an effort to understand NFTs," he said, "will be the ones who will most likely be burned."

He adds that a recent market correction that saw a drop in both average prices and the number of transactions does not in any way threaten the future of NFTs.

"We are seeing the space mature, and I strongly believe it is good in the long term to remove the people who are purely trying to make profits" and are not motivated by love of art, he said.

Mitchem, like many others, insists he is drawn by the artistic value of many young digital creators, even if the public image of the NFT is largely that of a fad, if not an outright fraud.

He speaks passionately about "Picasso's Bull," a cubist depiction of a bull by visual artist Trevor Jones and which he purchased for $23,000. He calls it a "seminal piece."

NFT collectors, many of them computer programmers and most of them men, say they are also drawn by the constant innovation in the market.

They foresee a world in which NFTs can move between platforms, sites and virtual universes, unbound by the constraints of the physical world.

They also insist that the field is reducing its currently catastrophic carbon footprint -- due to the huge energy demands of underlying cryptocurrencies -- as it adopts new protocols for NFT creation and as less energy-intensive cryptocurrencies are developed.

Mitchem is such a firm believer in NFTs that he believes the term itself will disappear as the technology becomes commonplace. "It simply becomes digital media and digital assets," he said.

Also read: How virtual concerts became the new normal in 2020