Studies on whales, other creatures reveal how health is affected by a hard time, whether it’s a pandemic or a personal crisis 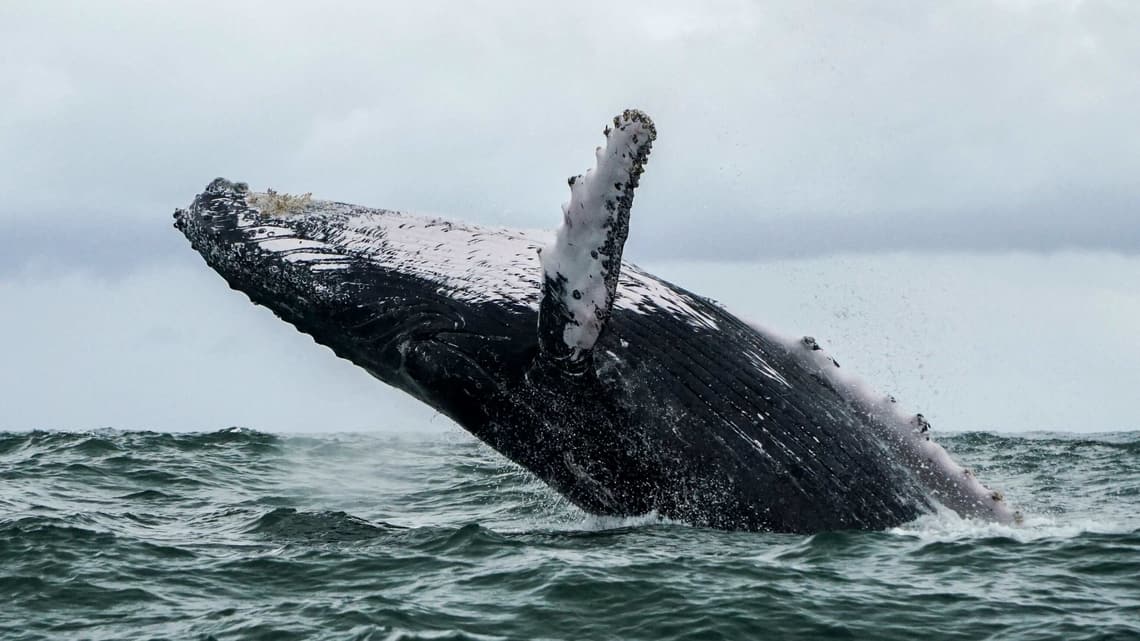 In this file photo taken on August 12, 2018 a Humpback whale jumps in the surface of the Pacific Ocean at the Uramba Bahia Malaga National Natural Park in Colombia. (AFP)

Considering how bad stress is supposed to be for our bodies, it’s still a confusing concept. Is it worse for our health to have too much work or too little? To have too much responsibility or to be bored? The covid-19 pandemic triggered lots of stress — even in people who never got the virus. It’s not clear how much the forced isolation, fear or job loss harmed our health.

But scientists are starting to identify the kinds of stress that damage us physically by studying other species — not just lab rats, but animals from whales to iguanas to fish. That research has already generated some understanding of the harms we have imposed on them through captivity, pollution and underwater noise. It might also help us understand the harms we impose on each other.

Decades ago, scientists established a questionable narrative that stress was associated with “Type A” personalities — people who try to do too much. Much of the foundational research was funded primarily by the tobacco industry. That research came out at a time in the mid-20th century when heart disease had been sharply rising in the United States in parallel with the rise in smoking.

Also read: How humans have changed ocean sounds under the sea

The tobacco-funded research propagated the message was that it wasn’t smoking that was killing people but our busy “modern” lifestyle combined with Type A personalities and behavior. But no reliable, repeatable studies ever backed up a link between heart disease and Type A behavior or personalities.

But others over the years suspected there was something valuable there that needed to be untangled. “It’s been so hard to define stress that people have made proposals that we jettison the world from science,” says Michael Romero, a Tufts University biologist. “For many years people were asking what is a stress response … It’s something that the body initiates in response to a noxious stimulus called a stressor,” he says. “And what is a stressor? That is something that turns on a stress response.” It’s a circular definition.

He says he had a flash of insight early in his career when he travelled to the Arctic — a wet, cold, and seemingly stressful place. It was stressful for him, but not for the native animals. They were adapted to live in that environment.

Marine iguanas bask in the sun at Galapagos National Park in Puerto Ayora, Santa Cruz Island, in the Galapagos Islands, some 900 km off the coast of Ecuador in the Pacific Ocean, on April 14, 2021. (AFP)

The current understanding equates stress with environmental conditions more than with behavior. Romero says unhealthy stress in animals comes from extreme weather events such as storms or floods – things that go beyond what they’re adapted to. The other major causes of stress are predators, famine, infectious disease, social conflicts and human-generated environmental changes — chemical and noise pollution, for example.

A few years ago, he studied marine iguanas in the Galapagos. A group of them survived a terrible oil spill, but those with the most elevated stress hormones were more likely to die months later. Another study in fish showed that those living downstream of a mining spill showed hormonal changes associated with stress.

In his favorite stress research technique, scientists measure stress hormone levels in Eastern right whales by using dogs to sniff out fresh whale feces, which contain stress hormones (and happen to float for about an hour after being deposited). Those studies revealed that noise and fishing lines create stress, but that whales’ stress levels plummeted in the days that ship traffic subsided, temporarily, after 9/11.

He says stress hormones represent an evolutionary trade-off. They can be lifesaving in an emergency by channeling energy to a fight or flight response.

And stress can help animals by shutting down fertility during times when it might be unfavorable to reproduce — when there’s too little food, for example. That’s been documented in humans, too. Women who have recently survived famines or been freed from concentration camps are unlikely to get pregnant.

There’s a popular idea about “the upside of stress” — which is the title of a popular TED talk and book by a psychologist who said she had once been wrong to tell patients to avoid stress.

The problem with that thesis is that if the source of stress is something people can avoid, then it probably isn’t the health-destroying kind of stress that’s killing whales and iguanas, and probably people as well.

A beluga whale rolled to its new habitat in a transport cart after arriving at Mystic Aquarium, Friday, May 14, 2021 in Mystic, Conn. The whale was among five imported to Mystic Aquarium from Canada for research on the endangered mammals. (AP)

Stimulation, challenge and excitement may be something we humans are adapted to live with – just as those arctic creatures are adapted to extreme cold. As I learned from biologist Lori Marino, a lack of challenge will also stress out and sicken captive marine mammals. When they’re in captivity, she said, people used to think they led “cushy” lives, with abundant food, safety and no need to work beyond performing in shows. But they die much more often of infectious disease than their wild counterparts even though they usually live in clean, filtered water.

They were clearly suffering psychologically, she says. Captive orcas are known to bash their heads against the walls and shatter their own teeth. “It becomes a situation where there’s really no escape … they are literally bored to death.”

While fewer animals are captured today, those born in captivity are still stressed. They may not know a different life, but evolution shaped them to live in an open ocean surrounded by others of their species — not the solitary confinement of a tank.(1)

The lesson for us is that it’s not enough to tell people to focus on the positive — or to avoid stress, which looks to be rooted in environmental factors rather than behavior. You might not be stressed by working 80 hours a week if you love what you do. If you hate your job, on the other hand, you can avoid one source of stress by quitting, but might risk replacing it with the stress of being short of money.

But maybe those animals can guide us toward ways to change the way we treat each other. That way we can help each other through the rest of this pandemic and be less vulnerable to the next one.

(1) The best solution to help already captive whales is to free them into sanctuaries, Morino says. They can’t be dumped back into the sea and survive any more than a city dweller could be dumped alone into a rain forest or desert.

Faye Flam is a Bloomberg Opinion columnist and host of the podcast 'Follow the Science.' This column does not necessarily reflect the opinion of the editorial board or Bloomberg LP and its owners.

Also read: With AI, researchers listen to the music of a spider's web