The area deforested in May, determined based on satellite images, jumped 41% compared to the same month in 2020 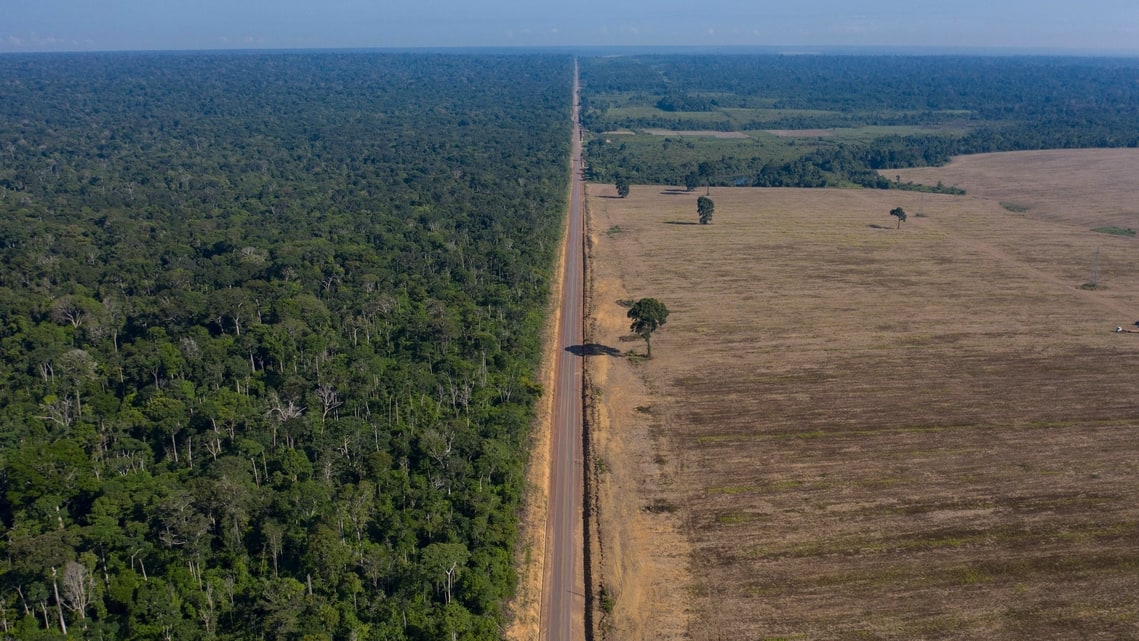 In this November 25, 2019 file photo, highway BR-163 stretches between the Tapajos National Forest, left, and a soy field in Belterra, Para state, Brazil. Preliminary data released on June 4, 2021, signaled deforestation of Brazil’s Amazon in May 2021 extended this year's surge compared to 2020. (AP)

The area deforested in May, determined based on satellite images, jumped 41% compared to the same month in 2020, according to daily alerts compiled by the National Institute for Space Research’s Deter monitoring system.

That data is considered a reliable leading indicator for more complete calculations released at year end.

May marks the beginning of the dry season in the Amazon, when deforestation tends to spike. Deforestation in the month reached 1,180 square kilometers (456 square miles), the most for any May in at least five years. April and March figures also topped all prior readings for those respective months since the 2015-2016 start of the data series.

The data comes as President Jair Bolsonaro’s government faces heightened scrutiny and skepticism regarding his recent pledges to rein in deforestation, and as officials including his environment minister are under investigation for possibly facilitating the export of illegally cut timber. A separate probe is investigating whether Environment Minister Ricardo Salles obstructed an operation to seize illegal timber; he has denied wrongdoing in both cases.

The Climate Observatory, a network of environmental nonprofits warned that the data released Friday marks a worrisome start to the dry season that is worst between June and August.

“If the trend continues over the next two months, the official deforestation rate in 2021 could end with an unprecedented rise,” the group said in a statement. Deforestation last year surged to a level unseen since 2008.

The annual deforestation tally, compiled with a more accurate system called Prodes, uses at least four different satellites to capture images. This helps to eliminate error caused by cloud cover in the satellite images of the monthly preliminary data.

Low rainfall in some parts of the Amazon from November to April complicates the outlook for destruction in the Amazon, where often trees are felled and then burned to clear land for pasture. Some regions, particularly those along the biome’s southern edge, have received 60% of their historic average rainfall, international environmental group WWF said in a statement.

May deforestation data “show an extremely critical situation,” Mauricio Voivodic, WWF’s executive director for Brazil, said in the statement. “In an environment with deforestation encouraged by federal government rhetoric and complete weakening of environmental regulation, this year’s drought added to the very high deforestation rates creates a situation conducive to big burnings.”

Also read: Almost 59 million hectares of forests have grown back since 2000