The idea of parenting erasing your identity is not a burden men carry. Women too must realise that all of a person’s identities can coexist and speak to one another 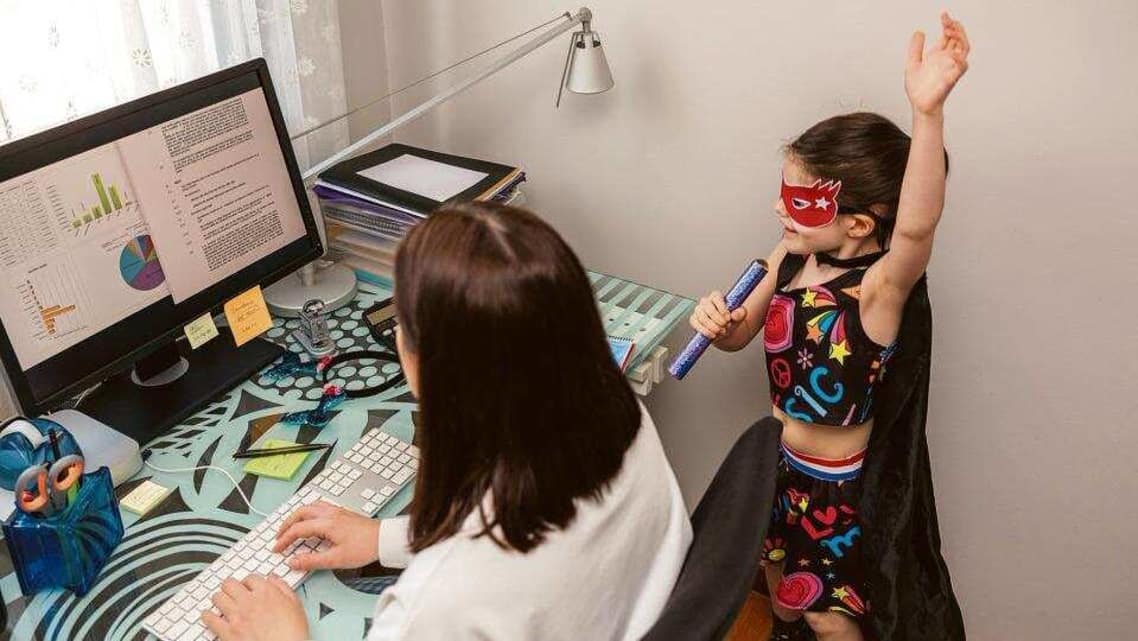 Don't let the discourse around motherhood limit you. Credit: ISTOCKPHOTO

I am teaching creative writing at Columbia University this semester. Under normal, non-covid circumstances, I would have an almost one-hour commute to and from campus. That would be one hour spent on the train looking at the blue-haired woman putting on her make-up or reading a book in which I might find a turn of phrase to make me stop in admiration.

A one-hour divide between home life and work life on the way to class, and then the same on the way home after class. An hour to stare blankly at whatever is in front of me while my brain resets and prepares for home.

Now there is no such break. I go rushing up the steps with a cup of coffee while shouting down to the babysitter that the children haven’t brushed their teeth yet and to please make sure they wear their helmets while riding bikes, and I think the younger one’s back molars are coming in so she hasn’t slept well and may be grumpy. And then I slam the door shut, turn on my laptop, and say good morning to my students. Three hours later, my brain still whirring with the conversation, my voice hoarse from speaking, it takes me under half a minute to close my computer and come back down to two children chasing a balloon across the living room. I have to stop thinking about work immediately in order to catch one of them as she is about to tumble off the sofa to the ground.

The first few weeks of the semester, I resented this lack of commute, this lack of divide between my life as mother and my life as writer and professor. How can I do either well, I whined self-pityingly at night.

My husband didn’t commiserate because, as usual, the idea of parenting obliterating the rest of your existence is simply not a burden placed on men. My husband can go about brushing the children’s hair with a conference call on his headphones. I have seen him carve a pumpkin with the children while humming a tune he is working on and then rush back to his home studio to quickly record what is on his mind. He can seamlessly coexist as father and composer and studio head and wear all his hats at once, pandemic or not (I have the good fortune of a partner who truly shares the load and if you do not, I suggest you take a two-hour nap every day and force him to learn to share the load. It’s good for you, it’s good for him, and it’s particularly good for future generations who are learning from you).

Motherhood becoming an Identity, with a capital I, separate from the rest of my identities, was a foolish idea of mine, bolstered, of course, by the world around me. In its simplified version, for a woman like me, the discourse around motherhood has followed this path: 1) motherhood means giving up everything else about myself in service to motherhood; I am not going to have children; 2) I am going to have children but why should motherhood mean giving up everything else about myself? I am still going to be the same woman I was before giving birth whenever I am away from my children.

To this—the realization that I am now always a mother but I am also everything else. All my identities coexist and speak to one another.

Thinking of these selves as separate entities is a burden placed only on women who are constantly asked versions of the question: How do you work (travel, eat, go out, have a life) and parent at the same time? And because the world asks us that, I had been asking myself that.

But as the weeks went on, I found myself enjoying the manic changes in my brain. I found my teaching and my writing and my parenting buzzing with a new energy. I give my class a short break and come down to refill my coffee and see what art projects my children are up to and then return to the conversation in the Zoom room. I like getting glimpses into my children’s lives as independent beings with me hovering on the periphery, not standing centre stage, available for all of their needs, and I like them seeing me dip in and out, mother and writer and professor.

The world will constantly work to define them but definitions are limitations and they don’t need any of that, and neither do I.

This is a fortnightly column. Diksha Basu is the best-selling author of The Windfall and Destination Wedding.