How a sibling averted attack from a predator

In a new illustrated book, Sherab Lobzang, a Ladakhi native, narrates a childhood incidence of encountering a snow leopard 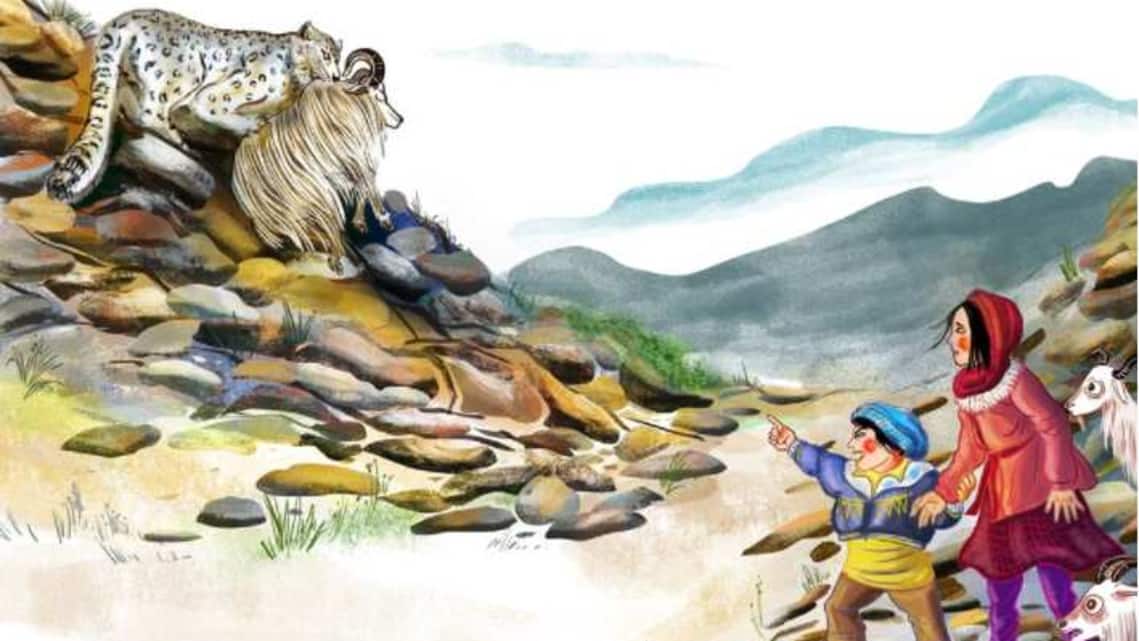 Sherab Lobzang and her brother spot the snow leopard with killed one of their goats. (storyweaver.org.in)

Growing up in Kumdok, a remote village of Ladakh, 14-yer-old Sherab Lobzang would often go with her parents to herd the village goats and sheep. One day she and her eight year old brother went herding alone, and that’s when they faced a snow leopard just a few metres away from them. The rest of story in 'Our Encounter with a Snow Leopard' narrates how Lobzang protected her brother and brought the village herd back to safety forms the story of, and without realizing, also saved another herder.

The 15 page e-book, with colourful illustration by Tanushree Roy Paul, is a heartfelt narration by Lobzang about facing one of the most elusive big cats in the world, otherwise known as the phantom of the mountains. It’s published by National Conservation Foundation (NCF).

An education coordinator with NCF field station in Leh, Lobzang recalled the incident, when she had to face the big cat for the first time. “I was so scared that I couldn’t move. But since I was the older sibling, I had to make sure we were safe,” says Lobzang (29). What was also distressing was that the snow leopard had killed a goat. The siblings thought of bring back the carcass of the animal but it was too heavy for them to carry. Reluctantly they left the place and focused getting the rest of the herd safely to the village. Lobzang, however, didn’t tell anyone about the incident for the fear of being scolded for not being more alert.

Her worry only increased when a friend went along to herd the goats the next day. Usually, when a villagers spot a predator during a herding trail they alert everyone so that others are better prepared to shoo it away. “Thankfully, he safely returned with the herd. I was so relieved,” says Lobzang.

Years later, while working with NCF, she found out that leaving the body of the killed goat back for the snow leopard to feed on was the reason why it wouldn’t have attacked after that. She also realized the value of snow leopards. “I used to think what’s special about snow leopard, as I had grown up seeing or hearing about it. In fact, retaliation killing would happen in villages earlier, when a livestock was attacked. It was only when I started working in conservation, I learnt about snow leopards, and why leaving the dead goat behind ensured that day ensured that it didn’t kill any more livestock the next day,” says Lobzang.

Snow leopards are categorized as vulnerable by IUCN, and conservation efforts are going on to protect them. Due to more awareness, people don’t remove the carcass of the livestock so that the leopards can feed on it.

Available in English and Bhoti (Ladakhi), the book can be read on Pratham Book’s free, open-source platform Storyweaver.