World Bicycle Day: A ten-day-long life-changing ride through the Himalayas

While cycling from Almora to Munsiyari, Indranil Roy learnt to tackle adversity head-on. And random acts of kindness by strangers all along the way made this ride all the more special 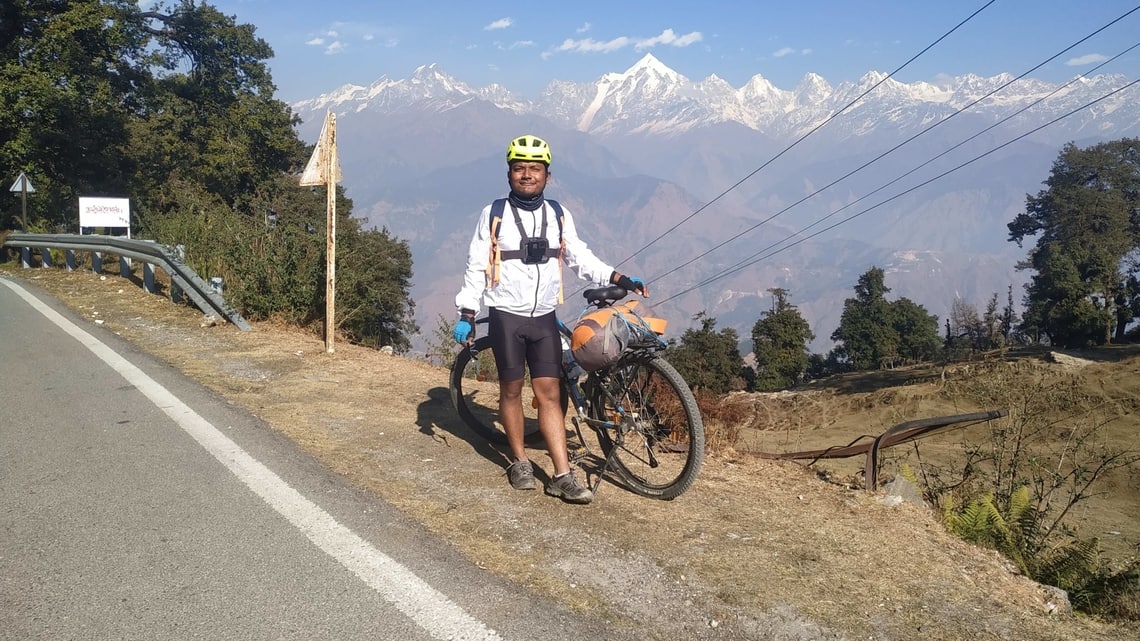 After spending an emotionally-charged nine months in Delhi during the pandemic, communications professional Indranil Roy simply couldn’t take it anymore. He felt the urge to get out of the city and stay in the hills of Uttarakhand for some time. He found a pristine cottage on Airbnb, situated on the outskirts of Almora, close to the Binsar Wildlife Sanctuary. “At that time, I was going through a deep mental turmoil. The pandemic only aggravated it. Getting out of the city was very important,” he says.

After moving there, Roy started to explore the landscape around his new home on a bicycle. As he grew comfortable with the terrain, a thought occurred to him -- of doing a 500-kilometre-long ride from Almora to Chaukori and Munsiyari, and beyond. Roy finally made up his mind in mid-November and chalked out his route. “I had no idea that there would be no road in some part of the route, or no GPS and mobile network. The only thing I knew was that I simply had to embark on this journey, and I am glad I did,” he says.

Getting the logistics sorted was a challenge. His bike didn’t have a carrier, for one. So, Roy visited a local shop, and after detailed negotiations the owner decided to send someone to Haldwani to get the carrier. Basic backpacks were bought from the local markets, and Roy tied all this together with ropes from a kirana shop. “All through the journey, I would have to stop to readjust the bags and the rope so that they didn’t fall off,” reminisces Roy. “But I was in a different mood. I had to return to Delhi in a month to take care of some professional engagements. So, I knew I had a limited amount of time.”

So Roy embarked on his sojourn through Kumaon on 27 December. Some distance away from Almora, the roads turned steep and dilapidated. The bicycle, loaded with 10 to 12 kilograms of luggage, endured quite a number of bumps and jolts. The first day was an eye opener, of sorts. After the Digital India campaign started, Roy had stopped carrying cash. He would make do with credit cards or UPI. While living in Almora, network was not a problem, and he could make do without any physical money.

However, things changed drastically when he moved out of the town. “I had no idea that there was no network to be found in these terrains, and hence UPI wouldn’t work,” he reminisces. “The first day, I couldn’t have lunch as there was no money. However, when I stopped at three places en route, people fed me tea and snacks, listened to my stories and told me theirs. No one charged me anything.”

His destination on the first day was Chaukori. However, the bumpy ride delayed things. It was pitch dark and Roy had to travel through a forest. The locals had told him many stories of leopards in the woods, who would jump at humans at night, and Roy was scared. The cycle’s headlights had stopped working. But then he chanced upon a family travelling in a car. The kind strangers guided him through the forest with the car’s headlights. “They were very patient and took me to a junction, from where my destination was only four kilometres away,” he says. At the junction, another stranger came to his aid -- a college professor, who was having dinner at a restaurant, took him to Chaukori in his car, with the cycle tied behind. “After surviving the first day, things became easier. It’s not like the drama ended or the adversities came to an end. It’s just that I became more prepared for them,” adds Roy.

Also read: Mountains aren’t simply out there to take selfies with

It is for this reason, when the bike’s chain broke on 29 December close to Quiti, a fairly large village located 44 kilometres from Munisiyari, he was able to maintain his cool. The chain was finally brought from Haldwani.

“And then in Munsiyari, I met a dhaba owner, who was graduate of Hotel Management Institute, Goa. I informed him a day before I was to leave for Almora, that I will come early for breakfast. When I reached the dhaba, he handed me a packet full of sandwiches so that I wouldn’t have to stop anywhere in my journey. It was really touching,” says Roy.