The visual artist would regularly escape to the jungles around his home, enjoying his communion with nature far more than with people. These childhood memories have continued to inform his artistic practice 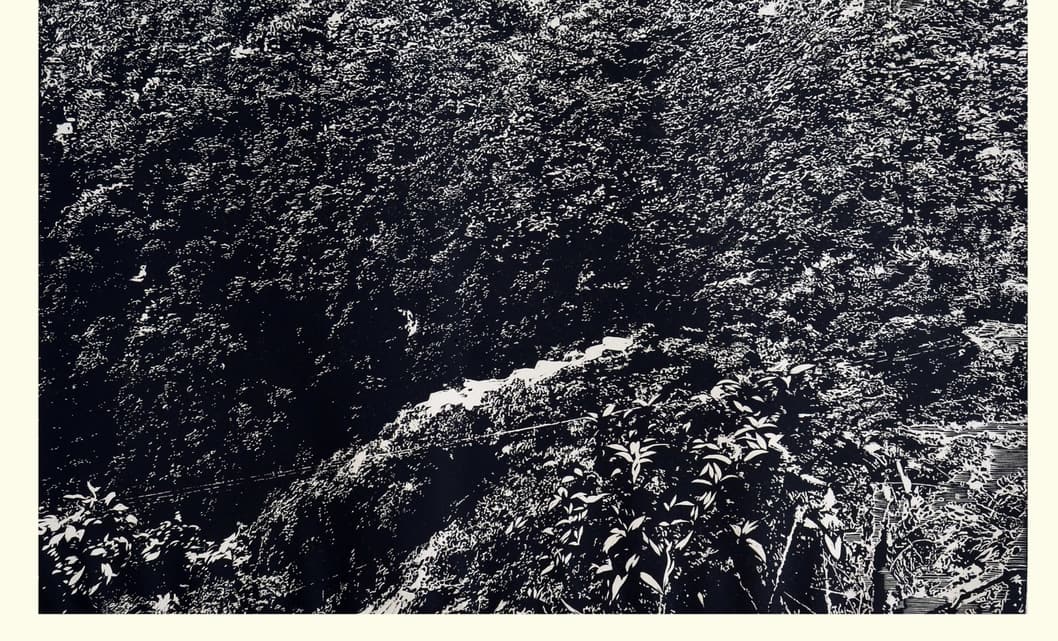 From the series ‘Somewhere in Northeast India’

Nostalgia and longing have often been potent sources of inspiration for visual practitioners. For Chandan Bez Baruah, it is the memory of the landscapes of Assam that informs his practice. He left his hometown Nagaon as a child for Guwahati, and from thereon went on to study printmaking at the Visva-Bharati University, Santiniketan. But the visuals of the hills and forests left behind stayed with him and those became a recurring imagery in his work. A certain sensitivity towards the ecology and its degradation added another layer to his process. This quest for sustainability led him to explore woodcut-printmaking, which also allowed him to create detailed images of landscapes. In his recent series, ‘Somewhere in Northeast India’, one can see lovely monochromatic renditions, which emphasise the play of light on the dense vegetation.

Certain influences in his childhood have informed his visual vocabulary. For instance, bhaona, a traditional performing art, with its props, masks and music, has had a huge impact. “Both my parents were active participants and I got emotionally involved with it too. Later, I started experimenting with art and music,” he reminisces. His father eventually sent him to an art school to nurture his talent. Soon after the family relocated to Guwahati but the seeds for creativity had already been sown.

view all
Woodcuts have not just allowed him to explore memories of homeland, but also express anguish about how urbanisation is slowly taking over nature.

In Guwahati, Bez Baruah joined a school, which functioned under two large banyan trees. There, he was encouraged by an empathetic teacher, and that led him to pursue a degree at the Government College of Art and Craft in the city. At an exhibition in his college, he saw a presentation on a wide array of printmaking processes such as lithography, etching, and woodcut. “I found this to be a very sensitive yet complex subject. Gaining command over it was like a lifelong quest,” he adds. Bez Baruah has been fortunate to have masters like Ajit Seal and Dilip Tamuly as mentors. While Seal gave exceptional guidance on techniques, Tamuly provided direction to his expression. While his attraction to the woodcut printmaking process grew, he was surprised to know that the medium was not accepted as high-art. At a subconscious level, this became an added motivation for him to make woodcuts his chosen media.

When he moved from Guwahati to Delhi in 2017, Bez Baruah began working on ‘Somewhere in Northeast India’. This not just allowed him to explore memories of homeland, but also express anguish about how urbanisation was slowly taking over nature. He began using photographs as references for his imagery. “I was brought up in these forests. These ecological and nostalgic connections can be seen through my work,” he says. “When I lost my mother at a young age, I was deeply disturbed. And then when we shifted to Guwahati, I became lonely”. Bez Baruah began to ‘escape’ to the hills around his home in the city. “I literally had conversations with the hills and trees. I enjoyed my talks with the jungles more than with my friends,” he confesses.

Bez Baruah experiments with printmaking using both traditional and unconventional methods. Trees are his friends and therefore wood is very familiar to him. During the image-making process, he tides through a wave of emotion. “I go deep down the memory lane and this creates a peculiar attachment with every frame of work,” he says. The artist is very conscious about the accuracy of every detail. His realistic approach often leads to a slow and laborious process. “I enjoy the involvement with each landscape during the carving and cutting of wood. This makes it a lot more than mere reinterpretation of photographs,” he adds.