Besides ferrying the ill, the ambulances owned by the Kalias, are helping with funerals during the second wave 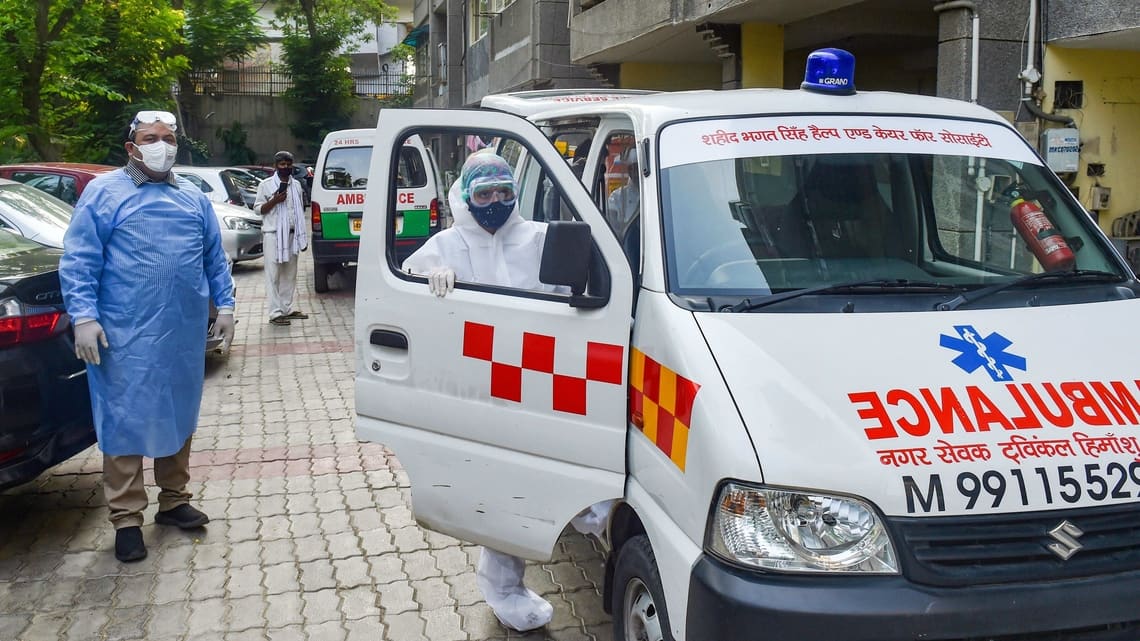 At a time when most people are again restricted at home due to lockdown, Himanshu and Twinkle Kalia spend their days between helping the ill get a fighting chance at life and ensuring dignity in death for those who don’t make it.

As the second wae of Covid-19 ravages large parts of India - including the national capital that has seen thousands scramble for oxygen, hospital beds and crematorium spots - the Kalias, known as Delhi’s ‘ambulance couple’, ferry the ill to hospital, fetch medicines, arrange funerals and sometimes, step in to perform last rites too.

Cloaked in PPE suits, face shields and masks, the Kalias go where even close relatives fear to tread. They make sure their fleet of 12 ambulances are road ready to tackle any emergency.

"We don't put it in records but in the second wave of coronavirus we have been helping almost 20-25 patients daily to reach hospitals. We have performed cremations of 80 people, who have died of Covid-19, and helped over 1,000 people in arranging for cremations," said Himanshu. It’s all free of course, adds the 42-year-old hastily.

A few days ago, they got a call from Mayur Vihar in east Delhi about a patient who had died in an auto rickshaw on the way to hospital, said Twinkle. "We got a call from Sandeep Mitra whose wife Madhura had collapsed in an autorickshaw while he was taking her to a hospital. He was not getting any help from his society or elsewhere. We reached there, got a doctor to the spot and performed her cremation at the Sarai Kale Khan crematorium," said Twinkle, who lives in in Pratap Nagar in north Delhi.

The 39-year-old is a cancer survivor and the couple has two daughters, Japji (13) and Riddhi (7). But personal commitments don’t come in the way of their zeal to help others in these days of India’s most serious health crisis.

Twinkle and Himanshu Kalia have received several awards for their charitable work over the years. . (PTI)

At a time ambulances are in short supply and stories of ambulance drivers and owners fleecing those in need make the rounds, the Kalias have publicised the free services of their fleet. Himanshu’s mobile number has been pasted at various places across the city.

As a result, he said, distress calls come in from all over Delhi and also from Ghaziabad and Noida. The word has spread and some hospitals have also started reaching out. Some know him for not just services but also his skills behind the wheel, he said proudly. "Due to my fast driving, even through traffic, many hospitals call me in emergency situations to save the lives of patients," he said.  And sometimes the ambulance has to do the job of a hearse. Besides strangers, the couple also support their team of 18 people. Both Himanshu and Twinkle also work as insurance agents and said they spend their earnings in serving humanity.

The ambulance service started in 2002 when his parents-in-law gifted him an ambulance, said Himanshu. He then built it up steadily adding vehicles over the years. Six of the ambulances are parked at their residence and six in another location.

The couple have also received many awards for their charitable work over the years. In 2019, Twinkle was awarded the Nari Shakti Puruskar by President Ram Nath Kovind. Four years before that an organisation in Dubai honoured her as the ‘First Woman Ambulance Driver’, while Himanshu got the ‘Ambulance Man’ award in Malaysia in 2016.

Hoping to ramp up their work of facilitating hospital admissions, blood donations and arranging funerals, the Kalias said they have expanded their team. As millions of Indians battle infection and death, there are many more miles to go and hurdles to cross, the couple believed.

Also Read: For parents behind bars, pandemic cuts into visits from kids