Love and other demons

Fatima Bhutto’s new novel, as its title promises, tells the story of runaways—of three such characters, to be precise. Their journeys begin in distant corners of the globe, as far apart as contemporary Pakistan and Britain, but converge around halfway through this doorstopper of a book, in Iraq. It is in the epicentre of an ongoing war there, which is destroying the locals as well as sending out shock waves of terror across the world, that Bhutto’s story reaches its giddy climax. With its audacious sense of drama, Bhutto’s cinematic grand finale brings to mind the apocalyptic vision of Quentin Tarantino’s Inglourious Basterds, though The Runaways isn’t without its glitches.

In its scale and ambition, the book seems to signpost its affinity with what has now come to be broadly identified as the “global novel". It is useful to refer, in this regard, to literary critic Adam Kirsch’s influential essay defending the genre in The Financial Times in 2017. “The global novel is the latest, inevitable evolution of a genre that has always tried to capture the way we live now," he wrote. “At its best, it may even stimulate the empathetic imagination of difference that a globalised world so direly needs." Written before the appearance of Bhutto’s novel, these sentences seem to illuminate the scope of the book down to its last detail.

The thematic ingredients that go into the melting pot of the plot of The Runaways tick all the right boxes. Most of its distinctive elements—the persecution of religious minorities in Pakistan, for instance, or the flight of disaffected British-Muslim youth from their homeland to embrace the call to jihad, or scenes of unspeakable cruelty in Mosul—may seem like local problems. But just as chaos theory says that the flapping of a butterfly’s wings in New Mexico can cause a hurricane in China, the ripple effect of local problems usually leads to far-reaching repercussions for geopolitics.

The tragedy that befalls the three runaways in Bhutto’s book is so painfully real and familiar to most of us now that it may have assumed a certain banality. The stories she tells are the ones that are splashed across front pages, websites and digital screens. Fiction and non-fiction have already mined the possibilities of such tales extensively. Tabish Khair’s 2016 novel, Jihadi Jane, for instance, drew on the real-life story of Colleen LaRose, an American woman with a dark past who turned to Islam, before becoming a full-blown jihadi. In Khair’s crafty imagining, LaRose morphs into two young British girls, who flee their homes to offer their services to the Holy War. The leap doesn’t end well for either of them.

An ISIS fighter with the ISIS flag in Raqqa in June 2014. Photo: Reuters

Bhutto plays on similar tropes of desertion, allegiance and betrayal, but also allows for more psychological complexities. For those of us who follow contemporary fiction, another novel with a nod to the Islamic State (ISIS) may not be the most exciting reading, especially considering the girth of The Runaways. But persistence, at least in my case, paid off, and after the first 100-odd pages, this 400-plus-pager set off on a steady trot.

The story opens with Anita Rose, a young Christian Pakistani, as she makes a sneaky exit from the country. We don’t know her destination but the clandestine nature of her journey ushers in an air of foreboding. Triangulated with her story are the tales of two men—Monty (aka Mustafa), who leaves his golden nest in Karachi’s posh Clifton area for the grittiness of Mosul, and Sunny (aka Salman), a second-generation British Muslim, who is disenchanted with his life in Portsmouth. Bhutto attempts a trick to link the fates of these three runaways by introducing one other character, Layla, midway into the narrative—though it doesn’t take long to figure out her real identity.

In spite of its gradually quickening pace, it would be a mistake to seek from The Runaways the easy gratification of a thriller. For the questions it asks are profound: What makes people want to flee the relative safety of their homes, even when home comes with its thorns of humiliation (as in the case of Anita Rose)? Is it a primal death wish that makes them plunge headlong into danger—or is such an impulse linked to the desire to annihilate a self that’s abhorrent (Sunny’s story bears out this hypothesis)? And finally, could love, or rather heartbreak, make people so oblivious to danger as to push them into an abyss from which there is no escape (Monty’s descent from his precious perch in Clifton to the monstrosity of Mosul is a case in point)?

Sunny is perhaps the most fully realized character of the trio. His life story intersects with class, religion, ethnicity and sexuality to create a web of contradictions, making him achingly human. His ambivalent feelings for his cousin Oz, who leads him into Mosul before revealing himself as a turncoat, are rendered as pure, visceral rage. Sunny’s sense of betrayal is shorn of the slightest trace of redemption or the barest whisper of reconciliation.

In contrast, Monty’s lovelorn emotions for Layla, for whom he leaves home, seem almost embarrassingly trite. “Until Layla, it had simply not occurred to him that all lives were lived in glass houses," writes Bhutto about Monty. “And one’s duty as a conscious man was to be a stone-thrower." Bourgeois guilt, fuelled by the hankering after a pretty girlfriend, who ups and leaves one day, provokes Monty to cast the proverbial stone. Whatever nobility there is in his gesture is obscured by his blinding self-interest.

In Anita Rose, Bhutto has a useful cipher, one that packs in several levels of conflict. She is doubly marginalized for being a Christian and a woman in Pakistan, though she rises above her limitations eventually. Juggling multiple masks that never come off entirely, Anita Rose steadily recedes into being an idea, rather than a living, breathing woman with a war going on inside her own head.

Compared to Bhutto’s last novel, The Shadow Of The Crescent Moon (2013), set in Mir Ali in Waziristan, The Runaways has a more expansive canvas, not only in terms of geographical scope but also the psychological depths it plumbs. In spite of its unwieldy capaciousness, it espouses a fundamental truth about our scarred times: that nothing can insulate anyone from the vagaries of a violent and vengeful world any more. 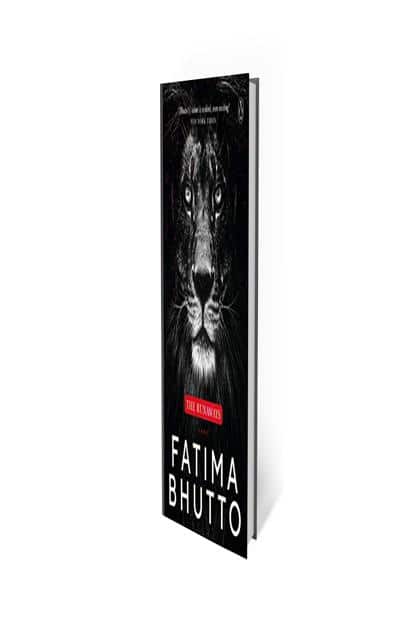