John le Carr, the undisputed master of spy fiction, presents us with several prisms with which to view the spy games of the recent past

Old spies never really retire but, unlike army veterans and journalists, they don’t fade away either. The world they inhabit has changed dramatically, from the barely remembered European theatre of the Cold War and spy exchanges to one of masked men—terrorists, militants, radicals, extremists—who are suddenly upon us. But the essence of a good spy, or even a bad one, remains the same. They infiltrate the enemy ranks, make useful contacts and friends (assets), ferret them out when things get tight, try not to get drunk too often, kill if necessary and keep feeding headquarters with information, hopefully useful.

The end of the Cold War and the advent of newer technologies have made the art of spying tedious. The enemies are not evenly matched (machetes and vans versus drones), and their tactics differ as widely as the colour of their skin and religion. Globalization has turned spies into practitioners of industrial espionage, targeting investments and dwindling natural resources. It is in this unfolding scenario that John le Carré, unrivalled in spy fiction, makes a return with a reminder of the world as it was, the world of George Smiley’s espiocrats, in A Legacy Of Spies.

Espiocrat: It’s a word that in all probability was invented by le Carré. Espiocrats are, of course, the bureaucrats inhabiting the world of espionage and if you’ve ever met one, you would know instantly that there is no better word in the English language to describe them, their disposition, their mannerisms, their devotion to keeping secrets and their belief in, well, something—if not the nation, then an ideology, the existence of an enemy at any rate, across the border and within nations. 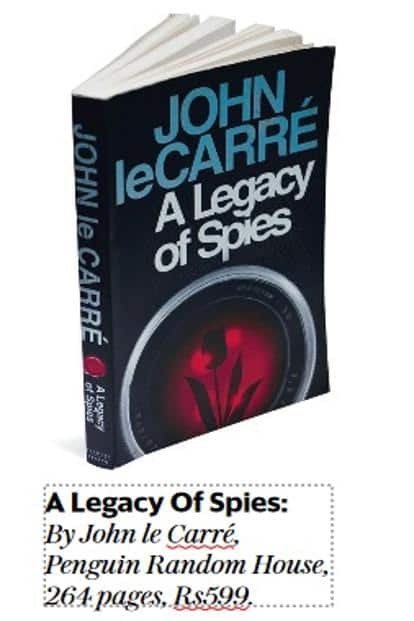 Le Carré draws upon meticulous research of the external world (when you decide to exfiltrate an agent in danger, for instance, how do you decide which route to take? Safe houses…what do they look like?). Equally, Legacy offers the reader a peek into the spy’s mind at work. Ex-fieldman Peter Guillam, making a reluctant return from retirement in France, is left pondering questions of history—unresolved relics—on the role of spies, and their motives.

Guillam must travel to London to testify before MI6 lawyers who are livid that a lawsuit brought by the children of three murdered agents might expose the British agency as incompetent or, worse, recklessly run. Whom can you blame for the tragic turn of events? Peter? The traitor Bill Haidon? A departmental turf war? Some awful decisions? What was the motive behind getting Peter, the protagonist, to befriend and entrap the beautiful East German asset, Doris Gamp (codename Tulip), and the English Communist Liz Gold? Given carte blanche by Smiley to deny away, Peter is confronted by MI6 lawyer Tabitha with an alternative narrative.

“You begin to see the picture? You’re a professional Lothario hired by the British Secret Service, and you roped in susceptible girls as unwitting accomplices in hare-brained operations that fell apart at the seams. True?"

Le Carré presents us with several prisms with which to view the spy games of the recent past—Peter feels hard done by because he was merely following orders; Tabitha and her fellow interrogators couldn’t put a lid on the legacy of Cold War spies fast enough; and there’s the truth according to Gustav, Tulip’s abandoned son, drilled into him by Communist East Germany:

Peter falls in love, and betrayals follow. Were they mistakes or sacrifices? You can almost see Adrian Haldane, a veteran spy, step out of the pages of The Looking Glass War, “Do you know what love is? I’ll tell you: it is whatever you can still betray."

The Cold War is over, and Guillam wears a hearing aid. Communism stands defeated in the West—how appropriate that the brief guest appearance made by the only known, real-life character in the book is by none other than the Indian-born founder of the Communist Party of Great Britain, Rajani Palme Dutt. Much of the history will go to the grave with its espiocratic custodians. In the meanwhile, we are fortunate to have a writer like le Carré among us.

Savour this offering by the undisputed master of spy fiction. Legacy is his first Smiley novel in 25 years. Let’s hope it’s not the last.