How this artist's relationship with space changed during covid-19

Visual artist Samanta Batra Mehta feels that this period made her re-examine ideas of safety, comfort, isolation, togetherness and gratitude 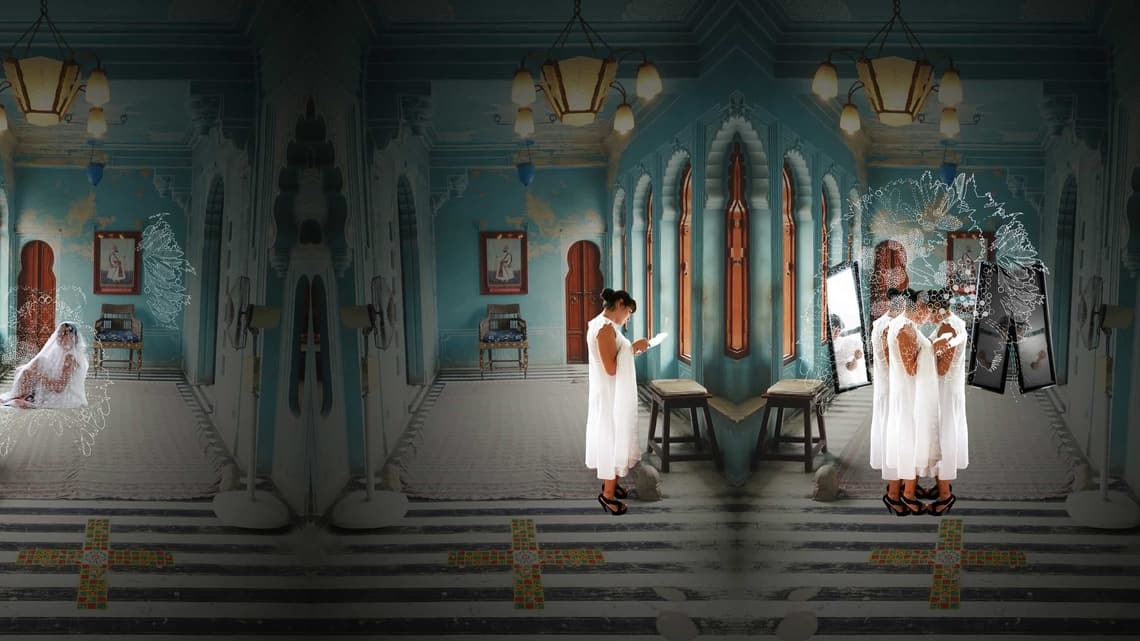 'A Space in Between' by Samanta Batra Mehta

Visual artist Samanta Batra Mehta often works with altered images and intricate mark-making. Her practice revolves around the notion of identity and space, where the idea of femininity motivates the very act of creating. Her sense of physical space has undergone a marked change owing to the covid-induced isolation and locked-down way of living. Mehta feels that it has led to a heightened intensity to even the mundane tasks we engage in. “The pandemic made us re-examine the interior spaces and where we stand within them. It has reimagined safety, comfort, isolation, togetherness and gratitude” she says. This period has made her question the very purpose of making art, and as a result, she believes, her work is gentler and more thoughtful, and the approach that is spiritual. In an interview, the artist speaks about her practice and concerns:

The idea of identity, investigated through the symbol of skin has been important in your work. Please elaborate the genesis of this exploration. Is it autobiographical?

The genesis feels both topographical and autobiographical. When I moved to New York from Mumbai, my experiences as a foreigner, an immigrant, “the other” informed these explorations. Thus, I spoke of displacement, dis/location, and about negotiation of our identities based on our skin. Maps also became important in my work. The mapping of the body, the maps on the skin. I reflect upon skin as a marker of personal histories—such as child-bearing, migration, motherhood, illness, health, ageing, the passage of time. The skin acts as a veil, a mask and a boundary between interior and exterior spaces, between the private and the public. The skin is a keeper of secrets. The skin is the container (of longings, memories, emotions).

Space and architecture take on a greater role greater in your photo-based works. And often elements from nature form the context. How do they contribute to the underlying conceptual framework?

The protagonist in my photo-based works is often within a courtyard, a room with windows, or between buildings and pathways, that is, spaces where there is a delineation and juxtaposition within entries or egresses. I’m interested in the dichotomous, the in-between, the confluence. What is/what could be. What is/what isn’t. What is manifest and what remains hidden. Spaces we inhabit and spaces we are not “supposed” to. Containment and desire also come to mind. I am also interested in the idea of home, the domestic. Home as a physical space and also something we refine along the way. Nature evokes land, expression, imagination also subjugation.

Also, how does the intertwined female figure and landscape form a ‘metaphor and site for colonisation and transgression’?

The (female) body and land are used as interchangeable metaphors. Through the arc of history, the female body/mind, like land, has been a site for fertility, germination, growth but also for control, colonisation and transgression. Even today, consciously and unconsciously, the lives of women are built around and enmeshed within unequal social structures maintained through time. We find ourselves constantly navigating and negotiating these spheres of control for social valence and safety. It affects the way we live, think, organise and locate ourselves. For those who have tremendous privilege and power accorded to them through these structures, there is opportunity and responsibility to learn, change and co-create together- so we can all be deemed equally human. I am emphasising collaboration and shared agency.

Also read: An artist's relationship with the distinct Andaman landscape

Your recent works have used intricate mark making, akin to traditional Indian miniature style, and books/printed paper. Is there a departure in this body of work? What is the focus of your expression through this?

I keep coming back to things and process that have given me joy. Yet, with each return journey, there is discovery and surprise. The joy of creating is that we start with something and then we experiment and play. Deep within these spaces of unknowing also lies the seat of past experiences, memories, influences: like the evocations of miniature painting. A lot of unconscious process is involved in creating. Energies evoked from materials like paper, paint, vintage objects- and also feeling states and visualisations that wander into my mind when I’m not consciously thinking, are all points of departure. Also, old work informs the new. So yes, there is a departure but also a coming-back-to because most everything comes from something in our past.