Love stories can be more than mundane stories about couples. These four graphic novels prove just that

Some people refer to Craig Thompson’s Blankets (2003) as a children’s book, even though he describes it as an “illustrated novel". I read it decades after people stopped referring to me as a child, and was moved by how poignant his love story masquerading as a memoir was. There was little in there for me to identify with, considering it is set in the American Midwest and focuses on the author’s upbringing in a strict Christian household. And yet, its insightful depiction of a simple young man trying to reconcile his parents’ beliefs with his love for a ravishing woman, somehow felt universal.

These are black and white drawings of surprising power, deployed to trace the author’s early adulthood, with its years of Bible studies, religious camps, strict parents, and his sudden meeting with a girl called Raina who shakes up his world and makes him question it all. To talk about young love is difficult, because so much of it tends to walk the line between bathos and melodrama, but Thompson pulls it off admirably, sometimes conveying the ache of sexual tension and grappling with received notions of right and wrong within a single frame. 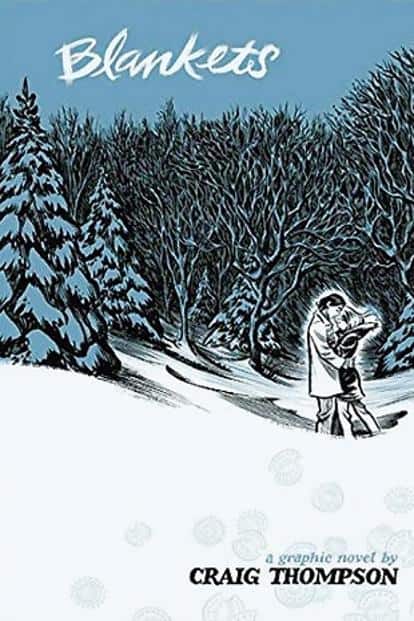 British cartoonist Posy Simmonds takes a cold look at how we approach love long after adolescence. She first did it as a serial cartoon in The Guardian in the late 1990s, channelling Gustave Flaubert’s flawed character Madame Bovary into the tale of a sensual British expatriate called Gemma Bovery, who moves with her husband to Normandy and promptly settles into an affair with a local young man. A baker finds out about this, falls in love with her himself, and tracks her gradual decline and struggle with former lovers, before inadvertently playing a minor role in her death. If this sounds tragic, it is actually more satirical, helped along by Simmonds’ sharp dialogue and effortless drawing. It’s also what isn’t being said that makes this a compelling love story, from the baker’s obsession with Gemma to her own inability to choose between her husband and her opportunistic lovers.

Shortcomings (2007), by American cartoonist Adrian Tomine, is less about love and more about race, but uses that touchy subject as a powerful line of inquiry to hold a relationship under a microscope and question what a love story means in contemporary America. On the one hand, it is about a rather rude Japanese-American misogynist called Ben Tanaka and his long-suffering girlfriend Miko Hayashi. On the other, when the relationship turns sour and Ben is forced to examine his own behaviour, it becomes a minor treatise on the Asian-American experience and how it gets in the way of two people trying to be together. If you’re looking for a graphic novel that almost plays out like an art film, this is it. My favourite love story in the graphic novel format comes from two Brazilian brothers, the artists Fábio Moon and Gabriel Bá. Their book, Daytripper (2010), isn’t about something as mundane as the love between a man and a woman. It reaches out for something more epic by telling, and retelling, the story of Brás de Oliva Domingos, a journalist, son, father, friend and lover who must, with the end of every chapter, come to terms with his own death. That he makes a living writing obituaries only makes the writing more delicious. There is no straightforward narrative arc or linear storytelling, and it is full of those touches of magic realism that only some Latin American writers manage to employ without descending into caricature.

This is also the most colourful of all the books listed here, full of vivid patches and mood-altering pastels that complement these singular tales perfectly. Brás dies at the end of every chapter. We know he’s going to but, before he does, he leaves us with a lesson about love and how life-changing it can be. There really is no comic book like this in stores today—a seemingly inchoate series of tiny tales that mysteriously take the form of a novel as we approach the end. All one is left with are relief and compassion, a sense of the completion of a journey, which is what all great literature aspires to make us feel.