When John McEnroe is all heart (well, almost)

In his autobiography, 'But Seriously', John McEnroe introspects on what his biggest tennis rivals have come to mean to him

Among tennis fans of a certain vintage, you will find two distinct camps. One hates John McEnroe and thinks he’s a brat and a boor. The other thinks he’s a genius with that tennis racket, a rare and incandescent talent. The boorishness, the second camp believes, is just one facet of a complex, highly-strung, fascinating persona.

No prizes for guessing which camp this particular fan of that particular vintage belongs to. McEnroe played tennis like nobody before or after him—and yes, I mean Rafael Nadal and Roger Federer too. At his peak—indisputably the year 1984, when he lost just three times—he had no weaknesses. Rabbits to the slaughter, I remember thinking at times that year, as he carved opponent after opponent into helpless despair on court. He won Wimbledon and the US Open with sublime dissections of Jimmy Connors and Ivan Lendl, respectively. One of his losses was in the final of the French Open, to Lendl, after leading by two sets (another of his losses was to Vijay Amritraj). Thirty-three years later, it is still the best season any male tennis professional has ever had.

But what might say more about McEnroe than that remarkable season is this: After 1984, he never won another Grand Slam (he only ever reached one more Slam final, losing the 1985 US Open to Lendl).

After 1984, we fans (of a certain...) thought McEnroe would dominate the game for years. Instead, he began losing, even to journeymen on the tour, men he would ordinarily have brushed aside. For me, this is what makes him such a compelling figure. It’s the way he introspects and analyses intertwined success and failure that makes his books such an absorbing read.

He calls But Seriously an autobiography, though that’s a rather loose use of the word. This is hardly a linear chronology of a life, and, in any case, his superb 2003 book You Cannot Be Serious is also in the nature of an autobiography. What you’ll find in this one is McEnroe’s take on some event in the years since he retired, meandering seamlessly into musing about life’s constant lessons. Sounds odd, but the thing is, it works. McEnroe is irreverent and profane, but also thoughtful, clear-headed and insightful, and that’s what shapes this book. 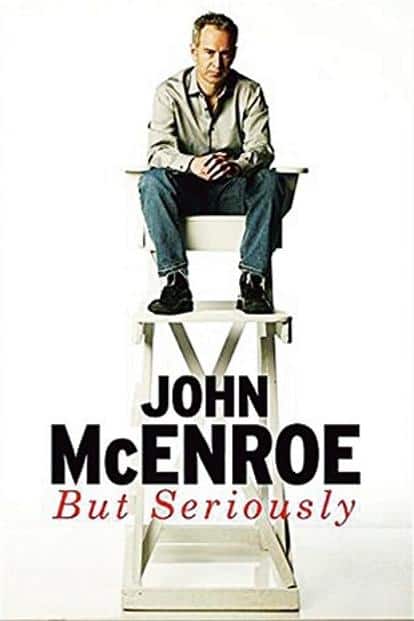 Take the notes about fellow tennis players, sometimes just in passing. Like in 2008, when the arcane rules of Wimbledon had a guard refusing McEnroe entry to the dressing room because he might be “a security threat". Yes. “This was me," Mac exclaims. “If it was Jimmy Connors, I could understand." Which is more than a hint at the always frayed relationship between the two stars. But later in the book he writes of an exhibition against Connors in 2014: “I was actually happy to be playing Jimmy again... in a funny way, I’d almost missed him." Yes, there’s respect too.

Or there’s poker-faced and insanely competitive Ivan Lendl, whom Mac openly disliked in their playing days. It didn’t help that the most painful loss of his career was to Lendl—that 1984 French Open final. Now he writes of playing Lendl in senior exhibitions that are just as intense as in their youth. But over time, he is able to understand what Lendl has done for him: “I respect Ivan for what he accomplished on the court, and I now accept that we made each other better players."

And this acceptance allows them a charming—if that’s the word—titbit from the 2016 Wimbledon final. Lendl is coaching Andy Murray and McEnroe is helping coach his opponent, Milos Raonic. Before the match, Lendl and McEnroe meet in the bathroom and Lendl says: “Shall we have a bet about who needs to go to the bathroom first to take a piss?" How does that turn out? “Ivan’s player may have won the battle out on the court, but my bladder had won the war that really counted."

In contrast to Lendl and Connors, McEnroe actually liked his greatest opponent, Björn Borg. While their playing styles are totally different, he says their personalities are more alike than most people realize. That’s the basis of their friendship. Also, as with Lendl, he knows that having to find ways to beat Borg made him a better player. This is the context for one of the more moving passages in the book, in which McEnroe explores what Borg has come to mean to him. Of Borg’s sudden retirement at the age of 26, McEnroe writes: “In a strange way I felt that something was taken away from me: an opponent strong enough to push me on to better things.... I don’t want to say it was like a bereavement (but) in later years I understood that we have a unique and special connection that a lot of people would define as love, pure and simple."

Love, for his fiercest rival. Think of that.

And it’s not just on matters tennis that McEnroe ruminates. He has a deep and long-time passion for art, and tells us about some of his favourites. He says: “I admire (artists) for having the guts to put themselves and their work on the line, and (so) I’m interested in them as characters." He thinks often about the nature of friendship when you’re a celebrity. In 1992, torn up after his divorce from Tatum O’Neal, he meets the Pearl Jam singer Eddie Vedder for the first time, and ends up talking to him all night about what he is going through. He finds “something genuinely sympathetic" in Vedder, so theirs is “one of the best examples of pure and simple friendship I can remember".

He tells us about making breakfast each morning for his youngest daughter, Ava, who turns 18 this year: “I just wanted her to have a little company in those early weekday starts." His son Kevin was arrested in 2014 for buying cocaine. It turned out to be baking soda, but it was a traumatic time. “It’s been painful to watch him struggling," writes his father, “but I’m proud of how hard he’s worked to get his life back on track." But “things are tougher", he says, with his other son Sean. In 2007, Sean nearly drowned on a California beach. It all ended well, fortunately, and McEnroe “hoped (that day) might mark a turning point in my son’s life". That didn’t quite happen, and McEnroe remarks sadly: “The phrase ‘unconditional love’ is easily written down, but it’s not an easy idea to put into practice."

Which parent would not relate to this?

There’s plenty more in But Seriously: funny, sad, inane, meaningful. The way McEnroe examines himself and his motivations makes you rue the lost opportunity of a certain Playing It My Way—several hundred dreary pages of platitudes and statistics that tell us nothing about the man Sachin Tendulkar.

This book doesn’t quite reach the bar McEnroe set with You Cannot Be Serious, and I wonder if that’s partly because McEnroe seems to have written this one entirely on his own, unlike that 2003 effort. But it is one for the heart nevertheless. It reminds me all over again why I dedicated my own book on Tendulkar to “you who liked me because I liked McEnroe".

It leaves me with a greater appreciation than ever for this endlessly fascinating man who happens to play gorgeous tennis.