A decade ago, Abu Dhabi, the tiny, seaside capital of the United Arab Emirates, announced its partnership with the Louvre Museum in Paris. The announcement of the Louvre Abu Dhabi, dubbed “a universal museum in the Arab World", was met with raised eyebrows—various news reports pegged the total fees paid to the Louvre in Paris at about $1 billion (Rs6,545 crore now; representatives for the Louvre Abu Dhabi declined to comment on any dollar figures).

And then...there was nothing. The museum was scheduled to open in 2012, with a massive, 260,000 sq. ft compound designed by the French architect Jean Nouvel, but construction deadlines were pushed back until it was announced that it would absolutely, definitely, 100%, be open in mid-November 2017.

While the art world waited, representatives of the Louvre Abu Dhabi were busy.

The organization, which is funded by the Abu Dhabi department of cultural and tourism and headed by Mohamed Khalifa Al Mubarak, the chairman of the Abu Dhabi Tourism and Culture Authority, amassed a collection of more than 600 artworks for its permanent collection, and in the process became one of the most aggressive buyers on the global art market circuit in the last decade.

Because the permanent collection (300 works of which have been on view from 11 November, along with more than 300 works on loan from French museums) has the open-ended mission to display “works of historical, cultural, and sociological significance from different time and civilizations", museum representatives were free to buy virtually anything that caught their eye.

The result is, on one level, a hodgepodge of expensive objets d’art and paintings spread across 23 permanent galleries in the museum’s complex. On another level, it’s a remarkable cross-section of the secondary art market over the last decade. 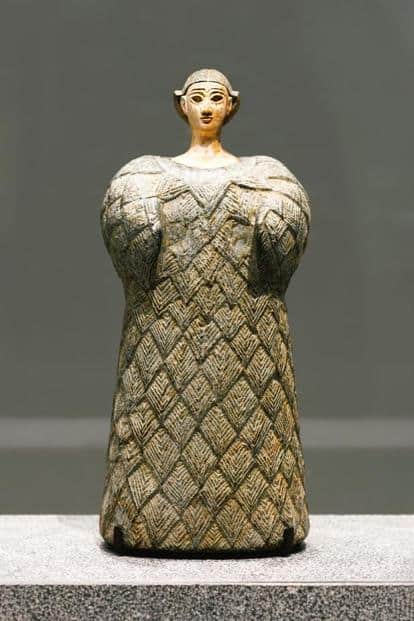 Some of the works have already been on view. By 2014, the Louvre Abu Dhabi had amassed enough to be able to put on a preview show of sorts at the Louvre in Paris, called Birth Of A Museum. Other objects, are now being seen for the first time.

Many of the modern works in the permanent collection seem to have been acquired during 2008 and 2009, when the market, rocked by the global recession, was a profound buyer’s market.

There’s a 3.75ft-high work by the Dutch painter Piet Mondrian, Composition With Blue, Red, Yellow, And Black, which the lot notes indicate was acquired in 2009 (six years later, another, smaller Mondrian from the same period sold for $50.6 million at Christie’s New York.)

Similarly, a painting by the Impressionist Gustave Caillebotte, Game Of Bezique, which was painted in 1880, was also purchased by the museum in 2009, as was Éduoard Manet’s The Gypsy, painted between 1862 and 1867. A year later, the museum scored a coup by acquiring a work by Paul Gauguin’s Children Wrestling from 1888 (also known as Breton Boys Wrestling). In 2012, another Gauguin painting of a Breton subject, Petit Breton A L’Oie, painted in 1889, sold for $10 million at Sotheby’s New York.

Over the years, as its collecting intensified, the museum branched out, with occasionally mixed results.

Its 1928 painting by the surrealist painter René Magritte, The Subjugated Reader, isn’t a prime representation of Magritte’s style (a work of roughly the same size by the artist, which he painted in the same year, sold for $7.2 million at Christie’s London in 2012), nor is a blue and white series of nine, eight-and-a-half-foot-high panels by Cy Twombly, which the artist painted three years before his death in 2008 (currently, the market seems to value scale in Twombly’s work rather than chronology: At Christie’s New York, one painting by Twombly, painted in 1957, is estimated to sell for $20 million; another one, which is more than twice its size but painted in 2005, has a $40 million estimate).

The true treasures of the Louvre Abu Dhabi seem to be its older works, which the museum has continued (and will continue) to acquire. There’s a stunning head of the Buddha from northern China, carved out of white marble in the mid sixth century, and an equally magnificent gold bracelet adorned with lions’ heads, made in Iranian Azerbaijan in the eighth-seventh century BC.

And if it’s unclear how a gorgeous red Chinese-lacquer French commode from 1,753 might highlight the museum’s stated aim to “highlight universal themes and common influences", or if the connection between Giovanni Bellini’s Mother And Child (1480-85) and an Egyptian sarcophagus from the 10 century BC is tenuous, not to fear: There’s been a strong curatorial attempt to weave all of these disparate objects together.

The galleries have been arranged both chronologically and thematically, so in the museum’s “Great Vestibule", for instance, visitors are introduced to maternity and funerary rituals, while a room dedicated to “universal religions" includes a Gothic bible, a leaf from the magnificent ninth century Blue Qur’an, and a Torah.

The building, a gleaming white collection of 55 individual buildings underneath a massive, 590ft-wide dome, is intended to be a destination in itself. Set on the long-stalled development project known as Saadiyat Island, the “museum city" that comprises the Louvre Abu Dhabi overlooks the water and includes museum galleries, temporary exhibition spaces, a two-storey children’s museum, a restaurant, cinema, and café.

The temporary exhibitions, with loans from the Louvre and elsewhere, will be changed four times a year. The inaugural show, which includes masterpieces by Manet, Claude Monet, Henri Matisse and Leonardo da Vinci, focuses on the creation of the Louvre during the 18th century.

As a final flourish, the Louvre Abu Dhabi has commissioned several permanent outdoor works by art market stars of today. The Arte Povera artist Giuseppe Penone, who is co-represented by the two powerhouse galleries Gagosian and Marian Goodman, has made an installation which includes a “vast bronze tree", and the artist Jenny Holzer, who’s represented by the New York gallery Cheim & Read, has made three engraved stone walls, into which various historical texts are carved.

All of this—the billions of dollars, the colossal building effort, and massive acquisition programme—are part of what could be considered a 25-year-long attempt by cities around the globe to recreate the “Bilbao Effect". It’s a term that was used to describe the restorative impact brought about by Frank Gehry’s famous Guggenheim Museum in Bilbao, and it’s a premise (and promise) that has since proved seductive to governments large and small.

Whether it will have a similar impact remains to be seen but for now, all we know is that the world has been gifted with a new museum. That alone is cause for celebration. Bloomberg