What the bow tie brings to men’s style

Absolutists and dabblers; eight bow-tie wearers tell us about the big effect the little knot has on them

Bow ties are knotty little things. They either elicit a strict no-no or become the absolute darlings of a gentleman’s wardrobe. There are but a few fence-sitters (whom we managed to find). What they all agree on, however, is shunning the pre-tied variety. Here’s what the absolutists and the dabblers had to say: I love dressing up, I love colour and flamboyance. Growing up in the late 1970s and early 1980s, I was exposed to the Bollywood swag of big collars and bow ties. When I went to grad school at the Massachusetts Institute of Technology, kids were in hoodies and T-shirts and I was in a crushed gold shirt with a bow tie. I have acrylic, handmade, 3D-printed, Nigerian wax-printed, woollen, Ikat—all kinds of bow ties. I think it’s important for us to realize that historically, flamboyant dressing was part of our culture; look at all the turbans, scarves, gamchas in stunning, bright colours. I urge all Indian men to reclaim our innate “fabulosity".

A selection of bow ties from Aneesh Bhasin’s wardrobe.

Men’s fashion is so limited, especially in terms of accessories. What all can we play with? Socks, pocket squares, belts perhaps? In such a scenario, I think a bow tie is one of those things that’s so wonderfully old school yet super cool. I’m the kind of person who will wear a double-breasted jacket but also might skip wearing socks.

A selection of bow ties from Amit Kekre’s wardrobe

I find we’re often on the cusp of dressing formal and casual. I team bow ties up with purely casual clothing like shorts. I’ve clipped a bow tie to my lapel, on a hat or a trouser pocket. It’s that little dose of something that has immense power to spruce up an otherwise indistinct attire. In 2014, I began to craft my own bow ties and launched Totally Ripe. I thought, let me take this largely formal symbol and make it fun (Kekre works on a one-on-one basis with clients via Totally Ripe, and stocks at Second Floor Studio, Delhi). One of my favourites is a peacock-blue bow tie (above right) that I repurposed from the Khand material that the Maharashtrian Koli women use to make their blouses. I love the tiny, triangular, psychedelic pattern

I am an old-fashioned guy. My wife believes I live my life as if it were a page out of an old 1920s’ black and white movie. Things were elegant. Courtesy and respect were in vogue. Bow ties, to me, are emblematic of that era. The French developed bow ties in the 18th century after getting inspired by the Croats using their scarves as neckties for shirts. When I head into work, I wear such old-fashioned Charvets. Do you see a player stepping on to the courts of Wimbledon not wearing white? Shouldn’t we bring similar respect to our workplaces? Bow ties make me feel like I’m stepping into the court of life, and let’s see what we’ll accomplish today.

ALSO READ: A defence of the everyday bow tie 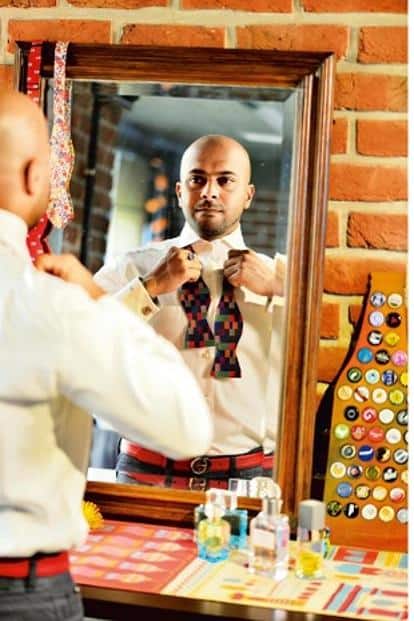 I much prefer bow ties to regular neckties. I have even worn them with jeans, shirt and jacket combinations. I wouldn’t wear them if I am doing a three-piece suit as a necktie fills in better. But at a black-tie event, nothing but a bow will suffice. Absolutist or not, I am definitely a purist. I would never wear a ready-made bow tie. A bow tie deserves to be tied, it’s all in how you get the knot right. If anybody wears those, they deserve my contempt.

A bow tie is the leveller that pulls all your other stories together—the pink shirt, the tan shoes. It is a means of communicating your personality and your mood on a particular day. I think a bow tie differentiates me from my peers. In a world where anybody can buy anything, a bow tie shows that you know how to spend money well.

There’s a certain channelling of your eccentric, intellectual and sensitive sides when you don a bow tie. Or your inner Bond! The man in a bow tie is always a mystery, people will never know if you are conservative or liberal. He’s usually a gentleman though, and playful.Personally, I’m a flitter. I’m pretty much a long-tie wearer. I’ll wear an Hermés bow tie on a whim and then I become a different person.

I’ve always had a high degree of respect for the bow tie, which channels images of gallantry and charm. Though the hipster brigade has gladly appropriated it, I had worked it into my wardrobe from a fairly young age, given my interest in all things sartorially vintage. A bow tie for me would never be those pitiful pre-tied types. Always self-knotted, in conservative elegance: Think satin-silk for a black-tie evening (usually the classics from YSL, Lanvin or Charvet), and if allowing for a dash of flamboyance, a patterned pick, thoroughly considerate of the accompanying jacket, knotted into a Big Butterfly.

As told to Komal Sharma