We have more confidence in who we are: Rajesh Pratap Singh

Rajesh Pratap Singh’s store in Delhi’s Lodhi Colony, a quiet part of town, has a spacious square hall towards the rear. It is flooded in natural light thanks to a skylight that spans the ceiling—it’s a luxury one doesn’t come across too often. Singh sits across a white wall with a row of ominous portraits of people wearing gas masks. It’s appropriate—and unfortunate—as Delhi struggles to breathe through the smog that sets in at this time of the year.

“These were done last year. We made a series of films for awareness. It wasn’t a branding exercise. The models are people from my factory," says Singh. “We’re here a year later and nothing has changed," he adds.

In November, Singh took part in a show for GQ Fashion Nights 2017, a two-day annual event held in Mumbai that focuses on menswear. Apart from Singh, Raghavendra Rathore, Shantanu & Nikhil, Gaurav Gupta, Ujjwal Dubey, Dhruv Kapoor, Sahil Aneja and Arjun Khanna showed their bespoke collections. Singh continued with his theme of indigo. “A love affair," in his own words. In previous collections, he has explored indigo-dyed Khadi, denims, Ikat and wool.

A 1994 graduate of the National Institute of Fashion Technology, he trained under designer David Abraham (of Abraham & Thakore) in his early days, and did a stint in Tuscany with Italian menswear label Marzotto before launching his eponymous label in 1996. Over the years, Singh has portrayed a tenacious appetite for handloom. His work, however, is a striking example of how to move away from the ethnic stereotype. He combines a spartan, rugged aesthetic found among people in mountain or desert landscapes with a modern, urban functionality.

Biker jackets combined with sari drapes, angarakha blouses with dhoti pants, geometric patterned suits, pants, skirts wrapped within voluminous shawls, Singh creates silhouettes that are part drape and part construction. His contribution to the development of textile crafts is evident in his collaboration with Bhuttico, a weavers’ cooperative in Kullu, Himachal Pradesh. He was one of the first designers to set up shop in Jodhpur’s old quarters, as part of an ongoing urban regeneration project to revive the historic city.

But though he has proved himself as one of the sophisticated designers in the Indian fashion industry, he speaks from a place of humility. “I know very little and I approach things like a student," he says. When Lounge caught up with the designer after the GQ Nights 2017 event, he spoke about his current projects, the changing landscape of fashion, and his new experiments with textiles. Edited excerpts from the interview:

Tell us about the collection you showed at GQ Nights 2017.

This was the third time I’ve participated. It’s to promote menswear in India. What I did was in continuation of what I’ve been doing with indigo, handloom, Khadi. We did a mix of asymmetric drapes and constructed garments. 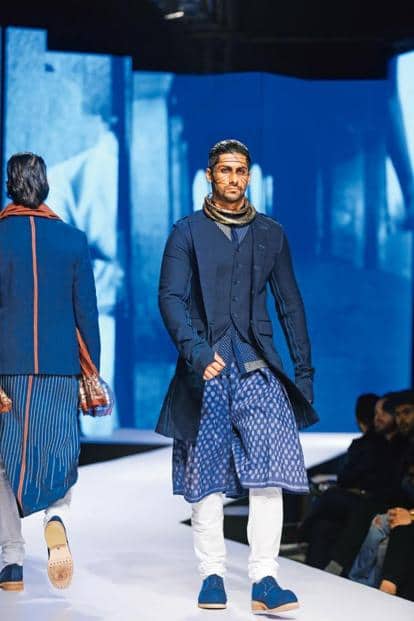 You’ve been the Woolmark Company’s ambassador for India since 2013. Tell us about that collaboration and your work with Bhuttico.

I keep working with Bhuttico on and off. It’s a fantastic place in Kullu with a cooperative of handloom weavers that was set up pre-independence. The association with Woolmark came a long time ago, unofficially, when Praveen Patel, who was at the time heading research and development for Woolmark, got in touch with me. We would go around the country to small villages exploring yarns and weaves, like mixing wool and pashmina up in Ladakh. It was very exciting. Eventually, there was some structural change and they asked me to become the ambassador for Woolmark for India.

What are the projects you are working on?

In one ongoing project, we’re experimenting with Indian cashmere. In another project, we’re working with indigenous silks from the North-East and seeing how to make them more supple. We really want to get into the molecular level, the fibre stage. The approach we’re taking is to introduce technology at a very basic level, and then return to handlooms. The idea is to create something which is the best of both worlds.

Is that where your heart lies? Taking something artisanal and developing it further?

Yes. I find fashion to be a very limiting word. I think what I really do is research and development. The idea is to explore the handmade as well as high tech.

You’re almost completing 20 years. How has the industry changed, how have you changed?

I’m still as slow as when I started. I like to take my time with things. As for changes in the industry, they always come in waves. Around the end of the 1990s, beginning 2000s, there was so much enthusiasm and positivity. We were on the threshold of starting something new. The first fashion week started around then (the first India Fashion Week organized by the Fashion Design Council of India was held in 2000), and there was only one in the country. Since then, things have changed tremendously. There are too many things going on simultaneously. There’s a lot of good, young talent that respects tradition, but not in an ethnic way. We’re at a time when we have more confidence in who we are.

However, there’s an alternative bipolarity. When you see, for instance, women in gowns at Indian weddings, you wonder what’s going on. I think right now is a moment of chaos that will soon lead to some spectacular results. 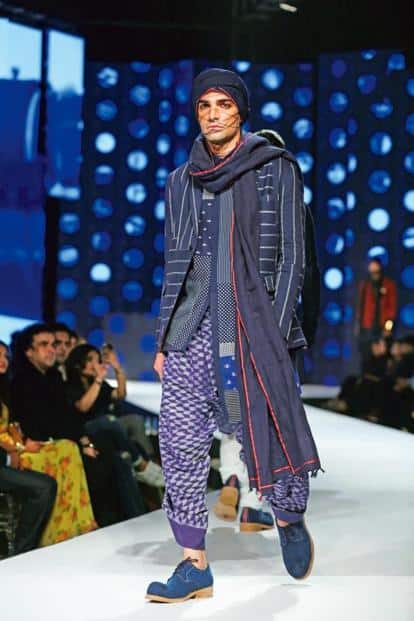 You like to work with your hands. I believe you dye your own indigo.

I know very little, so when I get into something, I like to really get into it. I approach things like a student. So if it’s indigo, for instance, I would want to know how it is dyed. Over a decade ago, I had met this old Japanese man who taught me a few things about dyeing. When I started out, for a short while I worked outside India. When I returned, I realized the kind of work I wanted to do, no mill at the time was ready to entertain us. So the only way to do it was to do it yourself. That still remains.