Walking the streets with M.F. Husain

While shooting Husain at the Nizamuddin Basti, photographer Parthiv Shah was struck by how easily the otherwise flamboyant artist would blend into this space

It was a breakfast invitation too tempting to refuse. Putting the phone down, Parthiv Shah, a young graduate from the National Institute of Design (NID), Ahmedabad, hopped on to his motorbike and sped to Delhi’s Taj Mahal Hotel. The year was 1994, and awaiting him was none other than the celebrated artist Maqbool Fida Husain. Shah, who was looking forward to a hearty breakfast at the five-star hotel, was a bit nonplussed when Husain suggested they go elsewhere. Well, if not the Taj, then surely Khan Market, thought Shah ruefully. 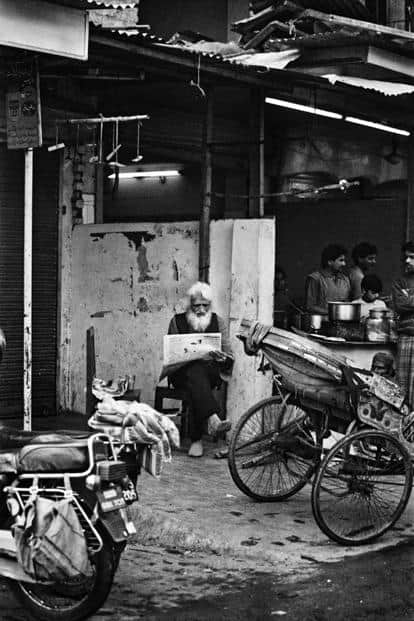 Husain completely at home in Nizamuddin Basti, engrossed in his newspaper.

But the painter had other ideas, and soon the duo was navigating the narrow, crammed alleys of Nizamuddin. Then, like a homing pigeon, Husain made for his favourite tea shop, where he ordered chai and some roti for the two of them. While Husain might have bruised Shah’s culinary hopes that day, he compensated by introducing him to a world not many were privileged to share.

Husain completely at home in Nizamuddin Basti, engrossed in his newspaper.

What struck Shah on this and subsequent visits was how perfectly at home the artist, who died six years ago, was in Nizamuddin Basti. There, away from the arc lights, he was no longer the world-renowned flamboyant artist, but just an ordinary visitor. This very ordinariness is what Shah captures with his lens in a series of black and white photographs on display at the Kiran Nadar Museum in Saket. Part of the exhibition Stretched Terrains, a string of seven exhibitions curated by Roobina Karode, Shah’s section is titled Sadak.Sarai.Sheher.Basti: The Recurring Figure.

Karode, who helped edit Shah’s collection of photographs for the show, has created a narrow passageway in the museum to mimic a gali (by-lane) in the basti (slum). This intervention also affords a sense of intimacy as the viewer comes close to the photographs, observing details that might have otherwise gone unnoticed. Like the fact that Husain is wearing no shoes as he walks through the basti, bringing to mind his moniker “barefoot artist". It is to Shah’s credit that he captures these moments in which Husain blends into his surroundings with consummate ease, even though there is much in his persona that sets him apart. The artist kneeling before his painting of Mother Teresa, whom he held in high regard, 1993.

Then there is Shah’s impeccable sense of timing, as evidenced in the shot where he frames Husain within an arched doorway just as he is turning back to see if his young companion is still following. This sense of familiarity between the photographer and his subject can also be detected in the photograph that frames Husain sitting with his old friend and fellow artist Ram Kumar in the Humayun’s Tomb complex. Both men seem barely aware of the camera as they trade news and anecdotes.

In contrast to these intimate observations, there is a set of staged photographs taken during Husain’s solo show at the National Gallery of Modern Art, titled Let History Cut Across Me Without Me in 1993. Husain was insistent that Shah document the exhibition, passing over a senior photographer who was originally meant to cover it. Shot over a couple of days, the photographs are a three-way performance between artist, artwork and photographer. Despite the difference in age—Shah was a friend of Husain’s son Shamshad—Husain was more than open to suggestions about choreographing the shoot. For instance, there is a painting of a scene from the Mahabharat depicting Bhishma lying spreadeagled on the ground. Without batting an eyelid, Husain agreed to Shah’s suggestion that he do the same, since the photographer saw the physical similarities between the two men.

In conversation with his old friend, painter Ram Kumar, in the Humayun’s Tomb complex.

A recurring motif in Husain’s paintings is the umbrella, and Shah ingeniously used his lighting umbrella as a prop, ensuring its presence both within and outside the canvas’ frame. Husain’s fascination with Mother Teresa, whom he immortalized in several of his works, is also foregrounded in the show. The artist created an altar in the saint’s honour and one of Shah’s photographs depicts him kneeling in front of her painting. 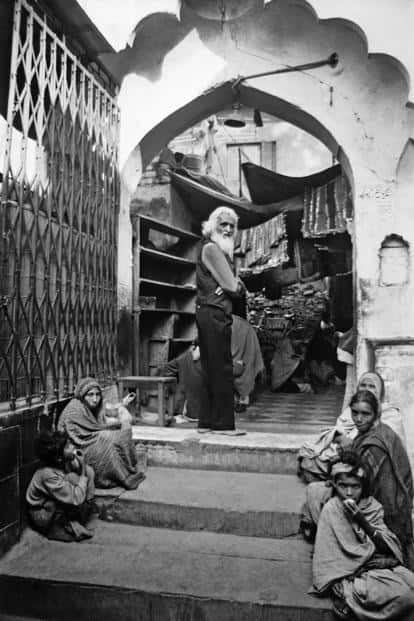 Husain turns to see if Parthiv Shah is still with him, on the way to the Nizamuddin ‘dargah’.

Shah also devotes a series of photographs to Husain interacting with the chairs that he designed especially for the show. For the photographer, they were symbolic of the machinations of power, which Husain witnessed first-hand as a member of the Rajya Sabha. But more than these it is the image of Husain seated on a very different chair that lingers. Tucked away in a corner in one of the busy by-lanes of Nizamuddin, he sits perusing a newspaper, perfectly at home with himself and the world.

Sadak.Sarai.Sheher.Basti: The Recurring Figure is on show as part of Stretched Terrains: A String Of Exhibitions till 31 August, 10.30am-6.30pm, at Kiran Nadar Museum of Art, 145, DLF South Court Mall, Saket, New Delhi. For details, visit Knma.in.