With 'Bhavesh Joshi Superhero' and 'Sacred Games', the director is diving into genre cinema

Vikramaditya Motwane, director of modestly budgeted indies like Udaan and Trapped, is now going full tilt at genre. His current projects include the vigilante drama Bhavesh Joshi Superhero, starring Harshvardhan Kapoor, the Netflix series Sacred Games (he’s the showrunner), and, still at the scripting stage, the superhero film Chakra, based on a character created by Stan Lee. We spoke to Motwane at the Phantom office in Lokhandwala, Mumbai, where he told us about the stop-and-start production of Bhavesh and the time he sped-read a thousand-page novel. Edited excerpts:

You told ‘Lounge’ last year that Hollywood would keep making inroads if we weren’t vigilant. With ‘Avengers: Infinity War’ earning Rs200 crore here, is it time to panic?

Yes, it is. If you have to compete with them, your studios, your directors have to start thinking big. Unless you make your films on the same scale, with the same ambition, no one’s going to come and see them. We’ve already started taking the first baby steps towards this. If you look at Dharma’s entire slate after this, whether it’s Brahmastra or Kalank, or YRF with Thugs Of Hindostan—they’re making films that deserve a big canvas.

When you think about a release date now, you actually have to consider an Avengers, a Deadpool, a Black Panther. Their average (earnings in India) is now Rs40-50 crore. No big Indian film was going to open on 27 April (the day of Infinity War’s release), though it’s a huge date—that’s when Baahubali opened.

Is there a danger in trying to match Hollywood at their game, given that you can’t approach those budgets?

I don’t think it’s so much about budgets as imagination. With Baahubali, (S.S.) Rajamouli took the audience into this world and showed them a spectacle, but it was also a human story. There’ll be lots of false attempts at large-screen spectacles which have no soul. Eventually, they’ll realize that you also need good writing, great characters.

Indie directors are increasingly being tapped for big studio projects in Hollywood. Do you see that happening here as well?

I think it will. I want to have the freedom to be able to tell the stories I want. That means sometimes having to tell larger stories with large budgets to be able to also tell smaller stories. I have the luxury at this point of being able to make something like Trapped, but I can only do that because I’m making a Bhavesh.

You’d come up with the idea for ‘Bhavesh’ after ‘Udaan’.

I started writing in 2010. I wanted to make it in 2011, as my next after Udaan. I was approaching a couple of actors, but then Ranveer (Singh) said I want to do Lootera, so I put this to the side. After that, I spoke to Imran (Khan), but when things were literally about to start, one of his films came out that really didn’t perform, so I had to sadly call it off. Then I approached Sidharth (Malhotra), and that was going fine, but then the government changed and the narrative of the country changed from corruption to acche din.

I had to adapt a lot of it to Harsh’s personality. He’s not the most angry, vociferous person, so I had to change it. But, at the same time, he has that quality of a lost kid who wants to do the right thing but doesn’t know how, who is waiting for a wake-up call. And that’s exactly what the film is about. 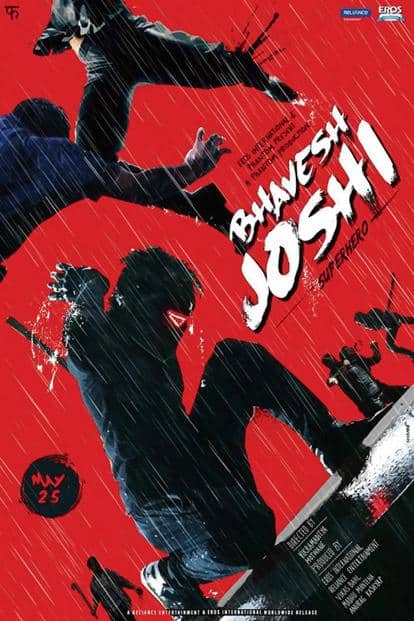 What was the inspiration for ‘Bhavesh’?

It partly comes from having lived in Mumbai and seen the city change, so much of it for the worse, and sometimes wishing you could wear a mask, take a rod and go out and change things. That merged with my love for the Angry Young Man films and 1980s Sunny Deol films and my love of Batman.

Originally, it was a much angrier, personal, visceral film; now it’s broadened up. It starts off in 2011, with two friends who are so inspired by the anti-corruption movement that they decide to do their own version of it.

I wish I could have done it when I thought of it first. There’s such a glut of superhero and vigilante films now. But I don’t know if it would have been as visible then.

What sort of visual aesthetic were you looking for?

The film has three distinct looks. There’s the 2011 look, which has the friends and the “Insaaf Show". We wanted to keep this as loose as possible, so we’ve used only 16mm or 25mm, very wide lenses, so the world around them is very much visible, it’s more open, not claustrophobic. For the 2017 portions, we changed the camera, the lens approach, went into a more realistic, slightly darker space. And then, when he becomes the vigilante, we’ve gone more graphic novel-y.

Did Netflix approach you initially for ‘Sacred Games’?

It happened through CAA (talent firm Creative Artists Agency LLC). Netflix was very keen to do their first show in India. I was actually in Los Angeles on holiday. I got a call saying, “Have you read Sacred Games? Why don’t you meet these guys next week?" It’s a thousand-page book! I had to speed-read 130 pages a day.

How different was a season of TV writing compared to film writing?

What was your first experience as a showrunner like?

When I was told you’re the showrunner, I asked, what’s that? I was googling it. The executive producer from Netflix put it very well; he said, you’re the constant creative voice on the show. You have the global perspective—you know what the music is going to be like, what the casting should look like, what the locations are like. You know the tone you want to set, whether you direct it yourself or not. You’re part producer, part director, part writer, part everything.

The vigilante in Hindi cinema

For much of Zanjeer’s running time, Amitabh Bachchan’s Vijay is an upright police officer—too upright. He’s framed and sent to jail; when he comes out, he becomes a vigilante of sorts, going after the crime boss who killed his parents, without involving the authorities. This is foreshadowed by a famous scene earlier in the film—central in the creation of the “angry young man" legend—in which Vijay wears civilian clothes instead of his uniform before taking on Sher Khan (Pran).

In Shekhar Kapur’s Mr. India, Anil Kapoor plays Arun Verma, whose watch gives him powers of invisibility, and who uses this to punish corrupt traders and officials and, eventually, defeat crime-lord Mogambo. It was a departure from 1970s vigilante cinema: tackling realistic problems with fantasy and larger-than-life heroism.

Aditya Bhattacharya’s pitch-black noir introduced a different kind of Hindi film vigilante anti-hero—let down, like his predecessors, by the system, but less righteous about the path of violent revenge he takes up. Aaamir Hussein (Aamir Khan)—helped by an embittered cop (Pankaj Kapur)—sets out to kill the men who raped his friend. The film refuses to allow its avenging protagonist the moral high ground.

Rape-revenge dramas had become common in Hindi commercial cinema in the 1980s, and the figure of the mythic dacoit went back even further. But, with Bandit Queen, Shekhar Kapur made something new: a melding of vigilante drama and art film; gruelling, realistic, poetic.

Recent events, especially the 2012 gang rape in Delhi, have resulted in an increase in vigilante violence by female film characters. In Mom, Sridevi plays a schoolteacher who becomes a cold-blooded killer after her daughter is raped. The film endorses her vengeance, with a police officer abetting her in the final murder.

Bhavesh Joshi Superhero will be in theatres on 1 June. Sacred Games releases on Netflix on 6 July.