Things are often not what they look like. The thick and creamy tomato soup, for example, is called minestrone, traditionally a thick Italian soup containing vegetables and pasta. Sure, you discover the finely chopped vegetables—zucchini, button mushrooms, carrots, snow peas—as well as barley in subsequent spoonfuls, but the surprising element is the fresh citrus hit that comes from a combination of kaffir lime leaves and lemon grass. It reins in the creaminess of the coconut milk, balances the heat from the sriracha, makes you crave for more, and sets the tone for the rest of the meal.

Innovation is the soul of Kiara Soul Kitchen, a new vegetarian fine-dining restaurant in Delhi that serves modern Asian food. The Maharashtrian chef Siddharth Chogle is trained in continental cooking, the ingredients are mostly Indian, flavours—and often the cooking technique—Asian, and influences global. The food, as a result, is an interesting mix.

Take, for example, the Bao Bhaji, which is a reinterpretation of the iconic pav bhaji. The bhaji, devoid of potato, is a salsa-meets-stir-fry amalgamation of vegetables with a hint of citrus, inspired by Thai cuisine, running through the dish. It is garnished with a dollop of butter and dust of dehydrated coriander leaves and served with three kinds of breads—a steamed bao, a baked bread and a lavaash.

“We wanted to be innovative with the menu," says Manav Windlass, 33, an engineer by training, who started the restaurant with younger brother Madhav, 28, both vegetarians themselves. “Vegetarian fine-dining space has a huge vacuum. And despite having a large population of vegetarians, Indians can’t think beyond paneer tikka and rajma chawal. Or Haldiram’s and Bikanervala, when it comes to vegetarian food in India. That was the gap we wanted to plug."

The brothers, who left their corporate jobs to open Kiara in March, say they were always interested in eating and wanted to do something of their own in the food space. The idea is to celebrate plant-based food, make it wholesome and healthy, “just like cooked at home". So the menu has been curated after consultation with a nutritionist and has options like gluten-free, vegan, low-carb, low-salt and low on cruciferous vegetables for diners with food allergies and other health issues. 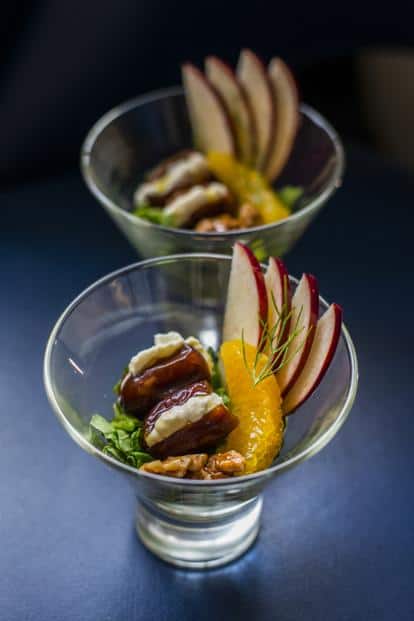 With Kiara, the Windlass brothers have finally ticked off the first box on their to-do list. “This space is more like an incubation centre, a proof of concept for us," says Manav. “The next aim is to scale up when the restaurant breaks even on operational level (which they say might happen by the end of the year) to a more premium space where we can do about 100-150 covers." Kiara does 48 covers currently. Perhaps their biggest success yet is to make even the hardcore meat-eating diners appreciate the flavours and the “other" kind of food.