Seventeen years after winning the National Award for costume design for Devdas (2002, along with Neeta Lulla and Reza Shariffi), Abu Jani and Sandeep Khosla, couturiers to the stars, were persuaded to return to costume designing for Veere Di Wedding. The movie, which released on Friday, revolves around four women—played by Sonam K. Ahuja, Kareena Kapoor Khan, Swara Bhasker and Shikha Talsania—and their attitudes to life, relationships and marriage.

Producer Rhea Kapoor, who owns the clothing line Rheson with sister Sonam, brought Abu-Sandeep on board to visualize the bridal looks for the big fat Punjabi wedding scenes. Along with a team of stylists, she took on the costumes for the rest of the film and the supporting cast.

The very day the sangeet song Bhangra Ta Sajda released, Abu-Sandeep’s store in Delhi received multiple queries for the outfits worn by Sonam and Kareena. If there was any question about the symbiotic relationship between film and fashion, Khosla puts it in perspective. “Fashion has been influencing film and vice versa for a long time," says Khosla. “Earlier, films popularized fashion, whether it was haircuts, make-up or clothes, from Sadhana to Saira Banu to Sharmila Tagore. Up until the 1970s, film used to influence fashion, as there weren’t any fashion designers then as such. However, today, people take cues from what designers give film stars to wear."

For Rhea, working with experienced designers Abu-Sandeep gave her the freedom to focus on the Western outfits and looks for the non-wedding parts of the film. “I wanted the clothes to depict a modern Indian woman. I didn’t want the bridal looks to be vanilla either, but unique and beautiful. Abu-Sandeep have such a deep knowledge of textiles, history, art, fashion and film," she says.

The couturiers delved into their archives and pulled out some choice pieces. “Sonam’s blouse in Bhangra Ta Sajda is inspired by miniature paintings, as seen around the neck. Kareena’s outfit is also rather unusual, with colourful embroidery on a black base," says Khosla, describing select costumes. For Bhasker’s character, the designers opted for extended slits, and for Talsania, the mood was sexy but not provocative.

Rhea is sure that Veere will set the trend for the festive season. “We have gone against tradition, and, when you do, people pay attention," she says. Khosla agrees. “For the general populace to break stereotypes, you need a film. It was very exciting for us because we could break barriers of convention in terms of what girls should wear at a wedding, because these four girls are wearing whatever they want. For example, we have done away with the three-piece convention and ditched the dupatta. Also, the colours are more experimental. Weddings today are becoming younger and more fun," says Khosla. 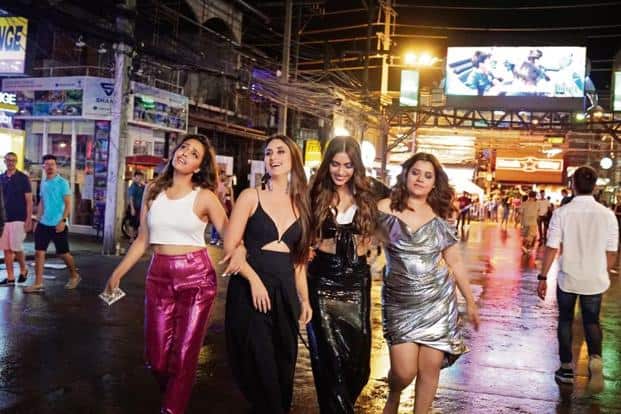 While Abu-Sandeep made selections from their archives and also created some original pieces, Rhea and her team went sourcing in stores from Mumbai and Delhi to New York, to put together wardrobes that reflected the moods and traits of the characters. Dhruv Kapoor, bhane. and Anamika Khanna are a few of the Indian labels which are spotted on the characters. “Kalindi (played by Kareena) has my dream wardrobe," says Rhea. “She can wear boots and sneakers with anything. Her hair is long, loose and easy."

The cues for the outfits came from the script, themes and colours, to what the characters are thinking. Khosla says: “Everything is designed according to the character. For example, Shikha is a bored wife, so her costumes reflect her desire to spice up her marriage, and are slightly sexier because of what she is projecting. We have probably been safest with Kareena. Sonam’s character, Avni, is one of high contrast—she goes from sati-savitri to rock rani, so we have gone from zero colour to full-on multi-colour. Swara’s Sakshi is the maverick, so her style is out-there, just as her character is confident and doesn’t give a damn." Summarizing the overall style, Khosla says, “The slits are high and the necklines are low."

Rhea says that a silver Vivienne Westwood dress, as seen on Shikha’s Meera, is one to watch. “It’s a tight fit and curvy girls might shy away from such a silhouette, but Shikha looks so sexy, because her character Meera is taking fashion risks. I think people will also love Sonam’s pink sangeet outfit, and Kareena’s outfit in the climax (designed by Abu-Sandeep) is dreamy."

The Hermes Kelly took on iconic status with Indian audiences after Zindagi Na Milegi Dobara (2011) dubbed it “Bagwati". Rhea says Veere has its own Bagwati—a highly sequinned moon-and-stars princess gown. She describes the kitschy, blingy, voluminous dress as a “modern girl’s nightmare", but Khosla believes it’s going to be the movie’s most popular costume. Just as the Mani Rabadi-designed white tunic suit with large pink flowers became a rage after Bhagyashree wore it in Maine Pyar Kiya (1989), Khosla predicts that bridal outfits for 2018-19 will take a leaf out of their lookbooks from Veere. Going against convention, they have done away with dupattas, introduced slits in the skirts, and showcased unusual colours like pastels and black. Besides the actual garments, jewellery, hairstyles and accessories have often found films to be a showcase with a wide reach.

“Prospective contemporary brides are making unconventional and individual choices. And here you have four bold, modern, fascinating and relatable girls. Fashion in film can translate from Kashmir to Kanyakumari, and that is what we think Veere Di Wedding will achieve. With couture, it can take two years before a style or design becomes a huge trend. But with film, it’s immediate," says Khosla.