Recently reissued, these food books provide a window into the culinarily rich states of West Bengal and Kerala

Food lovers should rejoice at the recent reissue of two books—Bengali Cooking: Seasons And Festivals by Chitrita Banerji (published by Aleph Book Co.) and The Suriani Kitchen: Recipes And Recollections From The Syrian Christians Of Kerala (published by Penguin Random House India). Whether it’s a recipe for an authentic machher jhol or fish moilee, or the representation of these dishes in art and popular culture, these books are redolent of the land and the people they belong to.

For someone who has grown up in West Bengal, it seems perfectly normal to be asked the question, “Have you eaten?", as a precursor to hello. And though this may seem rather odd to an outsider, it is a cultural marker of a people. It is nuances like this that make up Banerji’s Bengali Cooking, an excellent introduction to a state, its people, communities and kitchens. Banerji uses micro narratives—literature, climate and geography—to explain the mindboggling diversity in the state’s cuisine. First published in 1991 as Life And Food In Bengal, the book interweaves several genres—cookbook, history and memoir—offering insight into the food culture, ethnography and history of the state. Banerji touches on all the little and big things that contribute to its unique food culture. There is the legendary culinary rivalry between the Bangals (Bengalis who came from East Bengal, now Bangladesh) and the Ghotis (Bengalis from West Bengal) and the never-ending debates about whose hilsa is the best. She touches on the region’s love for all things related to fish; her book opens with the line, “If you ask any Bengali for the shortest description of Bengali food, the answer is likely to be fish and rice." An answer one can even derive from the Bengali babu’s weekend adventures in the fish market, or the numerous ways in which “rice-fish" is represented in rituals and literature. She delves into the sociology of food and its various manifestations across strata, from simple peasant fare to the lavish feasts in the aristocratic households of both Hindu Bengalis and Muslim nawabs who conquered and ruled the state. She talks about the gendered food culture, where men would receive choice cuts of fish and meat while their wives would cobble together meals from the leftovers. Widows would be at the bottom of the food chain, leading a life of deprivation, and the cuisine that they developed was truly one of ingenuity.

The recipes in this book are elucidated in a near-poetic manner, divided according to seasons, filled with history, personal anecdotes and asides on digestive health. One dish follows the other in lyrical continuity, just as in a multi-course Bengali meal. 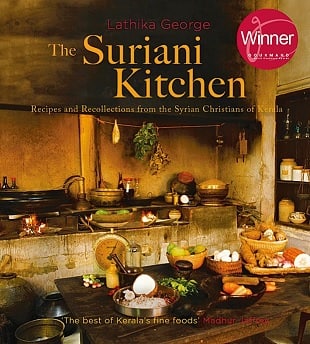 Lathika George’s The Suriani Kitchen which was first published in 2009, follows a similar trajectory, tracing cuisine through memories and the broader history of Kerala. The story of the Syrian Christians is a story of migration, faith and food. It is also the personal story of families and the meals that they had. She introduces the lay reader to the traditional kitchen with its various implements and methods of cooking, accoutrements and spices. The latter is examined through taxonomy, history and usage. There is a chapter dedicated to coconut and its various manifestations in the food of this state. There is the food of fasting and food of feasting and, just like Banerji, George’s recipes are personal, taken from her family’s large repository and preserved through successive generations of mothers and daughters. There are local legends—an especially saucy one tells the story of a man masquerading as a female chef called Missy, who cooked up quite a storm in traditional Syrian Christian households of the 1940s. There are stories where food, poetry, memories and grandmothers’ recipes all come together.

An intriguing aspect of these books is the way they mirror each other. Apart from a similar political past under the red flags of communism, the two states are twinned in their love of all things fish. Coconut is to Kerala what mustard is to Bengal and the banana plant is judiciously consumed from root to shoot. Both books open windows into a world where food is linked inextricably with a region, its history and cultural traditions. And whether you are a cook or not, The Suriani Kitchen and Bengali Cooking will take you on a visceral journey through spice-laden kitchens, verdant fields and rivers plentiful in fish.