Cookbooks with handpicked vegetarian dishes and tiffin recipes from around India. Plus, a compendium for those looking for more

A season for vegetables

At the Ardh Kumbh Mela in Allahabad in 2007, food historian and author of several food books Pushpesh Pant had, what he calls, a “mind-boggling" experience. He came across a Naga sadhu mixing a bunch of things in an earthen pot. Amused by Pant’s curiosity, the sadhu asked if he would like to have a taste. “I risked my life and said yes. It was amazing what he was doing: putting all kinds of leaves and seeds into a pot without any fat, salt or sugar. It looked like a gooey mess but you could taste in it all the six distinct flavours." Oil from the seeds had fused with myriad flavours from the leaves, and Pant was rewarded with a bite that was pungent, astringent, sour, sweet, salty and bitter all at once.

It spoke volumes for the strength of seasonal, local produce, which forms the core of Pant’s new book, The Indian Vegetarian Cookbook (Phaidon, 2018). The cover is a reminder of how colourful Indian food can be, greeting you with a thali strewn with chilli powder, turmeric, garlic, bay leaf, fennel seeds, pepper and a clutch of curry leaves, ingredients that are used to temper a great many dishes. There are 130 dishes from various regions in the country, like Sindhi curry, garbanzo bean curry from Mangaluru and chilgoze ki kheer from Awadh. There are little nuggets to nibble on, such as taro leaves in coconut milk from Assam, which Pant notes is unusual because of the inclusion of coconut milk instead of tamarind, introduced by immigrants working in the plantations.

What The Indian Vegetarian Cookbook does best is to champion India’s culinary pluralism and complexity, without feeling the need to mimic meat in order to be rich and celebratory. Inspired by his mother’s ingenious and inventive cooking, which typically involved taking a single item and mixing and matching techniques and ingredients, the book is generous to grossly undervalued produce like ridge gourd, pumpkin, bottle gourd and Indian squash. 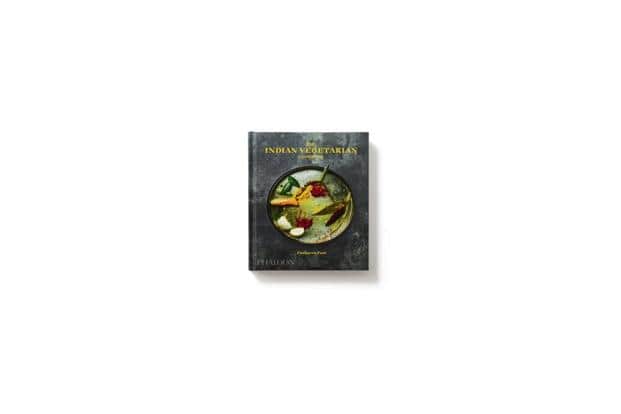 The time is just right for a regional vegetarian cookbook, says Pant. With more people worried about cholesterol levels and growing apprehension about processed and antibiotics-injected meat, there seems to be a growing trend favouring a vegetarian diet. The book allowed Pant to highlight the great diversity in vegetarian fare, even as he went back to his roots in the hills of Uttarakhand, and drew from his wide-ranging research over the last 20 years on subjects such as the politics of food, food security, and the synchronicity of foods across the country.

The book captures with photographs the “beautiful logic of seasonal vegetables: greens, reds, yellows, with which you could have a non-monotonous polychromatic diet". With the trend of growing your own greens in kitchen gardens or urban terraces and sourcing organic produce at local farmers’ markets, the call to hyper-local, home-grown produce finds a deep echo in Pant’s cookbook. As a food writer, Sonal Ved’s travel has always been planned around food. “From trekking in Kashmir in search of the gucchi mushroom, road tripping in Tamil Nadu to explore the various breakfast options, frequent visits around the Konkan coast or the wine region of Nashik in search of flavourful curries, eating in Buddhist monasteries in Ladakh are what my holidays looked like!" A comprehensive coffee-table book, Tiffin: 500 Authentic Recipes Celebrating India’s Regional Cuisine (Roli Books, 2018, ₹ 1,995), is more or less a coming together of all these experiences. It includes temple cuisine, street food, tribal recipes, and other dishes that you might not commonly come across. “If it’s cooked in an average home in a particular region, it had to be in my book," she says. “If you scroll through a lot of Indian cookbooks, you will notice how the dialogue usually tilts towards representation of popular Indian cuisines compartmentalized as northern or southern. That too fewer regions within these, like Punjab, Lucknow within Uttar Pradesh, a little bit of Kerala, something of Tamil Nadu and that’s it. But what about hyper-regional recipes? Like food from Bhatinda or curries from the Saraswat Goan community. What about cuisine from the deserts of Kutch, or the food of the Memon community in Mumbai or Gujarat?" For the book, Ved turned to contributors including grandmothers, mothers, aunts, friends, cookbook authors, and chefs who champion regional Indian cooking. Some crowd favourites came from wedding caterers, who gave her recipes for khichda, aate ka halwa, banjari gosht, Sindhi kadhi, kozhi porichathu (chicken fry) and mirchi ka salan, among others. The dishes are photographed in and around shiny tiffin carriers, evoking a time when they were permanent fixtures in most kitchens. The colourfully chic styling and photography by Anshika Varma, weaving in spices, accompaniments and kitchen props, makes the book visually layered and engaging, as do the cheerful illustrations by Abhilasha Dewan. While curating the book, Ved kept in mind the varied produce, techniques, and culinary styles across six regions: the north, south, west and east India, the North-East and central India. The fun, of course, is in cross-pairing the dishes to suit your style. So at tea time, a Benarasi tamatar chaat will go splendidly with a khasta kachori from Madhya Pradesh, with Indore-style fried garadu (cassava), bhutte ka kees and Kutchi kadak (toast) on the side. For Sunday brunch, recommends Ved, one could do Bhojpuri dum aloo, Bengali-style luchis, Rajasthani gatte ki kadhi, Assamese chicken-and-banana-flower stir-fry, and a south Indian payasam to finish.

In restaurants, takeaways, food festivals and cookbooks, regional cuisines are having a moment, andTiffin raises the bar to make the movement a tad more authentic.