Julia Donaldson is tired of rhymes that go on and on. This doesn’t seem the likeliest complaint from a writer known for books where a broomstick “flies through a cloud" and the resultant scream “is scary and loud" (Room On The Broom, 2001). Also, being partial to limericks, I am immediately worried. We are both at this year’s edition of the Tata Steel Kolkata Literary Meet where I, who have just written my first illustrated book, am picking the brain of the 69-year-old Donaldson—one of Britain’s highest-selling writers, a children’s book icon—who wraps her hands around a glass of gin and explains why rhymes need to have a purpose. Beyond merely rhyming, that is.

With the ease of a painter scribbling on a napkin, Donaldson spills forth impromptu verse: Julia was sitting on the table,/ Along with her friends Jesse and Mabel./ On the table were some crisps,/ Julia leant forward, her hair in wisps./ She put a crisp into her mouth,/ And looked around from north to south./ Oh I wonder what I’ll do tomorrow,/ she said. I’ll go to the library and borrow…"

This all sounds perfectly nice to me, especially in Donaldson’s welcoming sing-song voice, popular around the world as she (and her paediatrician husband Malcolm) dress up as mice and foxes to perform readings of books like The Gruffalo, which was first published in 1999 and has sold over 13 million copies worldwide. But she hates it. “It’s just waffling on, while actually the rhyme should be condensing it." Her point is an incredibly insightful one, where she uses the rhyme to edit the narrative—adding jump-cuts to take the action forward faster, in film parlance—which is why every single line packs a lot of action.

This attention to narrative economy makes sure that children get a lot of goings-on in each line and things remain eventful, and her books—which usually have very few lines—capture the imagination throughout. The Gruffalo, for instance, begins with the lines: A mouse took a stroll through the deep, dark wood./ A fox saw the mouse, and the mouse looked good. 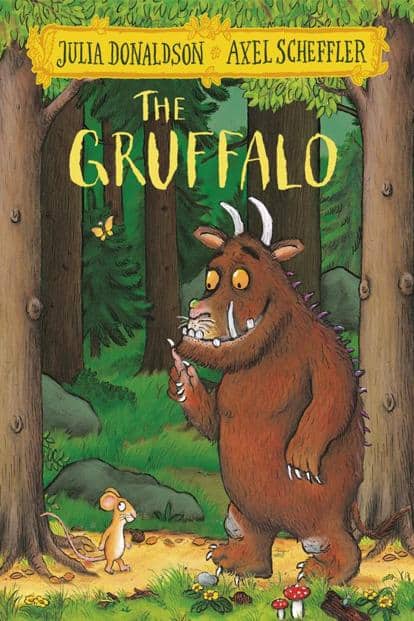 ‘The Gruffalo’ has been translated into over 40 languages.

“If that was in prose," Donaldson elaborates, “I’d have to say, ‘Once upon a time there was a mouse who went into the wood to look for hay. He hadn’t gotten very far when he heard a rustling in the bushes. ‘Oh no, I think it’s a fox,’ thought the mouse’, and that would go on. The rhyme has to condense the action."

These techniques were honed when Donaldson was writing educational books for children, long before The Gruffalo—technically her 17th book though she counts it as her first. “When writing educational books, there are these requirements, like you are allowed to have only this many different words," she says. “You are allowed a few hard words, but you must repeat them." Repetition is indeed key in books meant to be read out loud, where children befriend unfamiliar, fun-sounding words by saying and hearing them many times over. Like, say, “Gruffalo", coined by Donaldson to name her now-iconic beast when she realized “Tiger" didn’t rhyme as readily.

The Gruffalo was born out of a Chinese folk story about a quick-witted girl who escapes a tiger by telling him tall tales, and Donaldson, who stumbled upon it as part of her educational picture-book research, decided to save it for later, for a book without constraints. “When you’re commissioned to write, you’re often ticking someone else’s boxes, really. Also, you’re not allowed to mention pigs at all, in case you offend the Muslims, you’re not allowed to mention witches, I don’t know why, so as soon as I started writing trade books, I quickly got a lot of pigs and witches in there."

How long do her books take? Malcolm, a genial man with a grin too broad to hide behind his moustache, has the answer: “I say it takes weeks, months and years. It’s basically the idea of the plot, and then once Julia’s got the plot, it’s two weeks of really intense torture. Every day she comes out of her study saying, ‘I can’t do this.’ So, the actual writing takes two weeks."

Donaldson has worked with several different illustrators, and I’m curious about the way she establishes fresh rapport with her artists—only to find that there is no rapport. “We don’t really communicate with each other," she says. “I work with the editor, the illustrator works more with the designer." I’m surprised, given how closely I worked on each page of The Best Baker In The World with illustrator Vishal K. Bharadwaj. She tells me, in words a film critic should understand, that a screenwriter doesn’t work with a cinematographer to develop the look of a film. I insistently counter that the relationship is much more like that of a director and a cinematographer. She takes a swig and the subject is changed. 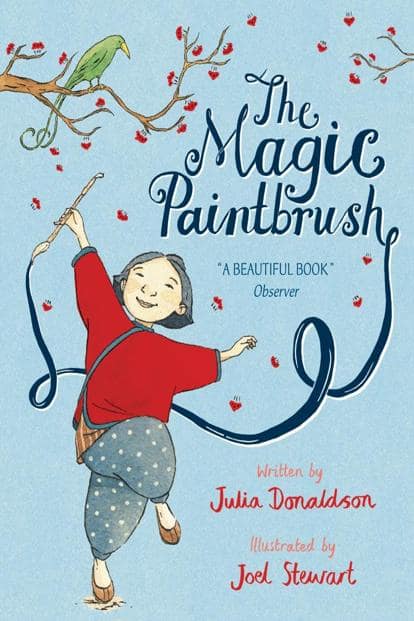 The cover of ‘The Magic Paintbrush’.

Finally, I tell her how thrilling it is when, as a writer, you plant a throwaway detail, a reference or an in-joke, and children find these Easter eggs, or when they have their own takeaways, which the writer might not anticipate. Donaldson agrees. Almost. “What I find is that people take little phrases from the books and they become family sayings," she says, matter-of-factly. “Like they take ‘truly magnificent’ from Room On The Broom and apply it to what they are describing, so that’s quite nice."

Ah, but that only happens if you’re writing classics read and adored by millions, I point out. Donaldson laughs, as if she hadn’t thought of that. It is a hearty laugh, a sonorous ha-HA-ha-HA. She even chuckles in rhyme.