This is my island in the Sun

An islander dwells on the many reasons that make islands special, drawing us back to them again and again

My desire was not to pass any island without taking possession, so that, one having been taken, the same may be said of all.

Before anything else, my family is defined by islands. As far back through the many centuries that we know our roots, they have been sunk deep in the blessed soil of Divar island, once known as “Kashi of the Konkan", which undulates verdant in the Mandovi river next to Old Goa. Endless generations were born to flourish there, until my grandfather, the late poet, translator and academic Armando Menezes, uprooted to study and teach in Bombay (which was itself founded on seven islands). I was born in view of the Arabian Sea at Malabar Hill, but my two elder sons emerged into the world in Manhattan. In 2007, bringing it all back home, their younger brother was born in Panaji, on the ancient island of Tiswadi, very close to where our story originally began.

Napoleon famously said, “Geography is destiny." He was referring to geopolitical strategy, but the maxim holds just as much for identity and belonging. In a snippet of autobiography that is included in The Cradle Of My Dreams: Selected Writings Of Armando Menezes, 1902-1983, my grandfather wrote about the riparian landscape of India’s smallest state being “a law of life for the Goan", then elaborated: “To have been born on an island is an ambivalent fate: the river that confines you also makes you dream beyond itself, draws you gently outward, towards some far incalculable sea. Every ferry is a challenge; every bend of the river an invitation…. These things are, often, not consciously held; they are in our blood, in our very chromosomes. The umbilical cord is never quite cut; the kite in the air is still held by the string below."

For my own life, those words have been imbued with prophetic inevitability as the allure of islands has persisted, immensely powerful. I am drawn to them irresistibly. While decades of incessant to-ing and fro-ing have otherwise rather comprehensively squashed the travel bug in me, an exception is always made for atolls, cays, archipelagos. I find immense comfort in crossing the water to leave the rest of the world behind. There’s really nothing quite like disembarking on a self-contained shore, and pulling up the metaphorical ladder. No man is an island, according to John Donne, so there is considerable irony in the fact that we seek out islands precisely to feel like original Man, at least symbolically marooned and left with limited options.

So many crucial moments in my life have occurred within the ambit of islands. A year after we met, the most serious girlfriend I ever had spent a month with me in a little apartment in sight of the shimmering translucent sea in Tobago. We spent liquid days cosying up in the Caribbean sun. She learnt to snorkel by my side, and I began to cook proper meals for the first time under her guidance.

Together, slowly, thousands of miles away from family and friends, we shed our masks and inhibitions, and all kinds of emotional baggage, and then began to communicate directly with each other. That is when we learnt who we could allow ourselves to be in each other’s company, and the architecture of a potential joint future began to take shape.

Twenty-five years later, the story of our partnership still bristles with talismanic island journeys, even as our travelling party has expanded to embrace three sons. When the oldest was tiny, we took a long trip to Caye Caulker off the coast of Belize, very close to the world’s second-longest barrier reef. Instead of booking a hotel, we settled into a tiny fisherman’s house, bright pink like the interior of a conch shell, and cocooned tropical style. We ate mangoes plucked over the garden fence, along with incredibly fresh fish we caught ourselves on hand lines. Every day, I rode a bicycle down sandy roads, luxuriating amidst bougainvillea, under a canopy of soaring palms. With days stripped bare of extraneous frippery, and our minds focused serenely without meaningless distractions, there came a life-changing bolt of island logic. Why are we doing this here in Central America, at great expense, instead of claiming my original birthright back on the Mandovi? Just like that, a ferry was set in motion in the direction of home.

Even after we headed to India to rekindle family bonds to our glorious green ancestral islands (it had been almost a century since my grandfather had migrated), there lingered considerable uncertainty about whether the “homelanding" would work. A considerable proportion of that anxiety and ambivalence dissipated during an intense, epiphanic stay on colossal Majuli in the Brahmaputra river in Assam—the world’s largest river island. Here, every moment played out a potent distillation of déjà vu as I was transported straight back to the most cherished days of childhood, with the nicest people you can ever meet (islanders really are the best), and endlessly languid days immersed in nature. I again realized what I wanted most for my children—the comfort of growing up immersed in a community; a profound environmental consciousness; and most of all, a recognizable childhood with time and space to grow into their individual selves.

That kind of experience of discovery is exactly what islands are made for. They function as crucibles. With no place to hide, you have to turn and reckon with your circumstances, your thoughts and desires, as well as whoever you are with. When my wife’s youngest sister, the baby of her family, decided to marry her Oxford University college mate from Venezuela, and visit his country for the first time, her father solemnly entrusted me with the job of checking him out on home turf. And so we disembarked on the creole, easy-going Isla de Margarita to meet his parents and grandmother, where we ate, drank and caroused constantly from morning till past midnight. As formalities and pretence fell away, true character was revealed. After repeatedly observing the young man dance merengue with his deeply flushed intended, it was clear another ferry had already been set in motion. My island telegram to the paterfamilias: Relax, he’s just like us, they belong together.

However far you delve into my family’s collective psyche, the idea of the island as launch pad will surface repeatedly. It is perhaps our most cherished concept. Armando Menezes wrote perceptively about this aspect in an essay titled Rivers: “If you happen to have been born within sight of a river—and how many of us have been!—or born and bred on an island, as I was, the river runs in your veins as if it were your very heart’s blood. Then it is not something you see and go on to drink in its beauty. It is something you have to cross, an element which protects as well as inhibits, a limitation but also a challenge…. It is a mistake to think that being born and bred on an island makes you insular. The very opposite is the truth. If it is true the river hems you in, it is equally true that it opens up horizons for your mind. Like all true things, it is a window beyond itself."

Thus, like the feathered nest itself, and starting right from beloved Divar, our water-ringed homes always nurtured and nourished, but also sparked notions of escape, flaring most dramatically because there is always promise of the infinite unknown just beyond the allegorical “bend in the river". From the perspective of an island shore, there is no limit to your aspirations. My grandfather wrote, “A mere rowboat, swaying gently in the lapping wash, appears to be a vehicle of infinite adventure; a tattered sail vanishing around a river bend becomes a carrier of your wildest dreams."

Recently, my wife and I faced an inescapable but not wholly unwelcome transition. After two decades of fiercely circling arms to shield, support and raise our boys, the time came to lower drawbridge and allow the oldest passage out to boarding school, and thereafter to college, with his brothers to follow in turn. This is not one but three ferries chugging away from safe haven, and our only choice is to adapt gracefully. In order to trigger that process, we retreated, probably instinctively, to yet another island, magical Minicoy, at the very far-flung southern end of Lakshadweep’s Union territory, where there’s effectively no internet or cellphone connectivity, and we spent all day and night as a family on the shore of its magnificent lagoon. This turned out to be what we needed most of all, an emotional and meaningfully cathartic time ensemble, as all those complicated feelings of loss metamorphosed to butterfly wings, then jubilation. 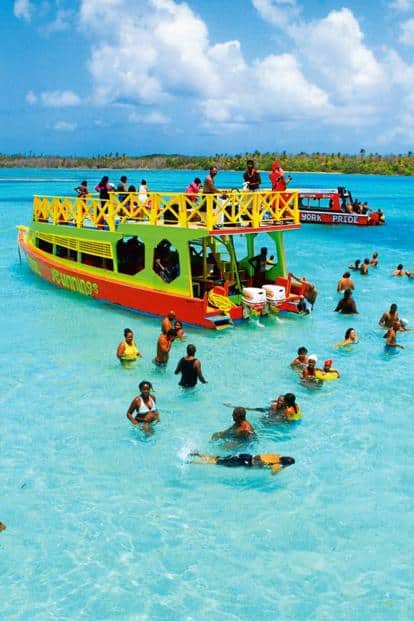 The natural Nylon Pool in Tobago is best toured in a glass-bottomed boat. Photo: Alamy

The best part about making an island home is coming back from wherever you have ventured. For reasons of practicality, my wife and I chose Panaji, at the tip of the triangular island of Tiswadi, which is linked to the mainland by bridges across the Mandovi and Zuari rivers. Every time we cross either of these, my soul somersaults with pure gladness and joy. If it is from the south, there is Vasco da Gama’s grand harbour sweeping to the left, where traders have sailed from around the world to do business for at least 2,000 years. From the opposite direction, there is the heart-warming sight of lovely, Latinate Panaji curving low-rise under the Altinho hill towards our apartment just off the sands of Miramar beach.

But either way, once the river is behind us, there is an all-encompassing comfort zone, where everything is comprehensible and everyone is a friend. That is the island blanket, an overarching sense of security and unbreakable connection, as aptly described by the lyrics of Harry Belafonte’s classic calypso—which I have sung on literally every ferry ride taken to Divar with my sons—“This is my island in the sun/Where my people have toiled since time begun/ I may sail on many a sea/ Her shores will always be home to me/ Oh, island in the sun/ Willed to me by my father’s hand/ All my days I will sing in praise/ Of your forests, waters, your shining sand."