The year the tigress died

Even as the number of tiger deaths in the wild declined in 2018, the killing of an alleged man-eater by a sharpshooter continues to raise questions about the state of wildlife conservation in India

In the beginning of December, two camera trap images of tigers wading through snow-filled landscapes began to do the rounds on social media. These were from a study conducted by scientists of Dehradun’s Wildlife Institute of India in Arunachal Pradesh’s Dibang Valley between 2015-2017. It was the first time researchers had published photographic evidence of a promising big cat population (at least 11 tigers were photographed) surviving at high altitudes (over 3,500m).

But that was one of the few bright spots in a year that brought to light the struggles India still faces in wildlife conservation, particularly in connection with the tiger. On social media, the year was seemingly dominated by one bit of bad news after another when it came to India’s wild denizens. And the tiger featured most prominently. Today, there are less than 3,500 tigers left in the wild globally. Around 70% of that population resides in India, including 80% of the Bengal subspecies.

Admittedly, there has been a steady increase in the tiger population over the last few years. India had 2,226 tigers as per the 2014 All India Tiger Estimation, a survey conducted by the National Tiger Conservation Authority (NTCA) every four years. That is a near 60% jump in population compared to 2006, and an increase of around 30% from 2010.

In 2016, the World Wildlife Fund (WWF) announced that the number of tigers in the wild was growing for the first time in a century. This increase was attributed to rising tiger populations in India, Russia, Nepal, and Bhutan; improved surveys; and enhanced protection. Indeed, the number of tiger deaths in India has been decreasing over the last few years, according to data compiled by HowIndiaLives, a database and search engine for public data. There were 122 tiger deaths in India in 2016. That number fell marginally to 115 the following year, and until 15 December, there have been 96 tiger deaths in 2018. While there has been criticism, Project Tiger has largely been successful in helping to curtail the decimation of the species’ population in the wild.

But the improvement in numbers must not mask the fact that all is not well in the world of the big cat, particularly since human population has grown exponentially as well during the same time. With India’s economy continuing to expand, the need for rapid development, an increasing wildlife population and fragmentation of forests have propelled the term “man-animal conflict" into the limelight in recent years. While the elephant has borne the biggest brunt, occasionally tigers get caught in the crosshairs too. And, perhaps no other animal has ever been as entangled as the tigress Avni.

The tiger that woke a nation

India has, undoubtedly, had to put down several man-eating tigers and other big cats over the years. While many of those operations went largely unnoticed by the public, in today’s era of social media, the way forest department officials deal with man-eaters is often in the spotlight.

Even if the chief wildlife warden of a reserve decides to capture rather than kill a man-eater, there are several challenges involved, say forest department officials. “Three-four years ago there was an old injured tiger that was pushed out (of the core area) in Bandipur. It got injured in a fight for territory with a younger tiger. The secretary and principal chief conservator of forests (PCCF) of wildlife had to camp there for a few days and then shoot it down. If it is a proven man-eater, it has to be put down. In that landscape, going and tranquillizing a tiger and especially a man-eater is very, very dangerous. You can’t even strike it with a dart if it is more than 20m away," said Punati Sridhar, current PCCF and head of the forest forces, Karnataka. 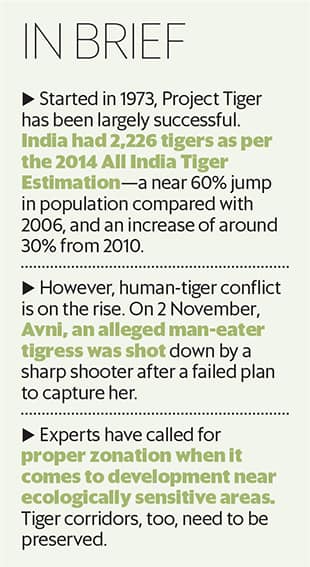 The debates around the way the Maharashtra forest department handled Avni’s case were a little different. Avni’s first tryst with humans began in mid-2016. Between May 2016 and August 2017, 13 people died due to tiger attacks in the Ralegaon tehsil, in and around Loni village in the Yavatmal district, Mint reported in November. Avni is suspected to have killed at least seven of those people, although the common belief in the area is that she killed all of them. She was declared a problem animal by the chief wildlife warden of the state. In August, after three people died, allegedly after being attacked by Avni, local protests forced the forest department to step up operations. An order was issued to kill the tigress, which was immediately challenged in the Bombay high court and later the Supreme Court. Both upheld the order to kill Avni. After a massive hunt by the state government—using everything from drones to para-gliders to capture the animal—came to naught, the tigress was shot down on 2 November by a sharp shooter.

Several questions were raised by the public about the way Avni was dealt with. Was the tigress really a man-eater or was she merely trying to protect her cubs? Could she have been tranquillized and captured? Was she being disposed of to clear an area of wildlife so a private company could set up a factory there? Why did the department have to involve Shafath Ali Khan and his son Asghar Ali, sharpshooters from Hyderabad? An investigation committee formed by the NTCA found that many rules and guidelines were violated in the killing of Avni, Hindustan Times reported earlier this month. The state government has been asked to respond to the findings of the committee.

There is no way we will secure our wildlife without addressing the issue of human-wildlife conflict. This is also linked to greater loss and degradation of habitats, so it needs to be seen cohesively- Sanjay Gubbi

Tigers have lost more than 93% of their historical range, according to WWF, due to habitat degradation. As forest covers across the globe continue to shrink, humans and tigers have been left to compete for space to survive. The fallout has been calamitous for all wildlife globally. WWF’s 2018 Living Planet Index shows an overall decline of 60% in the population of vertebrates between 1970 and 2014.

“There is no way we will secure our wildlife without addressing the issue of human-wildlife conflict. This is also linked to greater loss and degradation of habitats, so it needs to be seen cohesively," said Sanjay Gubbi, wildlife biologist and author of Second Nature: Saving Tiger Landscapes In The Twenty-First Century.

In 2011, the tiger estimation report warned of heightened man-tiger conflict since most of India’s reproducing tigers were concentrated in 10% of the available tiger habitats. Last month, Mint reported on a study commissioned by the Maharashtra forest department, which found only six forest patches in the entire eastern Maharashtra region that could be termed ideal habitats for tigers. Linear infrastructure development has emerged as the single-largest threat to the demographic viability of tigers, as per a study published in February by non-profit Wildlife Conservation Trust.

“This population increase cannot be sustained because tigers have juvenile dispersal, like other mammals. The juvenile male cubs disperse. Sometimes female cubs also do that to establish their territory. This dispersal takes them to places which could be far away. These connections (tiger corridors)—along with the juvenile dispersal—help in genetic exchange, maintaining good genetic diversity in the population and also decolonizing," says Prachi Thatte, a post doctorate fellow at the National Centre for Biological Sciences, Bengaluru.

Pranav Chanchani, coordinator, WWF-India’s Tiger Conservation Programme, says that expanding road networks and infrastructure projects in tiger habitats can adversely impact their population. “Other than the obvious hazards that roads pose (vehicle collisions with tigers and their prey), they have also been shown to increase ease of access for poachers into forests... Moreover, by fragmenting habitats and eroding corridors, infrastructure networks also increase genetic isolation," Chanchani says on email.

“Simply put, more tigers equals more opportunity for conflict with people. Add to that increasing human populations in India and it is no surprise that human-tiger conflict (HTC) will increase," says Goodrich, in an emailed response. “Hence, as India’s conservation efforts become ever more successful, there must be an increased focus on managing HTC (e.g. tiger-proof livestock enclosures and livelihoods programmes that reduce human and livestock dependency on forests where tigers occur), first with measures to prevent it from happening and second with measures to rapidly address conflict when it does happen (e.g. rapid response teams)," adds Goodrich.

If the tiger and other species that form its ecosystem have to be saved in India, the effort has to continue to intensify and involve everyone from conservationists and forest departments to citizens and the media. “We need to ensure that a proper zonation is done where development and wildlife conservation have boundaries. For instance, we need not upscale or build new roads, railway lines, mines, dams or other developmental infrastructure inside tiger reserves or other wildlife habitats. We now have the resources to avoid such areas but still do development in alternate locations. The implementation part of the existing framework needs to be strengthened. Many people in the field of wildlife conservation and science have been complacent and remained neutral. This attitude has to certainly change," says biologist Gubbi.

Saad Jung, conservationist and author, thinks that the Wildlife Act of 1972 needs to be re-examined and upgraded to current realities. “We have a protection law that’s very colonial and exclusionary. The Wildlife Protection Act was supposed to set some sort of structure for about 8-10 years and then a larger, more comprehensive conservation law would come in—that’s the idea with which M.K. Ranjitsinh Jhala (author and conservationist) drafted the Act. Conservation forces the officials to be in dialogue with local people... Unless local people participate, you’re not going to be able to save anything," says Jung.

A big threat that looms over conservation activities is wildlife trade. Tiger activists were driven up the wall earlier this year when China decided to ease a 25-year-old ban on the trade of tiger bones and rhino horns. After a global outcry, the decision to ease this ban was postponed. Goodrich of Panthera says any such development in the future would be “devastating" for tigers. “While some argue that a legal trade based on captive-bred tigers will reduce demand for tiger parts, I believe this is unlikely because there are tens, or potentially hundreds of millions, of users and only about 4,000 tigers left in the wild. Even if there is a reduction in the price of wild tigers, any increase in demand will be devastating for the animal," says Goodrich.

There is, however, cause for optimism. A new study published in the journal PLOS One in November pointed out that wild tiger population can improve in 18 tiger recovery sites across Asia—including eight in India—under optimal conditions. A WWF press release says that the population in these key recovery sites has the potential to triple in size within a human generation given strong site management. “Tigers are definitely indicators of the amount of protection (in wildlife areas) and the health of the primary ecosystem. They also have an umbrella effect in terms of conservation. By conserving tigers, we will end up conserving species that need areas which are similar to what tigers need. So a lot of species benefit, indirectly, from tiger conservation," adds Thatte.