Even as Indian women boxed, ran, shot, wrestled and fenced to glory this year, the most incredible story remains that of an 18-year-old from a nondescript town in Assam

OTHERS : People have now started recognizing me as well as my family,” says 18-year-old Hima Das in an email. She is currently training in Antalya, a resort city on the Mediterranean coast in south of Turkey. “There are people who want photographs and autographs when they meet me. So yes, life has changed quite a bit.”

The teenage sprinter from Assam has had a phenomenal year. She clocked 50.79 seconds in the 400m final at the Asian Games in Jakarta in August, winning the silver medal and recording her personal best. This dash was 1.18 seconds faster than the gold medal winning sprint at the Federation Cup held in Patiala in March. It is significant, especially for an athlete whose only focus, as she says it, is on improving her time. She’s on the mark here. Every micro second matters—remember the 1984 Olympics where P.T. Usha missed the bronze medal in the 400m hurdles by one-hundredth of a second?

Das won one gold and two silver medals at the Asian Games apart from the gold at the IAAF World Under-20 Championships in Tampere, Finland, in July, which was India’s first gold at an international track event. She was one of the recipients of the Arjuna Award, India’s second highest sporting honour, this year.

Das, whose first spikes were a locally manufactured pair of shoes that her father bought for her from Guwahati for ₹ 1,200, also signed a contract with German sportswear brand adidas earlier this year. From the paddy fields of Dhing, a tiny village around 30km from Nagaon town in Assam where she played football with boys, to the gold medal in Finland, and then the Arjuna list, Das has sprinted her way to becoming one of India’s sporting elite.

Upon her return from Jakarta, for example, Das was given a red carpet welcome at Guwahati’s Lokpriya Gopinath Bordoloi International Airport—she was met by thousands of fans and chief minister Sarbananda Sonowal. 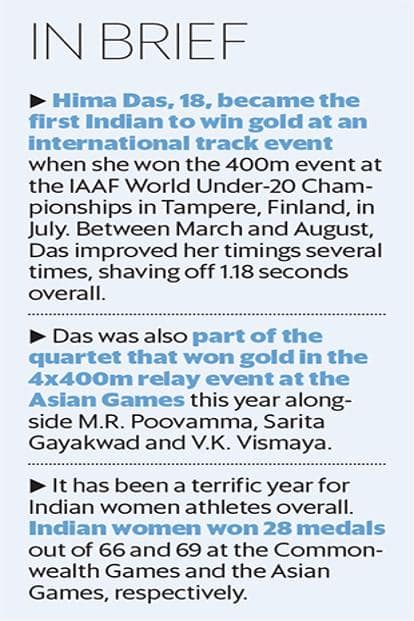 While life has clearly changed for Das, this has been a good year for Indian sportswomen in general. The country reaped its best haul of medals at multi-disciplinary events—the Commonwealth Games and the Asiads—as well as single-sport events. What stood out in this narrative is the performance of women athletes: they won 28 medals out of 66 and 69 at Gold Coast and Jakarta-Palembang, respectively.

As a mark of their increasing popular appeal, many of them featured on glossy magazine covers. Elle India’s digital cover for December, for example, features Das with M.R. Poovamma, Sarita Gayakwad and V.K. Vismaya—the quartet that won gold in the 4x400m relay event at the Asian Games this year.

“I think it’s the result of collective effort of the government and the sports federations to provide world class training facilities and coaches to the athletes, both girls and boys,” says Das. “I hope the performance of the women this year inspire other young girls to come up.”

Inspiring they have been. And for a few years now. Last year, it was cricketer Mithali Raj, who took her team to the 50-over World Cup finals in England; and weightlifter Mirabai Chanu who won at the World Weightlifting Championships in the US. This year has its own sporting heroes. Table tennis player Manika Batra, with her nails painted with the tricolour, won four medals in Australia; Dutee Chand buried the hyperandrogenism case on her way to the two silver medals in Jakarta; Swapna Barman, with 12 toes and a heavily taped face, fought a toothache and won India’s first Asian Games gold in heptathlon—these are some of the lasting images from 2018.

There was also Manu Bhaker, the 16-year-old shooting sensation who won golds at shooting world championships, as well as the Commonwealth Games; Vinesh Phogat who won India’s first Asian Games gold in women’s wrestling in Jakarta; and badminton player P.V. Sindhu who broke the finals jinx at the BWF World Tour Finals in December, becoming the first Indian to win the World Tour Finals. And, yes, there was M.C. Mary Kom, the boxing legend from Manipur who has repeatedly proved her detractors wrong. The 35-year-old southpaw won her sixth world championship, the most by any woman in the world, in November.

Far away from all the limelight, taking her Asian Games rejection in her stride, was Tamil Nadu’s C.A. Bhavani Devi, India’s only fencer with any international success, who won a gold medal at the Senior Commonwealth Championships in Canberra, Australia, late last month.

If she keeps at it (improving her technique), I think she will get her time under 50 seconds by the time of Tokyo Olympics.- Nipon Das

Hima takes chargeBut all things considered, Das’ year has been a bit more special, considering that until two years ago, the sprinter was actually playing football in her father’s paddy fields.

“I loved to play football. In fact, 10 years ago, I wanted to become a football player. I used to play with my cousins in the village. I even played for a club in Assam as a striker,” says Das. “But I also wanted to represent India at the international level and did not know the future of football to be honest. So I was trying to figure out what to do.”

One of the coaches asked her to participate in an athletics trial in 2017. The time between then and the Asian Games silver medal has mostly been a blur, she admits. When you measure life goals in seconds, years tend to get blurred

It is extremely difficult to get hold of Das for an interview. When you do and ask about her incredible journey, the answer is always “Next”. Das believes in the economy of speech, giving away just enough to suffice.

What is on full display though is her swagger—in the golden streak in her hair or her rockstar gait or in the way she spreads her arms like wings, rousing the crowd before a race. Her coaches talk about her discipline—Das is always on time and among the athletes who train the hardest.

“People see the medals, the matches. They don’t see the grind behind it,” wrestler Navjot Kaur, who became the first Indian woman to win a gold at the Asian Championships in Kyrgystan in March, had told Mint in an earlier interview at a national training camp in Lucknow.

Wins are addictive but the routine behind them, mostly boring. Success is a function of talent and the ability to better the margins. Before they leave spectators mesmerized by the picture perfect cover drive, an impossible looking bicycle kick, an immaculate backhand cross-court pass or a breathtaking Produnova, athletes perfect these moves through pain and fatigue, whether in form or out of it, over countless hours, every day, until the moves become second nature. They have to. Because in some sports, the cost of missing a turn or mistiming a jump can be fatal.

“We usually have a fixed routine for our trainings,” says Das. “It is important that we are disciplined throughout because being athletes, those little things impact our performances on the field.”

It is not surprising, therefore, when she brushes away questions about her struggles. “If you want to achieve something great you have to work hard for it. It is as simple as that,” says Das.

Her parents—Ranjit, a farmer, and Jonali, a homemaker—are a little less measured. “It was difficult,” her father says over the phone from Dhing. “She used to travel from home to Guwahati (140km) everyday for practice. Initially I used to accompany her but later she started going on her own. Sometimes, I would feel scared as she would return at 11pm, travelling by train. But she told me not to feel scared, reassured me thashe wasn’t afraid.”

Today she calls home once every two-three days to talk to them, says Ranjit.

“I never imagined that she would achieve so much. So I am very happy for her,” says Ranjit. He recalls how he pushed his daughter to go for the Asian Games in Indonesia.

“She was in a dilemma. If she went to Jakarta, she wouldn’t have been able to appear for her higher secondary exams. I told her that exams would happen next year too. But the Asian Games happen only once in four years,” he recalls telling his daughter.

“Seeing her passion and determination for the sport, I have always encouraged her,” he says.

Hima has always been determined. When the coaches asked her to compete in the 400m discipline, she just nodded. Even champion sprinters in the 100m and the 200m categories find it difficult to adapt to the challenges of the quarter-mile event. But while most athletes dread the last 50-100m of the race, due to the accumulation of lactic acid in the muscles, Das just takes off.

For the first 300m in Tampere, it looked like the gold would go to American athlete Taylor Manson. But then, suddenly after the last turn, Das surged ahead in lane 4. It was like watching Usain Bolt hitting the invisible next gear in the last 20m of the 100m dash at the Rio Olympics 2016.

“The last 100m has always been my strength,” Das had told Mint in an interview after the race.

“I am a little slow off the blocks. So the 400m suits me better as it gives me the time to start slowly and then accelerate which is not possible in 100m, 200m,” says Das.

Having played football in her teens helped her build the stamina for the last 80m of the 400m races. Even today, when she can, she prefers watching football videos over athletics ones. Lionel Messi and Sachin Tendulkar are her two favourite athletes because they are “the gods in their respective sports”.

Das says the gold at U-20 world championships and the silver at the Asian Games are her two most memorable runs. The medal ceremony at Tampere was also the first time the world saw the typically impassive Das get a little emotional. When the flag went up and the national anthem was played, her eyes welled up. “It was a magical moment. I don’t know how but it (tears) just happened,” says Das.

Her best timing of 50.79s is still a bit behind the world record of 47.60s set by German sprinter Marita Koch in 1985 and the Olympic record time of 48.25s set by French national Marie-José Pérec in 1996. What can help improve her timing is better technique.

“When she started running, she didn’t know the ideal stride length and frequency. Her running action also needed correction,” says coach Nipon Das. “But she is one of the most hardworking athletes I have seen. She has worked on the technicalities and improved her timing a lot.”

Hima, who had said previously that she didn’t understand technique when she started and just wanted to run, has learnt a few things about “how to start a run, how to carry the momentum and how to accelerate and also your body movements”. And she believes it has helped. Her timing has improved this year.

“I am quite happy with how things have turned out for me this year. I hope I can maintain the momentum in the coming years,” she says.

So what is she working on with head coach Galina Bukharina (appointed by the Athletics Federation of India), a former Russian Olympic bronze medallist Olympian herself, in Turkey? “A couple of things,” says Das. “It is a secret. But it is all about improving my timing.”

“If she keeps at it, I think she will get her time under 50 seconds by the time of the 2020 Tokyo Olympics,” says coach Nipon Das.

Indeed if that happens and she stays fit, a podium finish in Tokyo doesn’t look improbable.

Bhaskar Sarma contributed to this story.