The year AI art made headlines

There is a black-and-white photograph in Life Magazine’s August 1949 issue of a man before a large canvas laid out on the ground. His body is folded into a peculiar squat; a cigarette dangles from his lips. His fingers are stained; his dungarees carry blotches of colour, as he splatters paint on the canvas. The man is Jackson Pollock, the influential American expressionist artist. Pollock’s practice exemplified the idea of an archetypal artist: you weren’t one unless got your hands dirty.

That was a different time, before the advent of Artificial Intelligence (AI) and its subsequent relationship with art, when the possibility of plucking a human being out of art-making was unthinkable.

In October, Christie’s sold a rather unusual artwork: a portrait that, with its smudgy features and contours, would, under normal circumstances, have seemed unfinished. But it found a spot at one of the world’s most reputed auction houses. That day, the Portrait Of Edmond de Belamy, an AI-generated canvas print, sold for a staggering $432,500 (around ₹ 30 lakh) (it was initially expected to be sold for $7,000-$10,000). The auction marked a landmark moment —AI had officially announced its competitive presence in the art market.

Almost overnight, three young French men with backgrounds in machine learning and business, who knew little about art and had never been represented by a gallery, became a global name. These men, who collectively called themselves “Obvious", had trained AI to create a series of incongruent portraits of fictional characters that seemed to belong to 18th century French aristocracy. One of these caught the eye of a French art collector Nicolas Laugero Lasserre, who purchased Le Comte de Belamy from the series for $11,400. And later of course, Christie’s sold the Portrait of Edmond de Belamy.

In a nutshell, AI had managed to achieve all that human artists strive for through their lives.

Recounting the days leading up to the auction, Richard Lloyd, international head of prints and multiples sale, Christie’s, said that there was “a fascinating dialogue about new modes of artistic creation" brewing. “We were pleased to see so many new and established collectors, art enthusiasts, and even art critics take notice of this exciting and dynamic area of the art market, which is set to expand rapidly in the years ahead."

Lloyd’s optimism reflects the pulse of the art world, which has always had a predilection for the envelope pushers, the bizarre and the absurd. In 1950s, for instance, Pollock rose to prominence for abandoning the palette, picking up cans and a trowel to drip and splatter paint to make his now iconic abstract works. Andy Warhol took a conceptual leap with iconography inspired by pop culture. Then there was Marcel Duchamp, who notoriously took a urinal, turned it on its head, signed “R.Mutt 1917" on it and called it art. Now, the art world had turned towards algorithms and codes to see what lay ahead. But does AI have what it takes to usher in the next evolutionary step in the creation of art?

In India, Nature Morte, a gallery in Delhi dedicated to showcasing avant-garde art, decided to bravely test the waters. It hosted the country’s first (and so far, only) AI art exhibition in August called Gradient Descent, which displayed creative collaborations between seven artists and algorithms, which included works by Harshit Agrawal, possibly the country’s only artist tinkering with AI and codes right now. “The implications and repercussions of machine-led creativity are staggering," says the gallery’s co-director, Aparajita Jain. “Peter Nagy and I chose to hold the exhibition because AI is going to affect us all in more ways than one and we wanted our visitors to be a part of this conversation." But while the show opened to a full house, the artworks, many visitors thought, were underwhelming. Rather than being ingenious creations (as one may have expected AI to create), they appeared amateurish and not necessarily pleasing to the eye. 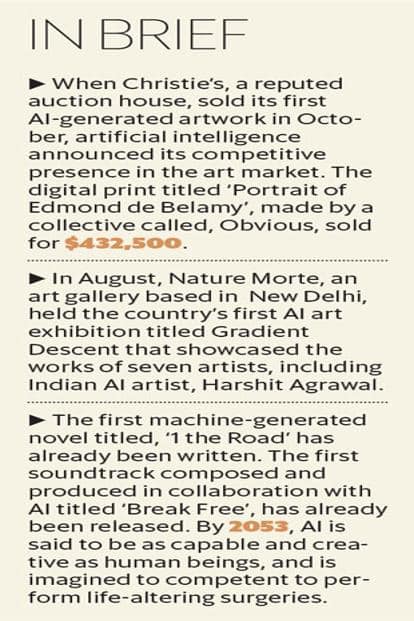 A majority of people may think that AI art (currently made by machine in collaboration with a human) is something of a new development; however, it has been around for decades. In 1965, it was in a modest gallery at the University of Stuttgart, Germany where a small collection of drawings made by German artist Georg Nees were put on display. The show aroused “uneasy feelings" among its viewers. Nees had begun exploring the possibilities of computer art in the 1960s, and this exhibition showcased those works. The conversations that emerged from the show highlighted a few concerns that uncannily exist even today: “Was this supposed to be art, if it was true that a computer had produced the works? To what extent was the computer the creator?" (Art in the Time of the Artificial, published by MIT Press, 1998). A more known hybrid-practice is by the British abstract expressionist artist, Harold Cohen and AARON, the computer software that could make freehand drawings autonomously in the 1970s. A few of these works are housed at London’s Tate gallery.

It is only recently that the world has had what one may call, The Great AI Art Awakening. It began when Google introduced DeepDream in 2015, an algorithm which created psychedelic, quasi-nonsensical images. “Google’s DeepDream used a technique called ‘deep neural networks’ which could learn a generalized understanding of millions of images, lines of text, musical notations, and start creating outputs from that understanding. It was a process loosely similar to the working of our brains," explains Agrawal, who is an MIT Media Lab graduate. DeepDream gained immediate popularity due to the accessibility it offered: Google released its source codes to the public, which allowed anyone to play around with it. “So, it allowed me to push towards a more creative collaboration with my machine, more than using it only as a tool," adds Agrawal.

Past experiments notwithstanding, it’s only this year that AI art made big news, with a number of formidable galleries and museums legitimizing AI art by bringing those works into a mainstream context. For instance, Victoria and Albert Museum recently held Artificially Intelligent, an exhibition that brought the works of AI artists’ whose pieces raised complex questions about our dependence on and relationship with machines; while ZKM Center for Art and Media, Germany held Open Codes which showcased artworks made with code. In May 2019, the Barbican, London will open AI: More than Human, which will explore the relationship between humans and technology. “AI Art’s presence is no longer restricted to the bounds of tech-art festivals anymore," observes Agrawal. Mario Klingemann, who works with AI, data and code, agrees. “Judging from the invitations I get to art shows and festivals and the amount of coverage this topic is getting in the media, the interest in AI seems to be growing exponentially since the beginning of 2018," says the internationally recognized pioneer in the field of AI.

Artificial intelligence is “trained" by being exposed to a curated selection of images, materials, documents or drawings, called a dataset. The algorithm learns the visual information and then produces its own interpretation of the works, pixel by pixel. The machine, however, isn’t provided any information regarding form or colour theory. This is where the human artist steps in by tweaking the algorithm and steering it towards creating the visuals the artist hopes to produce.

AI art could be seen as an invasive species that is able to adapt quicker than other art forms to the rules and parameters that drive the art world.- Mario Klingemann

There is one question that continues to linger in everyone’s mind: Could humans eventually be replaced or outlasted in a field that has quintessentially been “theirs" since the first cave paintings? “Machines were made to benefit mankind and to make our lives simpler. Ultimately, we are in charge, if we want to remain in charge we have to understand what we have created and then deal with it accordingly," says Jain. Klingemann offers a different opinion: He feels that art isn’t a race, nor will there ever be a single winner. “Art is an ecosystem where all kinds can find a niché to strive or survive," he says, adding, “AI art could be seen as an invasive species that is able to adapt quicker than other art forms to the rules and parameters that drive the art world."

There is one area in art where AI is the undisputed winner. When it comes to spotting forgeries, artificial intelligence leaves the human eye far behind by looking at a single brushstroke. The machine-learning algorithm built by researchers at Rutgers University and the Atelier for Restoration & Research of Paintings in the Netherlands, is trained to identify characteristic elements of brushstrokes belonging to respective artists—how the line curves, extends or falls, or how thick the stroke is. After being fed close to 300 artworks by masters such as Henri Matisse and Egon Schiele, the algorithm deconstructed about 80,000 handcrafted strokes, where the recurrent neural network (RNN) learned the specific idiosyncrasies of each stroke and associated it with its owner. Once trained, the algorithm could identify fakes with 70-90% higher accuracy than human experts.

But can AI compete in other creative fields? When it comes to authoring a novel, AI certainly can. 1 The Road (published by Jean Boîte Éditions), was introduced as the first novel written by a machine, where an apparatus consisting of a camera, a GPS, a mic and a clock, documented the journey of a Cadillac from Brooklyn to New Orleans. The creator of the contraption was Ross Goodwin, who relies on neural networks to generate words. Was the book a masterpiece? Perhaps not. In the field of music, breakthroughs are already being made, where AI is now capable of composing music. Amper, for instance, is an AI interface that composes, produces and artistically collaborates with human musicians. In August 2017, American Idol singer Taryn Southern teamed up with Amper (the software which generated chords, tempo and melodies) to release a track titled Break Free.

In the theatre of art, virtual reality (VR) and augmented reality (AR) have already been featured in mammoth fairs like Art Basel, Hong Kong where distinguished artists, Anish Kapoor and Marina Abramović exhibited their independent, artificially crafted VR worlds in March. “I think that one thing we cannot deny is that the world is getting more and more digital," Adeline Ooi, director, Art Basel, Hong Kong, told Mint in an interview earlier this year. “It is up to you whether you choose to ignore it or not...However, I would be very afraid if it was all virtual—that would scare the life out of me."

It is a promising time to consider what these technologies mean to us and how they have been intricately woven into our lives. “Or how they will augment our inherent ways of doing anything," says Agrawal. And while AI art is still in its embryonic stage, artists like Klingemann feel that things will develop rather quickly. “The current technological progress suggests that the direction will go towards higher resolution works with more details...Overall photo-realism will increase but the surreal compositions will remain."

Whether we are aware of it or not, AI has been embedded into almost every aspects of our lives: from manufacturing and engineering to policing, healthcare and creativity. As we become more and more reliant on these invisible intelligent systems, where our dependence on the machine is normalized, we might need to take a step back to see how much we are willing to put at stake, when it comes to integrating AI into the realm of art.