The shape of water

In Ranjit Hoskote's latest book of poems, people, animals and cities live in the grip of a singular, life-giving force

The arc of Ranjit Hoskote’s poetry reminds me of the graph of water, moving from the solidity of ice, with its vulnerability, to the looseness of liquid, as accommodative as human imagination. For Hoskote’s writing career, as art historian, curator and poet, began with a creative investment in a version of permanence—the painting, a work of art. Zones Of Assault (1991), his first collection of poems, and the books that followed, The Cartographer’s Apprentice, The Sleepwalker’s Archive, Vanishing Acts: New And Selected Poems 1985-2005, and Central Time, were often about the dialogue between art and history, primarily the violence of history, both as a record and the pull and blood within the discipline itself. Many of the poems were about art, art objects, and were intellectual homages to artists, poets, art curators. There’s an invisible violence in a work of art itself—it comes from perspective, how the artist exerts their power over us by deciding how we should watch it, in terms of distance or the tilt of the head, among other things. The painting makes us stationary, it controls us, it wields power over us. Hoskote’s early poems, I see retrospectively, are an intimate investigation of this power —annotated by his aesthetic complicity in that kind of power itself: “The sliced apple/ has elephants’ eyes for pips:/ they stare up at the knife/ that has brought them to life" (from Still Life).

How does one liberate oneself from that power? Hoskote’s recent work seems to be a move in that direction. To dismantle the solidity of space, the near-permanent territoriality of a painting, he moved towards time, the partner of space on the Y-axis. His last collection, Central Time, was structured to the awareness of the shataka, the century, the imagination of the ancients condensed into that number (Wordsworth saw “ten thousand [daffodils] at a glance"—modernity amplified the spatiality of consciousness). “The graves are numbered, without verses or seasons to ground them," Hoskote writes in Numbers from Central Time. It is not difficult to see how looking at time, its units and its sculptures, both miniaturist and extravagant, with a watchmaker’s energy and attentiveness, was a search for fluidity. In some of the poems, particularly those about the violence of humans in the 20th century, one had the sense of Hoskote trying desperately to bring those outside the roll call of time into its margins.

In Jonahwhale—what an astonishing cover from the Naoki fish-print collection—Hoskote makes a conscious move in the same direction. His project is to bring the invisible to light as it were, hence the choice of water as the habitat of these poems. Water—transparent, translucent, and yet hiding so much. The invisibility of water in our consciousness, not only in the way the supremacist tendencies of land decide our policies and politics, but also our aesthetics and our imagination, the creatures that live inside it, the water that moves inside us, silently, without announcing itself, except in moments of privacy—the poems in Jonahwhale, which can be read as a history of migration(s) of water, come from there, from water, where the first life-form is said to have emerged.

One smiles to open a book to the line, “Last word on the subject, I promise." It’s from the first poem in the collection, The Churchgate Gazette. By the time we reach the end of the poem, moving through various kinds of bodies of water, something has happened: “I open my eyes." This blur between “first" and “last", open and close, marks the collection, and going back, as it does, to T.S. Eliot’s Time Present-Time Past-Time Future matrix (the subject of Hoskote’s poems in Central Time), we cannot forget that this is the aesthetic of water—its seamlessness, its refusal to mark any distinction between beginning and end. So here we are, in the middle always, not necessarily in medias res, but in the middle of water, for to be inside water is always to be inside its middle: “Birdsong disturbs the king of incomplete lives./ He wakes up in the middle of the novel he’s writing/ in the Midnight Hotel./ ... He is back/ where he began".

It is easy to read this as a critique of an aesthetic choice, of a kind of writing (“incomplete", “middle", “midnight"), but all this is happening against the background of the sea (the poem is called The Churchgate Gazette), and the first word of the poem has just returned as a kind of moral: the sailors’ wives “were singing the last songs of the whales". This awareness, of the death of water and its residents, marks nearly every poem, and in this Hoskote makes us morally aware of how complicit we are in the assassination of water. Like “last", the word “rust" (as if the rhyme were a device of emphasis) occurs a few times. Rust, as we know, is a function of water, but this is rust on bodies—a “rusted smile", and “skin of rust and flame". Is this what will happen to life in the post-water age? Will we rust to death, like metal? Against this turning to metal is posited a world that will never rust—of glass and light. Rust is preferable to that kind of inertness. For blood—water by another name—can move only if emotions do: “Find affection, I told myself. That’s fundamental."

As in his other collections, one of the principal tropes in this book too is the map. “Whatever you like, I’ve got a map that looks like it" (from The Map Seller). Maps and atlases, what are they made of? Nouns, only nouns. And so Hoskote uses, as he has before, the spirit and aesthetic of the catalogue. Take this second stanza from The Atlas Of Lost Beliefs, for instance: “with apsaras, kinnaras, gandharvas, maenads,/ satyrs, sorcerers, bonobos, organ grinders,/ stargazers, gunsmiths, long-distance runners,/ gravediggers, calligraphers, solitary reapers,/ beenkars, troubadours, rababias, ronin,/ nagas, pearl divers, Vandals, Goths,/ mummers, snipers, collectors of moths,/ hobos, dharma bums, bauls, drifters,/ djinns, mahjubs, marabouts, qalandars,/ griots, mad hatters, speakers in tongues,/ trippers, star angels, batmen, punks,/ eggheads, buffoons, lay preachers, agitators,/ friends of the court, friars minorite, agents provocateurs,/ bird-spangled shamans, fainting oracles, screeching owls,/ wise men of Gotham, and women who run with wolves ..."

This encyclopaedic list, essentially of movers and misfits, rejects of neat social structures, is also part of the map: People become places, relationships move, like water, by the water. And so it is not a surprise to find Ahab—Hermann Melville’s Ahab, his life embodied in the morality of water as it were—in a poem: “Across steep tides, through walls of water, his life has always/ been pursuit./ As the ship splinters on the reef,/ the rigging becomes his noose./ Brine blistering his throat, he thinks:/ If only I’d harpooned this monster on a page." (from Ahab)

The people and animals who live on water, inside water, by the water—the poems in this collection are about them. What exactly is Hoskote trying to do? The counterpart of the Novel of Ideas could be called Poem of Ideas. Hoskote’s poems are embedded in that cellular space of ideas—in them here is a manifesto of inclusion, of breaking the regimes of territoriality that living on land engenders in us, of amphibiousness, of fluidity, of living as trans-creatures, with gills and lungs. Hoskote’s antonym for water is glass: “As a river traps the shadows of fish/the mirror trawls its freight of daily acts/ that hover midstream, then quiver, flash,/ plunge into sun-mottled depths:/ bodies erased from a surface still rippling/ with the phosphor currents of their fins" (Glass). The soullessness of glass is revealed to us in these poems—it is a metaphor of our lives. And so, instead of reflection and its vanity, immersion, depth, movement, movement everywhere, without direction, without roads, without maps. Glass can’t weep, it can’t even hold tears, tears slip and fall. Water weeps, its tears return to itself. In water is the cyclical nature of life most easily revealed. The collection ends with a poem called The Poet’s Life. In this list-poem, the poet “called out to the spirit of drowned sailors". Jonahwhale leaves us with the desire to be those sailors.

There’s a colour whose name I’ve lost
to the ash fleece of cloud, the grackled light
of a monsoon sky seesawing in the gaze,
unframed, a trap for the sailboat wheeling in the bay:
this colour that hovers between tenses,
some call it violet, others squeeze their eyes shut
when it surges through slate-grey folds of water,
either not-yet or too-late, never tame at your heel.
But look, the rocks are coming into view,
dazed seals resurrected from the waves.
The tide’s worked itself loose of the shore
and drifted out. There are no explanatory notes.
What’s left behind is not the remainder.
There’s a colour whose name I cannot speak. 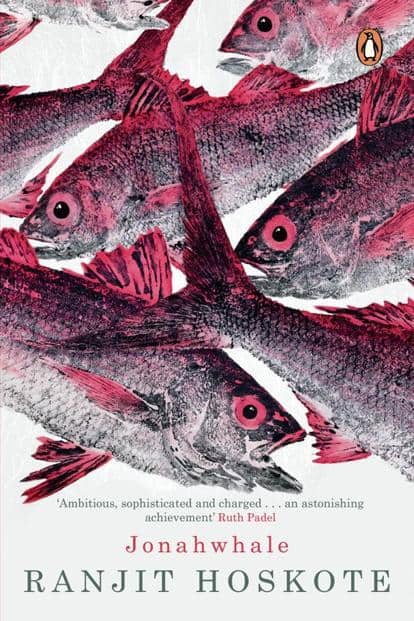