The Ring Of Truth: Jewellery and the history of feminism

Wendy Doniger looks at the mythologies around sex and gender to show how jewellery has enslaved women, rather than liberating them

Wendy Doniger is a sparkling interpreter of religious thought and mythology. Her narratives are rigorous and multi-referential, often subversive and playful. Over 16 books, Doniger, essentially a Sanskrit scholar, has written about Hindu gods (for instance, why, or rather how, Shiva is an amalgam of asceticism and eroticism), about androgyny in Hindu mythology, and about sexual masquerades and gender politics in Greek and Sanskrit textual traditions. She writes about religious myths like a storyteller, not a daunting savant or religious leader.

She became famous in India after Dinanath Batra, a Hindu ideologue and educationist, sent a legal notice to her and Penguin, her publisher, when her book, The Hindus: An Alternative History, was published here in 2010. Batra objected to her depiction of Hinduism in the book. So while Doniger, in her mid-70s, is the most prolific and accessible Sanskrit scholar in the world today, she is also reviled by some sections in India.

Her new book, The Ring Of Truth: Myths Of Sex And Jewelry, deals only partly with ancient India and Hindu figures. It is a culmination of her studies across mythologies and civilizations. She returns to the turf she masters: mythologies around sex and gender. She strips the luxurious, romantic veneer off jewellery, the most common of human acquisitions, to tell us why the foundation of the interactions between the human sexes is lop-sided across cultures and continents. 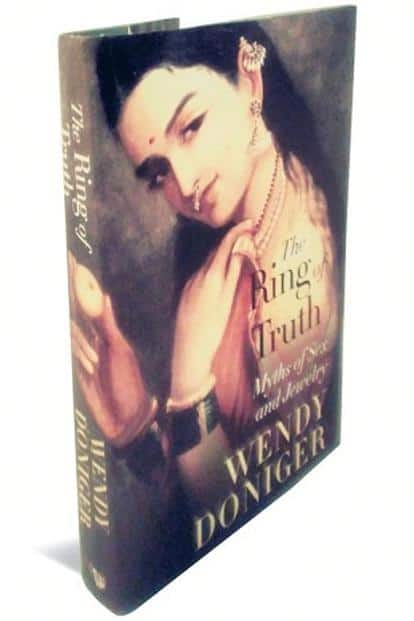 The Ring Of Truth—Myths Of Sex And Jewelry: By Wendy Doniger, Speaking Tiger, 397 pages, Rs899.

After Peter Jackson’s re-imagining of J.R.R. Tolkien’s stupendous Middle Earth saga, the ring has become part of pop culture canon. The ring Doniger is interested in is about power in a much more primitive, human sense. It is power that emanates from thwarted emotions and inherited privilege. She takes us back and forth through ancient India (Kalidas’ Shakuntala and Valmiki’s Sita), medieval European romances, Cinderella, Shakespeare, Marie Antoinette, Elizabeth Taylor, the DeBeers cartel and the faceless consumers of the spiel that diamonds are forever, and Candace Bushnell’s Sex And The City, in which the dazzling Samantha buys her own precious rocks, to wear on any finger she likes.

Like her last book, Doniger builds up the narrative in detailed fragments, zeroing in on episodes, gestures, even imagined dialogues, each illuminating a woman’s relationship with a piece of jewellery and how literary and mythical figures have used it for social recognition, wealth as well as revenge. Across 11 chapters we get intricate vignettes of desire, sex, gender roles and reversals, and by the end, the fragments build up to a mammoth tree—by then the book is a compendious history of feminism itself. The Ring Of Truth is not a book to be read at one go. You read a few chapters, easily remember them because of the gripping details, and return to what follows.

Doniger begins with a character from her own childhood—an uncle, who called himself a “gemologist". He claimed to know much more about diamonds than the DeBeers cartel. She takes us through the stories behind some pieces that she herself owns, and why, the “dicey side of jewellery" is in her blood. One of the earliest chapters deal with the myth of the ring swallowed by fish—part of folklore, literature and mythology of many cultures since the 17th century. Shakuntala’s ring of memory is also a ring inside a fish. Sita’s jewels of recognition when she is captive in Lanka is also a ring of memory. So characters associated with them overlap and interject in one chapter.

While building up the multi-stranded narrative, Doniger stays faithful to the details of a story and its cast of characters. Her observations and conclusions are often weaved into the descriptive parts, livelier because of her wit and gentle sarcasm: “In general, the married woman who wears jewelry in her husband’s absence is a bad wife. But since Sita is a princess, jewelry is an essential part of her being; therefore, she remains a good wife even when she wears her jewelry in exile from her husband." Following a chapter about “the slut assumption in the 19th and 20th centuries", and Mae West’s play Night After Night, Doniger reminds us, “Years later, Elizabeth Taylor remarked, ‘How many young women get a set of rubies just for doing something wholesome like swimming laps?’ (Taylor, however, did get a Cartier necklace, bracelet, and earrings from her then husband Mike Todd for swimming laps in their pool in 1957). ‘You don’t get 137 million dollars in gems by marching in feminist parades,’ Larry McMurty said of Taylor."

Jewellery has enslaved women, rarely liberated them. The American idea of “happy ever after" that a solitaire or an eternity ring promises—a diamond is forever; it is a girl’s best friend—is the logical end to centuries of women who have fallen for this promise. Both man and mother validate the need for a ring on a woman’s finger. Doniger is optimistic about the woman who buys herself jewellery in the age of the metrosexual man, although she does not spell it out. She is concerned with the permeability of myths.

The idea of the loyal and passionate woman with a ring has dramatic fodder in fiction even today. In director Sanjay Leela Bhansali’s version of Romeo And Juliet, Goliyon ki Raasleela Ram-Leela (2013), the adorned ring finger is Juliet’s punishment. After Leela returns with a ring on her finger, given by her lover, the Rajadi heir Ram, the matriarch of the Saneras, played by Supriya Pathak, brutally whacks Leela’s ring finger with the hefty tool she uses for cutting betel nuts. Deepika Padukone’s Leela is a heroine of melting loveliness as well as bristling wit and sensuality. The finger, snapped into two, bleeds into raindrops and she falls from her imperious passion.

Doniger tells us in this book that the ring, and by extension, myths, can be as reliable an arbiter between the past and the present, or as accurate a portrait of our culture, as facts and scientific proofs. The myth is bound to spill over.