The race for the 2021 French Open title just got hotter

With Daniil Medvedev and Stefanos Tsitsipas about to face off, and Elena Rybakina beating Serena Williams, Roland Garros is holding its breath 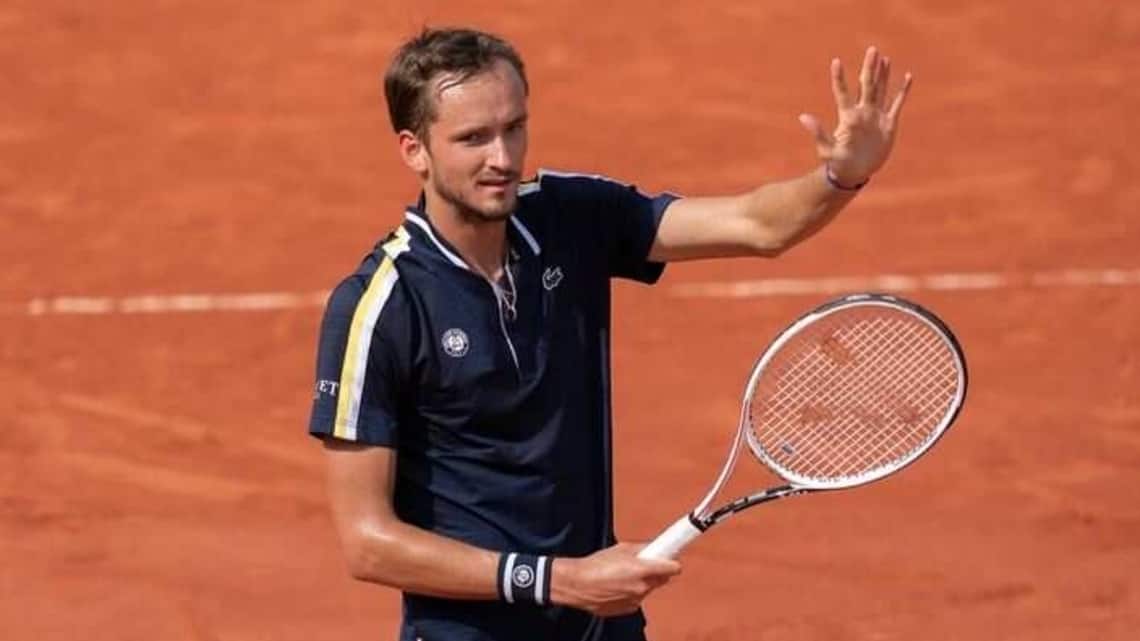 Stefanos Tsitsipas hopes to stay on course for a first Grand Slam final when he meets rival Daniil Medvedev at the French Open on Tuesday, while the impressive Elena Rybakina is aiming to back up her win over Serena Williams.

Greek fifth seed Tsitsipas is trying to reach a third successive major semi-final, having lost a thrilling a five-setter to Novak Djokovic at Roland Garros last year. Blocking his path is second seed Medvedev, the Russian who hadn't won a match in four previous visits to the French Open but has looked increasingly assured on clay over the past week.

Medvedev, a runner-up at the 2019 US Open and this year's Australian Open finalist, holds a 6-1 head-to-head advantage over Tsitsipas. He beat the Greek in straight sets in the last four in Melbourne in their most recent meeting.

"He does serve extremely well, I have to say. He has improved over the years with his serve. This is going to be something that I will have to face," said Tsitsipas, who compared Medvedev's serve to that of John Isner. "Of course, myself playing well, I feel like I don't have to think against who I'm facing or not, I just have to play my game, let the rest be witnessed."

Medvedev could take over the number one ranking if he reaches the final and Djokovic does not. He has a career win-loss record of 15-20 on clay, but the return of Roland Garros to its traditional May-June slot and far warmer temperatures have helped the Russian shake off bad memories of past editions.

"I'm able with these balls, with these conditions, to make shots that are not going to let my opponent attack me straightaway. Then I can take control of the game and be a great mover on clay," he said. "Definitely a better feeling than losing the first round, going home on Tuesday like I think two or three times I lost here Sunday. It's not a good feeling. I hope it's going to be better with every year."

The winner of the night match, the last to be played behind closed doors before the easing of a nationwide curfew, will go on to play Alexander Zverev or newcomer Alejandro Davidovich Fokina for a spot in Sunday's final.

Zverev, seeded sixth, is through to the French Open last eight for the third time in four years. He has won his past 12 sets after recovering from two sets down against qualifier Oscar Otte in the first round. "If I play my best tennis I'm difficult to beat," said the German. Spain's Davidovich Fokina, who turned 22 last week, is appearing in his first Grand Slam quarter-final.

World number 22 Rybakina, who denied Serena Williams in her latest bid for a record-tying 24th Grand Slam title, is the highest-ranked player left in her half of the draw. The 21-year-old made the final at four of her first five events in 2020, but her momentum was then stalled by the Covid-19 shutdown.

Born in Russia, but representing Kazakhstan, Rybakina has advanced here without losing a set. She next meets doubles partner Anastasia Pavlyuchenkova, back in the French Open quarter-finals for the first time since 2011. "The end goal is always to win the tournaments and dream and go of course to win the Grand Slam," said Rybakina.

"So every time I step in on court I try not to think against who I play. Just try to do my work, follow the plan which we have. If it works well, I'm winning, and if it's not, I'm just learning."

Tamara Zidansek, the first woman from Slovenia to reach the quarter-finals of a major, takes on another player breaking new ground in Paula Badosa. The Spaniard is a former junior champion at Roland Garros and this season's best performing clay court player.

Also Read: Roger Federer and 55,000 ways of hitting a ball