The politicization of the colour pink

The colour pink fought decades of gender-normative stereotypes to emerge in 2017, not only as a symbol of gender fluidity but as the colour of global resistance. We examine the metamorphosis

The signs appeared quietly. In isolated blips at first, and then with increasing frequency, till they could no longer be ignored. In 2014, it was the single visual identifier of Wes Anderson’s The Grand Budapest Hotel. In 2015, Drake championed it in his Hotline Bling video, inspired by legendary light-and-space artist James Turrell. In 2016, the ubiquity of a particular dusty blush hue led to its christening as “millennial pink" by New York magazine, and with that, its takeover of the cultural zeitgeist was complete.

But pink’s road to reinvention hasn’t been easy. Though it only came to be associated with femininity fairly recently (after the end of World War II, canny advertisers began directing pastel pink appliances and upholstery towards women “largely as an antidote to the military-inspired fashions and textile rationing of wartime", according to Bloomberg), the tag has proven to be nearly impossible to shake off. Thanks, however, to an uptick in dialogue about gender fluidity, spurred by television shows such as Transparent and Orange Is The New Black, and a more vocal, visible fight for LGBTQ (lesbian, gay, bisexual, transgender and queer) rights, the global lexicon began to slowly stretch beyond reductive gender-binary terms. And pink has emerged as the surprising symbol of this blurring of lines. To be specific, it is the aforementioned millennial pink, a colour that was everywhere you looked last summer—on sneakers, sofas, social media feeds.

According to the New York magazine feature: “It’s been reported that at least 50 percent of millennials believe that gender runs on a spectrum—this pink is their genderless mascot." And somewhere along the way in its journey to post-gender, pink also became post-pretty. Heck, pink became cool. Free of its gender-normative shackles, it finally had the leeway to have personality, layers, subjectivity.

the Women’s March in Washington, DC, in January

Reading the global tea leaves, Pantone, a company that sets industry standards for colour, picked, in an unprecedented move, “the blending of two shades" for its 2016 Colour of the Year: Rose Quartz (a warm rose) and Serenity (a cool blue). “In many parts of the world, we are experiencing a gender blur as it relates to fashion, which has impacted colour trends throughout all other areas of design," explained Pantone Color Institute executive director Leatrice Eiseman in a press release.

This year, although it was a yellowish shade of green that got top billing, Pantone included two shades of pink at opposite ends of the spectrum in its Spring 2017 colour report: Pale Dogwood, a soft blush, and Pink Yarrow, a deep fuchsia. But why should Pantone’s choices matter to us?

Because “Every December for the last 26 years, Pantone ‘predicts’—and consequently helps influence—the single hue that the design world will go nuts about for the next year," according to business magazine Fast Company’s design offshoot Co. Design.

And go nuts it does. “In 2017, pink has gone rogue," proclaimed a recent piece in The Guardian. Spring/Summer 2017 runways saw pink displaying its full potential: from powdery at Sanchita, Huemn (both from India) and Givenchy to bright at Céline and Balenciaga, to bold at Haider Ackermann and Valentino. The SS17 menswear shows, too, got their dose of pink, courtesy Gucci, Topshop and Ackermann (again). Raf Simons’ sold-out collaboration with adidas includes a pastel-pink version of the iconic Stan Smith shoe, and Nike’s newest Air Force 1 Jewel Swoosh sneaker for men comes in “Pearl Pink".

Gucci’s Alessandro Michele, whose love for the colour is well-documented, told The New York Times at his Resort 2018 show in Florence last month: “Pink is very powerful. It makes you feel sweet and sexy, also if you are a man." A recent piece for Esquire answered the question, “Should you wear pink?", with a resounding, “Hell yes, you should." Vogue.com ran a piece last year titled “Why Pink Is The Most Radical Colour In The Rainbow Right Now", with the writer stating: “It’s tough to think of a single hue with which to fly your freak flag and subvert gender norms better than pink."

In other words, pink now sends out a message loaded with a subtext. It’s impossible to discuss the politicization of this colour, and indeed its projection as a signifier of strength rather than frailty, without mentioning the Gulabi Gang, India’s fuchsia sari-wearing group of female vigilantes. The group’s leader, Sampat Pal Devi, explained this sartorial choice to Vice magazine back in 2008. “In rallies and protests outside our villages, especially in crowded cities, our members used to get lost in the rush. We decided to dress in a single colour, which would be easy to identify. We didn’t want to be associated with other colours as they had associations with political or religious groups. We settled on pink, the colour of life. It’s good. It makes the administration wary of us."

A movement that harnessed the power of pink early on was the 2009 Pink Chaddi Campaign, in response to right-wing group Sri Ram Sene’s attack on young women at a bar in Mangaluru. Nisha Susan, one of the organizers, wrote in an op-ed for The Guardian: “It amused us to… send pretty packages of intimate garments to men who say they hate us."

Then, in a blend of attempted feminism and right-wing nationalism, the RSS’ women’s wing, Rashtra Sevika Samiti, recently held a summer training camp for young girls—outfitted in pink-border salwar kameezes—to teach them how to protect themselves and also “guard (their) country, its traditions, its sanskriti and its languages," as the Samiti’s Chandrakantha, chief guest at the camp event, put it.

Pink may have started rubbing shoulders with politics, but sports is an arena it’s long been shut out of. Serena Williams’ pink-pleated tennis outfits at last year’s US Open, which the athlete described to the US Vogue “with obvious delight", made headlines because it embraced the eye-catching colour. “The candy-colour shade has been Williams’ favourite since girlhood, and regularly creeps into her beauty routine, too—a petal lip here or cotton candy nail polish there," reports the piece. “I always try to wear it," Williams said. “Yesterday, I had a rose-colour eyelid, which was fun." Closer home, in a surprising move not likely influenced by the global trend, Force India’s new Formula One cars for the 2017 season were unveiled… in an arresting Pepto-Bismol hue. 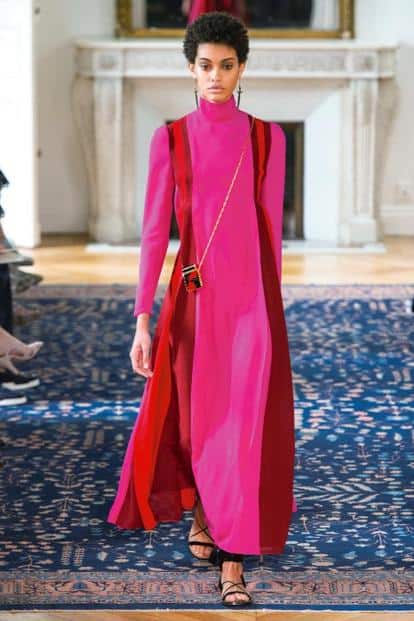 But nothing made as loud and as globally resonant a statement as the Women’s March in January, when pink-knit pussy hats flooded the streets of Washington, Berlin, Paris, Melbourne and beyond in support of women’s rights, LGBTQ rights and racial equality, as well as, of course, in staunch defiance of then freshly inaugurated US President Donald Trump’s blatant misogyny and sexism. The pink pussy hat later found its way on to the head of every model at Missoni’s autumn/winter show in Milan this spring, and temporarily atop the Fearless Girl statue in New York’s financial district, boldly facing down the Wall Street bull.

Los Angeles-based screenwriter Krista Suh, whose brainchild, The Pussyhat Project, led to the viral sartorial movement, told The Atlantic: “Femininity, whether it’s in a man or a woman, is really disrespected in our society. What we’re trying to do with this project is embrace pink, embrace the name ‘pussyhat’, and not run away from that."

And so it was that pink came to be a symbol of power, of resistance, of revolution, while still holding on to its notions of womanhood. It is everything all at once—both a reclaiming of femininity and a disavowal of it.