The poet as mosquito

There is terrific energy in Tishani Doshi's new collection of poetry, 'Girls Are Coming Out of The Woods', giving readers a sensation of being in constant motion

The first Tishani Doshi poem I read was The Day We Went To The Sea. This was about a decade ago, I think. I read the second and third lines twice, perhaps more. I still do the same.

mothers in Madras were mining

the Marina for missing children

Why had she put the alliterative “m" sound in a poem that was showing us the effects of the tsunami? The poem had the body of a verb—it was full of movement, the violence of uncontrollable motion. Thatch flew in the sky, prisoners/ran free, houses danced like danger/in the wind; even the “south Indian sun" had turned into “debris". Things were breaking, falling apart. Life was swaying-swinging. And mothers too—the “m" sounds were perhaps the muttering of fear, of the churn inside erupting into the sound and actions of semi-stammering. Two months ago, I taught Doshi’s Turning Into Men Again at a poetry workshop. This poem, too, had the vertebrae of a verb—like the poem about the tsunami, its title had a verb. Again, like that poem, barring only a couple of lines, every line had a verb in it. What is it about the multitude of verbs in these two poems by Doshi? This is the third stanza:

Where the light shifts from light to dark

To light again, like the body in the first stages of love;

Everything moves in the poem: “returning, waiting, moving, standing, holding, crawl, collapse, search, stepping, calling...". The terrific energy is not just the energy of life condensed into art—it’s akin to the sensation of watching a horse emerge out of a canvas, move, gallop, the lines unable to contain its movement. 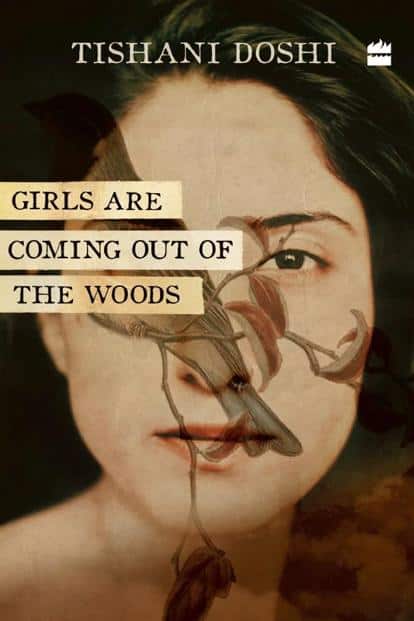 Girls Are Coming Out Of The Woods: By Tishani Doshi, HarperCollins India, 112 pages, ₹399.

That is the sensation of reading Doshi’s poems, in this new collection—notice the verb in its title—and elsewhere. The first poem is addressed to the reader (Contract), and in it Doshi reveals the process of writing. Note, in the first two stanzas below (I cannot quote the rest for constraints of space), the violence of verbs, the transformative energy of the creative process:

I agree to turn my skin inside out,

to reinvent every lost word, to burnish,

to steal, to do what I must

in order to singe your lungs.

I will forgo happiness,

and lower my head into countless ovens.

The violence, of life, of creation, is not the writer’s alone. The reader must be an equal partner: “Don’t kill me, Reader" (Reader).

In poem after poem, the metaphor of ending, or at least a seeming end, appears. The verb in them is of the restlessness of anxiety, the crawl of fear, of apocalypse in instalments. Sometimes it arrives in the first line of a poem, as if it were a statement of fact: “Everyone in the house is dying" (Summer In Madras). The stillness of such a pronouncement will be followed by a different kind of premonition in the next poem, Rain At Three:

Rain at three splits the bed in half,

through a century of hibernation.

Notice how Doshi makes even a sleepy word like “hibernation" wake us up—like the rain does to the sleepers on the bed. In this poem, made gorgeous by the violence of water, the senses are taken to a point of climax—wetness, heavy breathing, both of desire and fear, the smell of bleeding hibiscus, the noise of overflowing, of chaos. The end is always at the bend: ‘This is how desire works:/splintering first, then joining’.

One has barely recovered from this violence when the next poem brings another instalment of the end: There is no end to unknowing (A Fable For The 21st Century). And then a catalogue of verbs, of the nerves of news churning our blood:

spread squares on the floor so puppy

Doshi’s mastery of form and craft is impeccable. This we’ve seen from her earliest published poems. This collection is remarkable for the way it records—and even documents—the metaphors of conditioned violence. Choosing the verb as the spine of this book is, of course, a mark of her poetic intelligence, but what is most endearing about these poems is how Doshi allows the space for grace:

walked among them, knitting sweaters

“Adore stone", Doshi instructs in her poem How To Be Happy In 101 Days, my favourite in this collection. Grace must attend even the most violent situations—this belief is the élan vital of Doshi’s universe. If you’re attacked, spread your legs and say,/ Brother, why are you doing this to me?

This is neither about morality nor beauty but about philosophy—opposites must co-exist, in space and time. Hence the beautiful cohabitation of instinct and memory in these poems, and hence the wonder of the terrible beauty in them: in Fear Management and Everyone Loves A Dead Girl, for instance, the beauty of dying is written about seductively (They discuss methods/of dying because even though there can be no repetition/of that experience ...), and yet life exists, close to the skin of death: If you cannot find happiness in death/you will not complete the course.

There are also poems where the naming power of nouns joins the dots into a narrative of loss. The haunting What The Sea Brought In, for instance, is an assemblage of nouns. I use the word “assemblage" consciously, because Doshi’s poems live on this awareness—that to be alive is to allow oneself to be dismembered, our bodies, our relationships, the things we own, our memories.

of booze. The tip of my brother’s

Slippers of every stripe: rubber, leather,

There is a reason we say we are moved by a work of art. These elegant poems about the wondrous and subterranean career of fear move us in this ancient way, literally and figuratively—It is important for you to lose both/body and mind. Doshi promises to be “an immortal mosquito", “humming in the dungeons" of our “auditory canals", hastening us “towards fury". The hum and the blood, the iterant interaction, the irritation and the resignation—a hundred years after Kafka’s spider, this is the return of the insect: the poet as mosquito. In the difference between the spider and the mosquito is a trajectory of a hundred years of our violent psycho-cultural history: Look for utilitarian values of violence (How To Be Happy In 101 Days).