The pearls of Cygnet Bay

On a trip to the Dampier Peninsula, a writer experiences the making of the Australian South Sea Pearl

A four-seater Cessna lands on a pindan (red soil) airstrip near a narrow dirt road that leads to Cygnet Bay. It is tucked in at the tip of the Dampier Peninsula on Australia’s remote north-western Kimberley coast, where the Great Sandy Desert merges effortlessly with white beaches and the azure waters of the Indian Ocean.

It was here, in 1946, that wheat farmer Dean Brown entered the pearling industry, collecting the world’s largest pearl oysters, Pinctada maxima, for their mother-of-pearl shells. A decade later, his sons, Lyndon and then Bruce, joined him. They began experimenting with farming pearls and established the first all-Australian owned and operated cultured pearling company, Cygnet Bay Pearls.

The company is still leading the way in harvesting some of the largest and finest pearls under a third-generation Brown, James, and welcoming visitors to experience the making of the Australian South Sea Pearl.

The Browns shared their knowledge with the local Aboriginal Bardi and Jawi tribes, who had been living for millennia on the peninsula and the nearby islands of the Buccaneer Archipelago. The Aborigines traditionally collected the mother-of-pearl shell to make a riji, which boys wear as a pubic covering at the time of initiation or formal admission to adulthood. The engravings on the shell symbolized their connection to earth and water. Now, the riji is worn for ceremonial purposes. 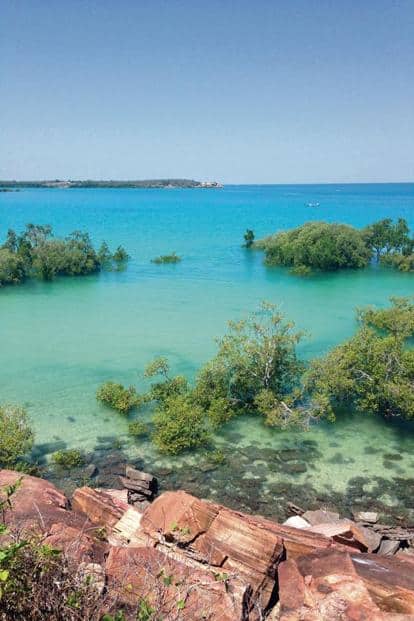 In a pearlers’ shack at the Cygnet Bay Pearl Farm, Aboriginal Bardi artist Bruce Wiggan, whose father Tom Wiggan worked with Dean Brown, is dexterously carving the thick lustrous surface of a mother-of-pearl shell. He then delicately fills the grooves with ochre and resin to highlight the image.

“When I hold a mother-of-pearl shell, I feel like the king of the seas," says the 63-year-old, with a sense of passionate pride. He is a cultural ambassador at the Cygnet Bay Pearl Farm.

The Aborigines who work on the farm have vivid tales of their homeland, where untouched mangroves and tropical estuaries abound; sea and shorebirds, dugongs and turtles, snakes and lizards thrive; and wading birds and humpback whales call in during their annual migration.

Owner and managing director James Brown grew up in Cygnet Bay, spending a lot of time on the beach or the reef, hunting, spearing, fishing, extracting bush honey and plucking bush fruits with local Aboriginal children. He is mindful of the importance of the marine environment to the success of pearling.

“The quality of the pearl is a reflection of how healthy the animal is and the animal’s health is a reflection of the surrounding environment. The Kimberley is now regarded as having the largest tropical tides by volume of water and also the fastest tidal currents in the world. It is no coincidence that Pinctada maxima, which are voracious filter feeders, thrive here in such abundance. These oysters can strip all the plankton out of 150 litres of water every hour, so they would starve in any closed reefs or lagoons," says James, who lives on the farm with his wife and children. He has introduced a Giant Tides tour for visitors to get the feel of some of the world’s biggest tropical tides. An oyster with a pearl inside. Photo: Neena Bhandari

The sun is unrelenting, and there is a peculiar “fishy" smell in the air as I join our guide, Penny Arrow, on the farm tour. Wearing an elegant strand of pearls, she begins explaining how three oysters are required to create one pearl. From a sterile laboratory’s glass window, we watch a skilled technician insert a nucleus from an oyster into a healthy oyster with a small piece of mantle tissue selected from a donor oyster. With time, the mantle tissue that produces nacre (the secretion known as mother-of-pearl) grows completely around the nucleus, forming a pearl sac in which the pearl will grow.

The oysters are then hung in vertical toaster-like racks in the bay. These racks are then hauled on a shallow-bottomed tin runabout used as the cleaning boat and blasted monthly with a high-pressure hose to remove barnacles, weeds, coral growth, etc. After two years, a trained technician makes a small incision into the pearl sac and carefully removes the pearl.

Arrow demonstrates the process to us on an aged oyster. She allows us to feel the pearl inside the translucent sac before making a small incision to extract the pearl. It is like watching the birth of a newborn, pure ecstasy.

An oyster can be reseeded up to three times, and, when it reaches the end of its reproductive life, it is harvested for the mother-of-pearl shell used in jewellery and inlay for furniture; and the small quantity of pearl meat, which has a delicate flavour and texture.

We are given a quick lesson on the subtleties that determine a pearl’s grade and value. As a pearl is created by a living mollusc, nature alone decides its shape, size, colour, surface and lustre.

Australia is the only pearling nation in the world that uses wild oyster stocks to produce cultured pearls. The wild oyster is collected from the 220km-long Eighty Mile Beach along the Kimberley, where the Pinctada maxima breeds naturally in huge numbers. The area is regulated under the department of fisheries and the oyster collection is managed through a quota system.

Getting there: Air India flies direct to Sydney and Melbourne from Delhi. Qantas and Virgin Australia fly to Broome, which is 220km, or about a 3-hour drive on a partial dirt road from Cygnet Bay.

In May, SilkAir will link Singapore directly to Broome in a short 4-hour flight. The farm can also arrange small plane tours with partner airlines from Broome.

Accommodation: There are heritage pearlers’ cottages, a master pearler cottage, safari tents with en suites, and a secluded homestead.

Dining: Visitors can dine at the on-site restaurant, which has pearl meat on the menu.