The otherizing of Muslims in India has been a long-term project. Mob violence, and the lack of justice and social equity, often sets in motion a chain of events that only serve to perpetuate the worst stereotypes, leading to ghettoization and a dangerous alienation among young Muslims.

This is the theme on which the renowned Gujarati writer Ila Arab Mehta’s Fence, now out in English, constructs its narrative. The novel opens with readers being introduced to a young and independent Fateema Lokhandwala. She is a teacher in Ahmedabad, and is keeping an eye out for new housing projects. She dreams of buying an apartment although she is Muslim and single, and therefore often turned away even if she can afford it.

However, Fateema is nothing if not determined. Her childhood would have defeated another person. Her mother, Khatijabi, and father, Maajidbhai, were poor but set on educating their children. Maajidbhai deals in scrap iron, wandering from village to village, and barely manages to feed his family. The children attend a Navprabhat Trust school and Fateema, who is particularly bright and hard-working, is top of her class. Her teachers are supportive and help her find scholarships. They even help her escape a marital alliance that her family is pressured into accepting.

Fateema herself is irrepressible. But her happy outlook cannot dim her awareness. She helps tutor her best friend, Chandan, which leads to an early brush with exploitation. Instead of being paid and treated respectfully, as a tutor should be, she is kept at the threshold and offered two puffed-rice laddoos by way of thanks. 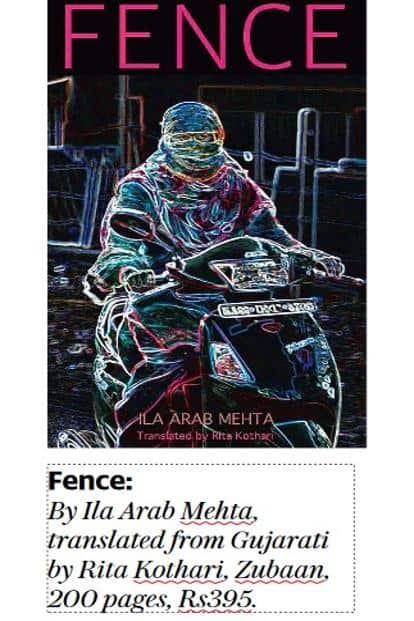 One of the most moving episodes in the book describes a lavish feast hosted by Chandan’s family. Many of her schoolmates are invited. Not Muslims though. Chandan smuggles her in. Seeing the mass of food, however, Fateema cannot bring herself to eat. All she can think of is how to stow some in her clothes so she can go home and feed her family. Her grief and guilt very nearly cause her downfall.

Her younger brother drops out of school. But the older son, Kareem, has been a bright scholar who has gone to college in Ahmedabad. Fateema follows suit but once she shows up, she finds a very different brother waiting for her.

Forced to depend on religious institutions for shelter and some small earnings, he has turned orthodox. He no longer supports Fateema’s education and tries to bully her into wearing a burqa. He is in the company of the mysterious Anwar, and they are nursing many secrets. Living in a women’s hostel, Fateema contends with these fresh problems, including a roommate who is interested only in movies and romance. She herself is drawn to Anwar and is all but destroyed through association with him.

The author’s narrative style is forthright and the storytelling proceeds at a brisk pace. Through the challenges and triumphs of one Gujarati family, Mehta weaves in several painful strands that make up the lives of young Muslims in contemporary India: the problem of finding decent housing and jobs, the pitfalls of seeking help via religious institutions, and the mysterious funds that are easily available to extremist groups but not to students keen on mainstream education. She highlights the hard work and courage of women like Khatijabi who are illiterate themselves but fight for their daughters’ dreams.

One false note is the “love jihad" track. The author seems to have gone along with the right-wing argument that Muslim boys entrap Hindu girls with the sole agenda of converting them and stuffing them into the nearest burqa. There is little investigation of sexual desire. Another blind spot is the novel’s assumption that the main problem afflicting local boys is “outside" influence and cash. The shadowy Anwar is not Gujarati. His character allows the reader to skip the real-life chapter on the causes of heartbreak among young Muslims and the loss of faith in institutions. These causes are firmly rooted within the state, within the nation.

Ultimately, the author paints a more positive picture than real-life reports suggest. The solidarity of village communities has been eroded. A vicious campaign of discrimination could break the iron spirit of the smartest girl. Even so, the novel is uplifting in that it holds up a torch for education, especially the insights gained through history and literature. It is an argument for not letting anger and grief get the better of us, and to go on arguing, go on dreaming as Fateema Lokhandwala does.