The oligarchy that is men’s tennis

By the time the French Open begins on 28 May, the Big Five will all be over 30. But they show no signs of slackening their grip over the game

By the time the French Open begins on 28 May, the top five men in the world of tennis will all be at least 30 years of age. In a sport that is defined by the energy, stamina and brashness of youth, these five stand head and shoulders above the competition. And there is little to show that their stranglehold on the four biggest tournaments (known as the majors or the Grand Slams) will be broken anytime soon.

After all, since Roger Federer won his first Wimbledon in 2003, the big five have won every Grand Slam but five—Federer (18), Rafael Nadal (14), Novak Djokovic (12), and Andy Murray and Stan Wawrinka (three each). And the remaining five were won by five different men. That’s 50 of 55 titles taken by just five players—and, remember, Murray’s and Wawrinka’s titles only go back the last five years.

This analysis could quite easily create a top 3 in the tennis hierarchy by lumping Murray and Wawrinka with the rest of the men. But their standing in the game today makes a strong case for a Big Five. 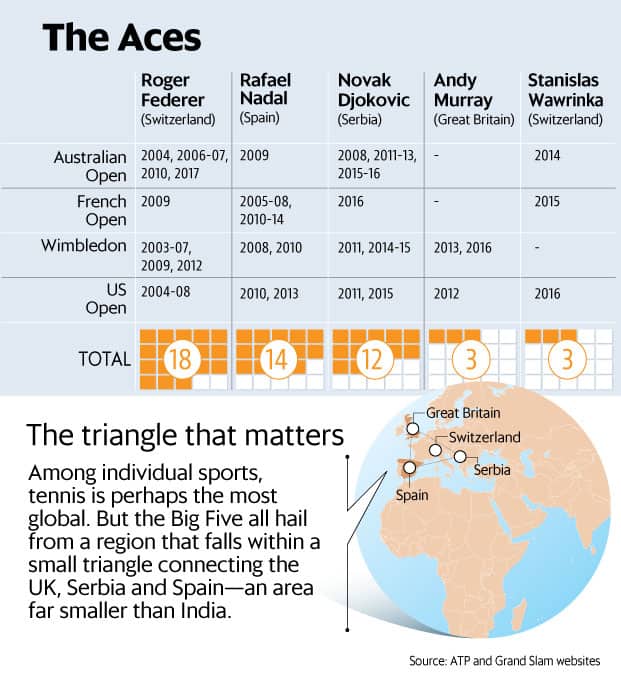 After all, Murray dethroned Djokovic from the top ranking months after the latter became the first man since Australian Rod Laver in 1969 to hold all four majors (the Australian, French, Wimbledon and US Opens) at the same time. Wawrinka has a perfect 3-0 record in Grand Slam finals—each win against the then No.1 player in the world. And at age 32, he is holding firm as the top-ranked Swiss player even as compatriot Federer continues with his second coming, further bolstering the case for a Big Five instead of the Big Four that tennis pundits have been writing about for around a decade.

This is an oligarchy.

A party of five

What makes it even more fascinating is that there have been few—one might even say no—challengers to the throne. Only one of the five one-time Grand Slam winners has come close to another major title. But Andy Roddick, the 2003 US Open winner, lost to Federer in the four other finals he reached (Wimbledon 2004, 2005 and 2009, and US Open 2006). The other one-time Grand Slam winners—Gaston Gaudio, Marat Safin, Juan Martin del Potro and Marin Cilic—never made it to a singles final again (though Safin had reached one previously).

A tennis fan would be hard-pressed to find another “great" player other than the Big Five since the 2003 Wimbledon. Even Robin Söderling’s wins over Nadal and Federer in consecutive French Opens (2009, 2010) are no more than a footnote in tennis history—when Nadal lost to the Swede in the round of 16 in 2009, Federer went on to win his maiden French Open title, and Nadal reclaimed his crown on the red clay a year later, after Söderling defeated the Swiss master in the quarter-finals.

Three of the Big Five have completed a career Grand Slam—winning all the four majors at least once. In the open era, only two other men had previously managed to do this

Only 24 men have reached the finals of the last 55 Grand Slams. Of these, 33 finals have been contests exclusively between the Big Five—all of them since the French Open in 2006; that’s 33 out of the last 44.

Only 10 men have won these titles and the Big Five players are the only ones to have won more than one.

When numbers are considered in such abundance, a discussion on the quality of the players could easily take second place. Nevertheless, the simplest measure of quality is a player’s ability on different courts—the hard courts of Australia and the US, the red clay of France and the grass of Wimbledon.

Three of the Big Five have completed a career Grand Slam—winning all the four majors at least once. In the open era (starting 1968), only two other men had previously managed to do this.

Rod Laver was the first, winning all four majors in 1969. He didn’t, however, win on all three surfaces as the Australian and US Opens were then played on grass.

Andre Agassi (with eight Grand Slam titles), who played in the statistical shadow of fellow American Pete Sampras (14 majors) through the 1990s and early 2000s, was the second man to win all four Slams, and the first to do so on all three surfaces.

When Federer won the French Open in 2009, he became the second man after Agassi to have won all the Grand Slams at least once, and on all three surfaces. Nadal then joined Agassi and Federer after his first US Open title in 2010. Djokovic joined this career-Slam-over-all-three-surfaces club last year after his maiden French Open title.

On Monday, Federer, who has lost only one of the 20 matches he has played this year, announced on his website that he will stay away from competing on clay this year and will instead prepare for the grass- and hard-court events that follow. That leaves Nadal, age 30, the overwhelming favourite to win his 10th French Open title.

Two men right now seem to have the game to dethrone the Big Five at some point. While 22-year-old Australian Nick Kyrgios’ otherwise brilliant skills have been overshadowed by his temper tantrums and other controversies, Germany’s Alexander Zverev showed in January what he’s capable of when he pushed Nadal to five sets in the third round of the Australian Open at age 19.

But it is always premature to make such pronouncements.

Names have been dropped before—Tomáš Berdych, Milos Raonic, Grigor Dimitrov—but not one of them has inched closer to the Big Five since their potential was first marked.

Precocious talent matters little when the five grand old men of tennis aren’t giving anyone else a chance.