The ‘Mercedes Benz’ among cows

Owning a cow in India must sound like the easiest thing, until you read this hilarious new book 'The Cows Of Bangalore: And How I Came To Own One'. Edited excerpts

Chitradurga district is six hours from Bangalore. I am here because my brother-in-law, Krishnan, has an interest in geology. He has brought a metal detector from Florida to hunt for ancient coins in the forts that dot this area. I am accompanying him to scout out, not ancient coins, but the Amrit Mahal cow.

Amrit Mahal was a military breed of cow. Tipu Sultan used these fierce, strong animals to carry heavy military equipment during the war against the British. A note from a British commissioner says: ‘They are active, fiery, and walk faster than the troops; in a word, they seem to constitute a distinct species, and to possess the same superiority over other bullocks in every valuable quality that Arabs do over other horses.’

The note also shares another remark by a Professor Wallace in 1889: ‘The breed as a whole occupies amongst cattle a position for form, temper and endurance strongly analogous to a thoroughbred among horses.’

Farmers, however, have a simpler way of signifying the importance of this species. They say that it is like a ‘Mercedes Benz car’ for them, says environmental researcher, Jahnavi Pai. Or they call these animals ‘Devaru dhana’ which means god’s gift.

The Mysore Maharajahs patronized these animals, donating vast tracts of dry grassland for a ‘trans-human’ system of grazing; the cows were owned by farmers but tended to by nomadic herdsmen who moved the herd from grazing pasture to pasture. They ate specific grasses for specific seasons. As we get closer to Chitradurga, we see our first cowherd. He is crossing the highway with what looks like 200 cows. Our driver screeches to a halt on the side of the highway. I run out and chase the herd of cows. Four turban-clad men are herding the animals. They walk all day in search of grazing pastures and spend the night at different spots. The man carries a stick and a stainless steel vessel for food.

Such nomadic pastoralists are still common in rural India. They herd the animals across a variety of grasslands and sometimes across state lines. In 1947, when India became independent, Karnataka used to have 400,000 ‘Amrit Mahal Kavals’ or grasslands devoted to grazing cattle, with first right of feeding given to the Amrit Mahal cows. Now, it has 60,000 acres as per official record, but around 37,000 acres in reality. Vast tracts of land have been allocated to the department of defense which uses it to test bombs, something that activists are protesting. Today, Amrit Mahal cows are staring at extinction.

To watch a herd of Amrit Mahal cows is a stirring sight. These animals have an economy of movement and unassailable dignity. I ask the cowherds in my broken Kannada if they have ever brought the herd to Bangalore—they move across the state after all.

The man laughs. ‘Bringing these animals to Bangalore would be like cooping a giant in a cage.’

It is late when my brother-in-law and I drive back to Bangalore. We have found ancient coins and had a cow-sighting. All said and done, a satisfactory trip by every means.

My neighbour, Sumi, calls me. ‘We have a surplus of vegetable and fruit peels. Will your milk woman take them for her cows?’

‘Meet me at the composting area,’ says Sumi.

We have started composting in our building. The problem is that since it is hot, people have started throwing out what Sumi calls ‘good’ melons and cabbages. We have seventy apartments in our building and Sumi monitors them all. She knows which house is mixing the odd plastic cover with the organic waste, which house isn’t separating paper and plastic properly and what proportion of the organic discards are ‘perfectly usable fruits and vegetables’.

‘Look at this,’ says Sumi irately, standing arms akimbo over buckets full of household waste. ‘Look at that cabbage. It has just one black spot on it and someone has thrown it out. Look at those melons. There is just one area where they’ve gone soft. Why don’t we give it to those cows?’

We decide to take action right away. The housekeeping staff puts all the usable fruits, vegetables and juicy watermelon peels into a large brown bucket. Sumi and I carry two plastic buckets outside to look for a stray hungry cow.

‘There is one that usually lies right in front of our apartment building,’ I say.

And there it is.

We accost the cow—that is sitting on the pavement—with two buckets full of vegetables. The surprised cow pushes itself up and relieves itself promptly. We run to the other side. After a few minutes, when the cow and I have calmed down, I ceremoniously place the bucket in front. The animal immediately begins to nuzzle at the vegetables and takes a slow bite. It is thin with ribs sticking out. Sumi and I watch the cow with satisfaction. Pretty soon, we think, it will devour the vegetables in both the buckets. It will become a healthy happy cow with meat on its bones and gratitude in its eyes. Instead, the cow starts to tire after eating half the bucket. Maybe it is not used to so many vegetables; maybe it prefers hay and grass; maybe its stomach has shrunk to a size zero, given how thin it is.

‘We have to scale it up slowly,’ I tell Sumi. ‘One cow cannot eat so many watermelon peels and cabbage in one shot. It is like giving a dieter a bucket full of chocolate.’

‘Ask your milk lady to come and take this organic waste every day. She can distribute it amongst her cows.’

I ask Sarala who agrees with alacrity. There is only one problem and I already know what it is. Naidu (her husband) herds the cows. He walks beside them, pushing a bicycle in one hand and placing a hand on the cow with the other. The morning milking runs on a clock. Taking time off to come into our building complex and pick up buckets of trash will set them back. Sarala asks if I can bring the buckets out when I come to buy milk.

‘Your building doesn’t allow cows inside,’ she accuses. ‘Otherwise, we could just bring the cows in and eat up all your kitchen waste.’

Sumi and I consider buying two desi cows, just for our building. We get excited by the idea for a while but know that our building committee won’t approve of it.

‘The problem is that the cows will moo,’ says Sumi. ‘Then the ground floor people will complain. And then there is the question of the cow dung.’

‘We can use it for compost for our garden,’ I reply.

‘Let us move into a bungalow with a few families,’ says Sumi with a dreamy look in her eyes. ‘We’ll buy some cows and plant an organic garden.’

We continue feeding the cow that shows up outside our gate each morning. Over time, its appetite grows. After a month, it eats a bucket of watermelon peels—no problem. I watch to see if its girth improves, if it gains weight, but that doesn’t seem to be happening.

‘Our building cow isn’t gaining weight, Sarala,’ I tell her one morning.

‘It is a big animal, don’t worry. Gaining weight takes time. It has four stomachs, not one or two. For food to go into all those four stomachs and then enter the muscles takes time.’

‘Her appetite has increased though. Yesterday, she ate a full bucket of fruit peels. She looks happy.’

‘Of course, it will be happy, Ma. Chilled watermelon peels are like ice cream for the cows. Particularly in this heat.’

Over time, our building cow slowly gains weight. We ask around for an old plastic laundry basket and put the organic waste into it. Our security guards keep track of the cow’s basket to make sure no one steals it. Every morning, Muniamma, one of the housekeepers, washes and refills the laundry basket with leftover food and takes it out.

Our cow grows from a size zero to a size two at least. 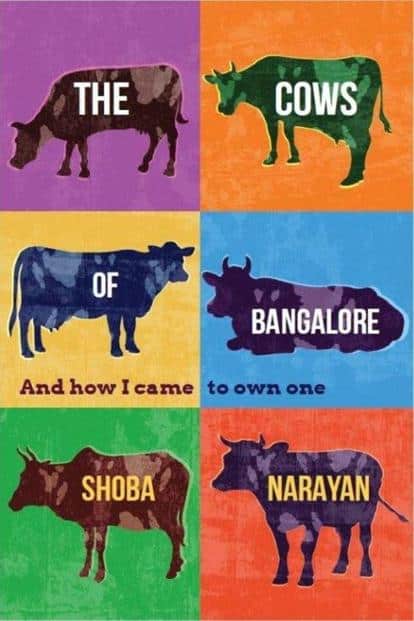 Excerpted with permission from Simon & Schuster India. The Cows Of Bangalore: And How I Came To Own One will be available in retail and physical stores from 6 March.