The many worlds and wonders of Indian history

In a new book, Romila Thapar takes us on a journey of Indian historiography over the last 50 years, attempting to interpret events spanning at least 5,000 years

Human beings live not just in time, but in history. History is an account of the events of the past, but it amounts to much more than that, for it is also a theory of cause and effect, a source of identity and consolation, a narrative that includes some and excludes others. History not only influences the present, it is also influenced by it: We go to history in search of answers to questions that are of importance to us now. History may have taken place, but it is never finished: It remains a dynamic entity, capable (like memory) of generating new meanings.

These and many more ideas about the nature of history pop up in Talking History, a freewheeling book-length conversation about the practice—as also the politics—of history with Romila Thapar. Thapar is the doyenne of Indian historians, someone who has lived and worked in two centuries and taken readers into the India of many more, from the world of the Indus Valley civilization to that of the Ramayan, that of Ashoka to the medieval Kashmiri historian Kalhana.

Even at 86, she is still very much a vivid and forceful presence on the Indian intellectual scene—not least because of the ascent in recent years of the Hindutva school of history and its votaries, whose keenness to dismiss her outright as “anti-Hindu" and a “Marxist" is grudging acknowledgement of Thapar’s stature. Her co-discussants here are the Iranian philosopher Ramin Jahanbegloo (now virtually an honorary Indian after having produced several such book-length dialogues on themes in Indian life with other intellectuals) and the historian Neeladri Bhattacharya.

Here is a book to initiate any lay reader into the subtleties and difficulties of the historian’s craft. Although it is not Thapar’s aim to say that history is best understood only by historians, she does want us to appreciate that history is hard: not an open plain, but a dense forest. Finding one’s way around the terrain of history is not easy, and much depends on the intellectual resources, scepticism, imagination and even self-restraint we bring to the quest. 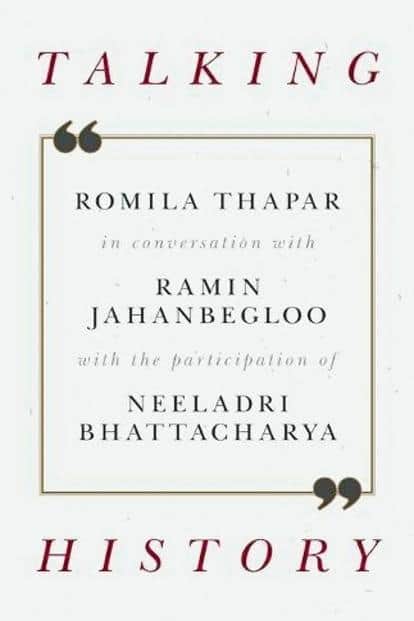 And just as everything—tea or coffee, monarchy or slavery, a word or a world view—has a history, so, Thapar reminds us, does the writing of history itself. The study of history-writing is called historiography, and from it we see that there can be many ways of thinking about the past, some compatible with one another and some not. The Ramayan may have much to tell us about ancient India, but in its literal form it is not admissible as history, even if some people think of it as such.

Over 300 pages, Thapar takes us on a journey through Indian historiography over the last 50 years as it has attempted to interpret themes and events that take place over a span of at least 5,000 years. These are questions of great import over which much ink—and sometimes blood—continue to be spilt. Is it true that Indians lack a sense of historical consciousness, as claimed by writers on India across a whole millennium, from Alberuni to James Mill? (“Contesting this," says Thapar, “has been my lifetime project.") Was the defining historical event of ancient India an invasion, or waves of migration, from the north-west, of the Indo-European peoples that we now call the Aryans? Or, as some writers today would have us believe, were the Aryans indigenous to India and migrants out of India to the West? What kinds of linguistic, archaeological and literary evidence are admissible in the court of these debates, and must the historian ask different types of questions of each kind of source?

Some of the best pages in the book are those in which Thapar shows how history, even when not motivated by any overt ideological agenda, gradually becomes aware of its own biases and develops new eyes and ears for the past. For instance, since so much of what we know about the past comes from textual evidence, elite groups that had control over the writing of those texts come to dominate our view of the past. The default version of Hinduism we project on to the distant Indian past, therefore, becomes text-based Sanskritic Hinduism. The actual practice of what we today call Hinduism may have been much more variegated and idiosyncratic, the product of little and local histories that time has rubbed away.

Nor are details of material culture in texts always set up with factual accuracy as their primary aim: The descriptions of vast wealth and splendour of the imperial court and capital in the Ramayan, for instance, may have behind them the literary impulse of inciting wonder and awe in the reader. Similarly, it’s easier to write the histories of settled societies than those made up of nomads, to trace a broad narrative of unification and consensus rather than the smaller ones of resistance and heterodoxy, to project modern religious and political categories and motivations upon the past rather than face up to its strangeness. “We should not forget," says Thapar, “that there is always a part of history which is forgotten."

And what of the future of Indian history? The arrival of the nation state in the 18th century, Thapar reminds us, led everywhere in the world—whether the nations of Europe or the later decolonization struggles of Asia and Africa—to the gradual reinterpretation of the past through a nationalist frame. Although it was finally riven by a Hindu-Muslim divide that became the basis of a “two-nation theory", Indian anti-colonial nationalism was an inclusive ideology that did not see Indianness as anchored in a particular religion or language.

Indian historians aimed to recover the marginalized histories of women and Dalits, peasants and artisans, traders and travellers, even non-human histories focused on ecology or geography-

This led, at independence, to the ambitious construction in the new nation state of India of a new platform for Indian history, one that sought to draw a line around the violence and iniquity of the past and endowed all those who lived within the boundaries of India with the same rights and freedoms.

The secular and democratic leanings of this new order (as also trends in the wider world of historiography) greatly affected, Thapar explains, the aims and aspirations of Indian historiography. Indian historians aimed to recover the marginalized histories of women and Dalits, peasants and artisans, traders and travellers—even non-human histories focused on ecology or geography.

Indian history became richer, more textured, more clamorous. But its political implications and reluctance to endorse a grand narrative were vigorously contested by Hindu nationalism, with its emphasis on religion as the main constituent of Indian identity across the millennia and Vedic Hinduism as the starting point of Indian history (thus the desire to prove that the Aryans were actually native to India). As Hindutva has gained political strength, so too it has attempted to reclaim Indian history for itself—paradoxically often using concepts and formulations, Thapar reminds us, first proposed by British colonialism.

It would not be excessive to say there is a civil war raging in India today—only it is being fought on the ground of Indian history. What we make of our history today will be a great influence on the history that we ourselves make.

Chandrahas Choudhury is the author of the forthcoming novel Clouds (Simon & Schuster, January).