The luxury market before and after Lehman

The industry that withstood the challenge of the global economic crisis the longest was probably luxury retail. Four industry experts tell Lounge how the Indian market has fared in the last decade

The one sector that withstood the challenge of the global economic crisis the longest was luxury: “private jets, diamonds, art, antiques, Rolls-Royces and even Savile Row suits are still selling", ‘The Telegraph’ reported in October 2008. Damien Hirst sold his work at Sotheby’s for £111 million on the day Lehman Brothers filed for bankruptcy. Art auctions didn’t reschedule their calenders. In a bid to be more visible, luxury brands kept splurging, in denial. But as reality sank in, European brands started a “look-East policy", shifting focus towards China and then India. Four industry experts tell Lounge how the Indian luxury market has fared in the last decade

‘Brands know the contradictions in India’

The world wasn’t ready for the contagion effect that followed the collapse of the Lehman Brothers. And then there were terrorist attacks on Mumbai in 2008. I think the second event impacted the local business more. There was also a third thing happening simultaneously—the country was getting its first luxury mall, DLF Emporio, in Delhi.

Till then, most luxury brands used to sell from five-star hotels and the Mumbai attacks forced them to think of moving to a luxury retail environment. With Emporio’s launch, a lot of new brands came to India—Georgio Armani, Fendi, Burberry, etc. Also, Indian designers found a cohabitation. And the market felt the effects.

By 2010, brands had written off India as a luxury market, instead focusing on China. But then growth in China started slowing and brands woke up to India. Things were getting better when the regulations in 2016 making PAN mandatory for transactions above ₹ 2 lakh hit the industry.

But after all of it has settled down, the Indian luxury retail market today is on a better footing than it was in 2007. Attraction for India is better. Brands have been here and understand the contradictions of the market. They have understood that in Asia, India is the next big market but they have to build the relationship with the customer here.

‘The crisis made brands look at India optimistically’

India, being a savers’ economy, wasn’t impacted nearly as much as other countries in Europe. Having said that, when DLF Emporio was launched in August 2008, there was peak recession worldwide. But we had got partners on board, so execution-wise it was smooth.

Earlier, luxury brands existed only in five-star hotels. Emporio catalysed organized luxury retail in India. It was a new concept and, therefore, our plan was always to wait and watch. Even without the crash, our next project would have taken time. That is why it took us nine years to open our second luxury mall, The Chanakya in Delhi, last year.

But yes, the financial crisis made brands look at India in a very optimistic way. With both the West and the East in turmoil, India emerged as a steady growth market. It wasn’t an exponential growth market like China, but the fundamentals were great.

I joined DLF in 2010 but I am aware that DLF partnered with a few brands to bring them to India. This time around when I went to introduce our new luxury venture to the brands, they were extremely open and happy about India as a market. The global luxury brands are now aware of India, the luxury market here and the steady growth it offers. 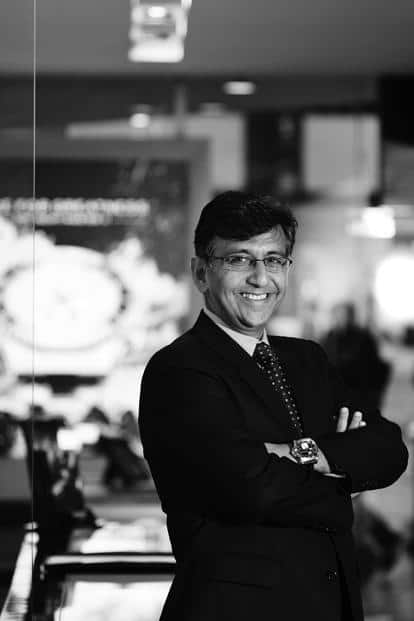 The impact of the collapse of Lehman Brothers on luxury watches was in line with its effects on other consumer retail businesses. The worst hit was the aspirational, or entry-level, category. But it was a small part of the business.

To put it into perspective, demonetization and other regulations—imposition of GST, mandatory listing of PAN for any purchase above ₹ 2 lakh—brought into effect in 2016-17 affected the luxury industry more.

Brands were very enthusiastic about India around 2005-06. Growth was robust, similar to what happened in China 1998 onwards. They believed India was the next China. But the economic crisis and infrastructural problems made them realize that that wasn’t the case. The 2008 crash was followed by a transition in the market where premium luxury started getting more traction. It was derailed by the demonetization drive but, finally, I think we are back to pre-2015 level growth.

‘India emerged as a consumer market’

From the gems and jewellery perspective, there are two sides of the coin: The first is the export business that got severely hit because the North American markets were in a shambles. But the local consumption in India, which is the other side of the coin, didn’t get affected at all.

But looking at how closely the world is connected today, if something similar happened today, the impact would be completely different.

Nine out of 10 diamonds come to India at one stage or the other during the production cycle. And even today, almost half the diamonds in the world are consumed in the US. So there was a huge impact on the manufacturing part of the business. Lots of firms had to cut down production. But domestic consumption stayed bullish, which made Indian manufacturers take notice.

Exporters started expanding to markets other than North America and many large-scale cutting and polishing companies started looking at India as a consumer market.

As told to Pradip Kumar Saha.