The difficulty of being Raj Rewal

Raj Rewal speaks so softly and gently, his voice verging almost on a whisper, that you run the risk of sounding rude—especially if you’re asking questions. As I sit down in his Delhi office, he asks if I am interested in architecture. Yes, I reply. This surprises him somewhat. “I’m so happy," he says. “If journalists like you are interested, that’s good for the profession, good for architects, good for everybody." Later on, he almost includes journalists among the “architecturally illiterate". But for now, one of India’s most important architects nods, “Let’s start."

Along with Charles Correa, Balkrishna Doshi and Achyut Kanvinde, Rewal belongs to the first generation of post-independence architects. He was born in Hoshiarpur, Punjab, in 1934 and studied architecture in Delhi and London, returning to India in 1962, via the offices of French architect Michel Ecochard in Paris, to set up his own practice. In a career spanning more than half a century, Rewal, 83, has designed low-cost housing, educational and research institutes, a library, private homes, museums, a Games village, an embassy, and office buildings.

Earlier this year, Rewal became the first Indian architect to have his drawings and models accepted into the permanent collection of New York’s Museum of Modern Art (MoMA). The architecture and design department at MoMA, established in 1932, is the world’s first curated collection of modern architecture and includes significant holdings of some of the most important modernist architects: Frank Lloyd Wright, Louis Kahn, Le Corbusier, Ludwig Mies van der Rohe. The museum has acquired Rewal’s models of the Hall of Nations (the building itself was demolished in April 2017 to make way for a swanky convention centre), the Asian Games Village, the French embassy staff quarters and the Parliament Library in Delhi. Apart from models, the acquisition includes sketches, drawings and photographs.

Martino Stierli, the Philip Johnson chief curator of architecture and design at MoMA, thinks Indian modernist architecture has been overlooked for far too long. “Till now, MoMA has very narrowly focused on modernism in North America and Western Europe," says Stierli on the phone. MoMA’s attempt is now to get a more balanced reading of modernism, and Rewal’s materials will be displayed in a planned exhibition on South Asian architecture in 2020-21. “The architectural legacy of post-independence India is extraordinary and has not been acknowledged enough on the world stage so far," says Stierli. “We want to draw the attention of the world audience to the endangered nature of much of the modernist legacy in India." They intend to acquire more material from other key figures like Doshi, who won the Pritzker prize, architecture's highest accolade, in March.

In another country, Rewal, whose buildings helped define the architectural aspirations of a new nation, would be celebrated as a national treasure. Here, his Hall of Nations (structurally engineered by Mahendra Raj and one of the iconic buildings of modern India) was bulldozed overnight, ignoring the plea against its demolition that was in court.

Rewal has likened the act to the destruction of the Bamiyan Buddhas in Afghanistan by the Taliban. He tries to explain the ingrained apathy towards architecture. “There are two ways to look at this," he says. “That they are ignorant. Or they want to destroy the Nehruvian legacy—it’s an ideological thing." He ends with a highly charged, “You can quote me on that!"

The current state of architecture in India doesn’t inspire much hope in him either. The decline of Indian architecture began, he says, when architecture competitions stopped being judged solely on merit. Governments very often give projects to those who quote the lowest fee. Another ill-thought stipulation for some competitions, he says, is that an architect has to have earned a certain amount in the past year to even qualify to enter a competition. “It is absurd," he says. “It is completely absurd—it instantly eliminates all emerging talent." There is no way, he says, that those entering the field are going to be earning, say, Rs2, 3 or 5 crore in their early years. He also believes the jury should mostly comprise “our peers, with a few serious connoisseurs and academics and not a crowd". And the competitions should be completely anonymous.

“See, the Indian establishment is based on lawyers, economists, political families, journalists...," he pauses. He reconsiders the list and starts laughing. “Hmm, okay, let’s leave the journalists out," he says. “Most of them are architecturally illiterate and philistines." There was a time, he says, 30 or 40 years ago, when people like Pupul Jayakar had a sense of arts and culture. He believes today there is nobody in the political field who cares about architecture.

For all their pioneering work, Indian architects have remained largely unnoticed on the world stage. “I would say partly it’s because we are poor and don’t have the marketing ability or the financial clout of the developed nations," says Rewal. “It’s nothing compared to, let’s say, Japanese architects whose works are so well known and are shown everywhere." Stierli adds a positive note. “Our interest in India is definitely an attempt to get a more balanced reading of what modernism was," he says. “And how it contributes to the mainstream narrative of modernism."

Rewal’s own modernism takes heed of traditional Indian architecture—that of cities like Fatehpur Sikri and Jaisalmer. “They were both innovative and creative in solving problems." In a multi-ethnic, multicultural nation, with an unforgiving and varied climate, India is a tough place to practise architecture. “Our problems are so acute that it’s simply wonderful to be able to try and solve them," he says. “I mean, we did the Hall of Nations. We made a building which is the largest space-frame structure in concrete in the world. We did it with very little means, with thousands of very poor people working at the site," he says. “I mean, we could do that. Given the chance, we have wonderful potential and there is tremendous talent in the country."

Throughout our conversation, Rewal repeatedly returns to the Hall of Nations, sometimes from subjects and buildings far away. The MoMA recognition perhaps grants the whole affair some poetic justice. “We architects are lonely creatures," says Rewal. “And it’s always good when someone wants to highlight this form."

As if with stoic dignity, the Hall of Nations page on Rewal’s website gives no indication of the tragedy that befell it. Instead, with a jab of dark humour, its present-tense description ends with: “The main pavilion of the Hall of Nations has a clear span of 78 metres and a height varying from three metres to 21 metres, thereby providing a vast capacity for items to be exhibited, from books to bulldozers." 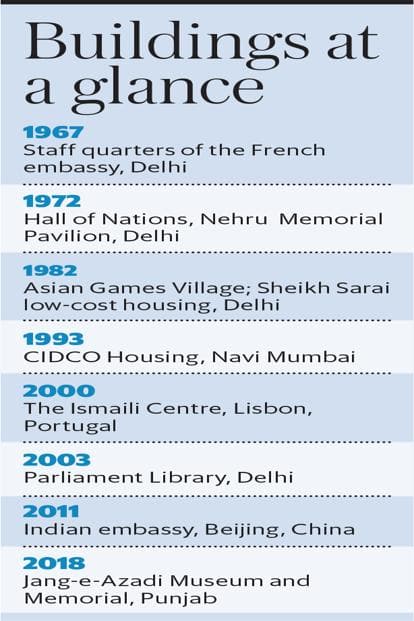