The delicate poetry of ordinary life

Like R.K. Narayan's Malgudi, Manu Bhattathiri's first novel takes an amusing look at the life of a community in a small town in south India

Manu Bhattathiri’s first novel, The Town That Laughed, evokes the time-worn literary device of weaving a fictional narrative through the diverse spaces and assortment of characters in a small town. Sundara Ramaswamy’s landmark Tamil novel Oru Puliyamarathin Kathai is a remarkable portrait of Nagercoil, a town near the southernmost tip of peninsular India, in the first decade after independence. In English, we have R.K. Narayan’s finely imagined small town, Malgudi. The small-town novel offers an ideal canvas to explore certain dimensions of collective existence—sociology, culture and politics—while at the same time charting the destinies of individual characters.

The Town That Laughed fits right into this genre, but with a greater focus on the psychology of individuals. This story of Karuthupuzha, a town by a river of the same name, travels through many typical sites: apart from private residences, it takes in the riverbank, bus stand, tea stall, police station, toddy shop, photo studio, market street, barber shop, primary school, orchards and the myriad pathways that inter-link these locations. But the main narrative is so intensely focused on people that the town doesn’t seem to have a story of its own.

Instead, the town lends the larger story two egregious traits: its tendency to exploit and punish the weak-willed, and its penchant for “collective, mindless, vindictiveness". It is said that staying in the same place for too long makes one mean, as a way of explaining the sporadic meanness of the inhabitants of a small town. In the novel, this quality is central to the story, which explores the effects of such cruelty on the destinies of two unfortunate men who are quite different from each other.

The first is Paachu Yemaan, a just-retired inspector of police who is traumatized by the loss of power and status, not to mention the sudden onset of inactivity that routinely follows superannuation. The situation is made worse by the fact that during his working life, Paachu had freely abused his power, terrorized petty criminals and generally lorded it over his fellow citizens of Karuthupuzha. Now, in order to recover the glory of his former self, Paachu takes certain steps within his own household that can only be described as foolish, like putting on his now-defunct uniform every morning before visiting the latrine or giving vent to the fantasy that his little niece, still in primary school, will also grow up to become an all-powerful police inspector. The traditional privilege and authority accorded to him as the male head of the house, comprising his sweet-natured wife Sharada and niece Priya, protects Paachu from well-earned ridicule. He is not so fortunate when he tries to meddle in the affairs of the police station. Not only is he rebuffed, but he’s also made the butt of endless jokes by the incumbent inspector Janardhanan and a few of his subordinates, who don’t feel like they owe Paachu any loyalty for past favours. Janardhanan is especially offended by Paachu’s expectation that he be allowed use of the police jeep for running household errands. Soon the whole town is laughing at Paachu.

The other victim of the town’s mean streak is Joby, the odd-job man turned incurable alcoholic. From the ranks of the working class poor, Joby has spent his youth looking vainly for his place in the world, and a few careless mistakes have launched him on the painfully erratic trajectory of a whole-time drunk. His quest for love, clouded by a haze of alcohol, turns out to be a non-starter. His passion for Saraswati, a teacher, is furiously imagined but fails to actualize even to a small degree. His fortuitous marriage to the orphan Rosykutty, an enigmatically silent woman of hidden strengths, also turns out to be a failure, because Joby is too damaged in the head to even conceive of being a good husband. As a result, Joby becomes a self-loathing regular at the toddy shop, reduced to entertaining fellow tipplers with incoherent tales from his despicable life.

Bhattathiri affords us a close look at the minds and hearts of both characters in what can only be called portraits in fractured masculinity. His description of the two men is sharp, subtle and authentic, lending an air of credibility and coherence to the absurd turns of their evidently deluded minds. The supporting cast of characters—Sharada and Priya, Rosykutty, Janardhanan, Bumru and other policemen, barber Sureshan with a heart of gold, the villainous Varky and the ever-maladroit antique-dealer Paciera—is finely drawn as well. 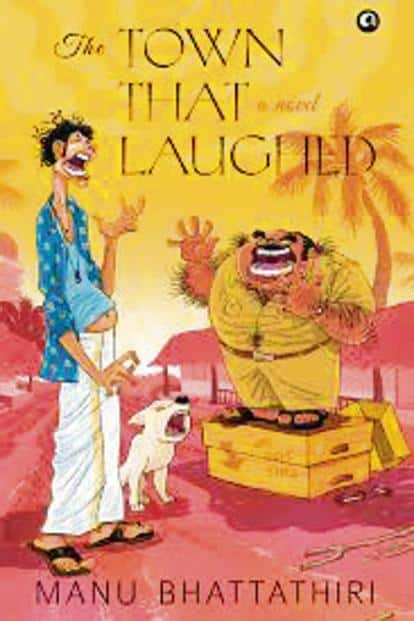 Bhattathiri has a remarkable gift for capturing the comic and the absurd in everyday life. He has little Priya providing elaborate commentary on an ongoing love affair between two of her schoolteachers, Kannan and Ambili, addressing herself to a dog instead of Joby because of Paachu’s absurd rule that child and man should never talk to each other. Here is oversexed Inspector Janardhanan addressing his luckless audience made up of constables in his police station: “Kimivahi madhuraanaam mandanam nakriteenam?" he enquires, before translating: “What, pray, is not ornamental upon a beautiful form? Anything, anything, will only add to the beauty of one whom nature had endowed with a magnificent form..."

The Town That Laughed is a highly original work, composed using elegant, accessible diction and presented in clear syntax, making for a delightful read. Revolutionary poets like Pablo Neruda may exhort us to “come and see the blood on the streets" but it takes an unpretentious writer like Bhattathiri to show us what actually happens in the ordinary streets of our ordinary towns, populated by ordinary minds—which means most of us, naturally—seeking the banal glories of a given, and inexorably perverse, world. As with most original works, it’s hard to say where we have arrived after the enjoyable, illuminating ride through the fascinating environs of Karuthupuzha. It’s a question that is perhaps best left to the accretions of our literary future.