The delicate art of Kangra miniatures

With artist studios and a dedicated museum, the future seems bright for Kangra miniatures

Only squirrel hair would do. Nothing else can draw the line as fine, a whisper barely heard. Squirrel hair, when shaped to create a point, is perfect for outlines.

Colours are a different matter altogether. When one sits down to capture the sky in all its hues, from blue to dark and brooding, or paint the trees that filter light at particular times of the day, one needs Mother Nature’s help. And help she does, offering rocks and stone, leaf and flower and even bugs, which yield their pigments to colour handmade paper or cloth. Indigo creates rich garment shades and rolling clouds, hansraj (a natural element, for brown) and kedia (for white and to burnish and prepare the cloth); malachite and lamp black is created by holding a burning wick under a metal surface.

It is hard work. But in his little studio, set a storey-high inside his house in a room that is perfectly lit by natural and artificial light, Dhaniram Khushdil would not do it any other way. Everything needs to be made fresh. His low working table is a glorious mess of colours and small plastic containers, but Khushdil’s real material is kept wrapped safely in cloth. Each pigment is coaxed out of its natural rock-like form after much rubbing and tempering. Others are extracted after boiling flowers and leaves and filtering the residue. Gond or natural glue is used to fix the colours.

Khushdil is one of the very few traditionally trained artists who have continued to keep miniature painting alive in the Kangra region. Pahari miniatures thrived as an art form from the mid-17th to 18th centuries, when, inspired by the beauty of the Himachal landscape, trained Kashmiri painters who sought refuge in the Guler royal court in Himachal chose to translate nature into their work. Soon, the art took wing: Chamba, Kangra, Bilaspur, Guler and Basohli would grow into centres where artists created scenes from Indian myths and poems and set them against the local backdrop of mountains and swaying fields of grain. Created in miniature, these organically coloured paintings had their own identity and life cycles.

Kangra painting enjoyed a burst of fame when the patronage of maharaja Sansar Singh, in the mid-18th century attracted a number of artists. Some of these miniatures can be viewed at a museum near Kangra Fort.

Miniature art during the Bhakti period (13th-17th centuries in northern India) complemented the growth of classical music, each feeding the other. Perhaps the paintings of lovers meeting by the riverside or in the forest helped inspire bandishes of nocturnal trysts, or vice versa. The great body of work that Kangra nurtured, mostly by unknown artists, had its distinguishing marks: delicate lines, detailing of dress and backdrop, with a variety of green shades creating depth and texture, graceful women, and soft pastel colours sometimes embellished by gold.

According to Vijay Sharma, a Padma Shri awardee and art historian, author and award-winning miniature painter who works with the state language and culture department at the Bhuri Singh Museum in Chamba, the art lost its appeal once photography made it easy to capture the natural beauty of the surrounding landscape. The advent of cinema did the rest.

Today, Kangra miniatures are on the threshold of a revival. The few remaining masters now have the state as a patron. Khushdil and Mukhesh Dhiman, both of whom are in their 40s and hail from Kangra, have been given clerical jobs at the local Brajeshwari and Chamunda temples, respectively. There, they have access to spaces to create their work, interact with visitors and take on students.

Suman Devi, a bank clerk in her 30s, is one such student. When the Kangra Arts Promotion Society (Kaps) was formed in 2007 and started conducting classes on the Kangra Museum premises in Dharamsala, she was among the first to attend. Her work won her a place in the top five selected out of 15 to work with a mentor, and she was assigned to learn from Dhiman at the Chamunda temple. For three years, Suman learnt the intricacies of the art, travelling 16km by bus every day. The trips stopped when she landed her bank job, but the painting continues.

Kaps also acts as a selling agent, exhibiting work by its artists. When required, artists are able to use the narrow, well-lit hall in the museum premises to work, and on the weekend I visited, the artists were bent over their low slanting tables. Some of the paintings, mostly reproductions of well-loved museum pieces, were on display. Prices ranged from Rs1,200 to almost Rs1 lakh. Some of the more talented ones had created their own themes: Suman’s own favourite, for instance, is her interpretation of a Kangra bride’s wedding. 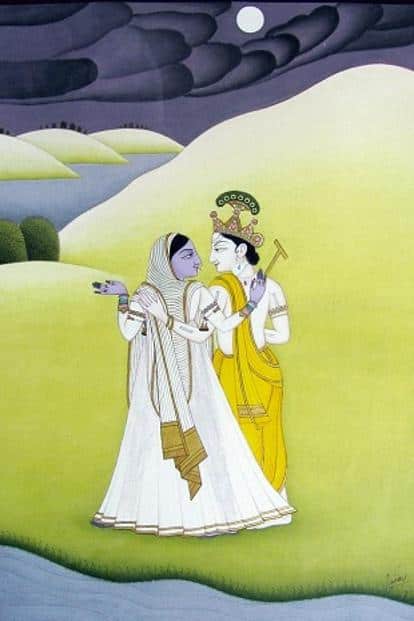 Khushdil has ventured his own themes too, among them an interpretation of Narasimha, the lion avatar of Vishnu. Vijay Sharma finds himself drawn to the Basohli school of miniatures, which uses enamel-like colours and geometric compositions, creating drama through juxtaposing figures in rich costumes with the backgrounds. Bulging eyes and stylized faces are other features that set this school apart from the Kangra style.

Though he has created a number of original works, Sharma likes to mention the painting that now hangs in the house of poet and film-maker Gulzar. They were co-panellists at a conference eight years ago, and Sharma was inspired to create a miniature that depicted the poet’s first poem for Hindi cinema: Mora Gora Ang Lay Le from Bandini. Gulzar was pleased, he recalls.“He said that his poems had been set to music, shot on film, but this was the first time they were translated into painting." He recalls the regret he felt as a 13-year-old when he learnt that the new-generation painters had become labourers and clerks because their work had no clientele.

It spurred him to teach the art.

These consolidated efforts might secure a future for Pahari painting. And perhaps, in coming years, this heritage art will be seen not just in museums and homes overseas, but on the walls of discerning Indians who understand the passion and skill that goes into creating a miniature painting.