With book stalls, music and street theatre, Mahaparinirvan Diwas, observed on 6 December, is a celebration of Dalit culture and identity

On 5 December, Siddharth Wamanrao Gaikwad packed a small bag with spare clothes and boarded the train from Amravati to Mumbai, as he’s done every year since 1988. Early the next morning, he lined up with hundreds of thousands of fellow Ambedkarites for a chance to visit Chaityabhoomi—a Buddhist shrine in memory of B.R. Ambedkar in Dadar—and lay flowers at Babasaheb’s bust.

“We come here to pay our respects to Babasaheb and pray that our children also grow up to be a scholar like him," says Gaikwad, dressed in a white kurta, dhoti, and wearing a white Gandhi cap. The 65-year-old manual labourer reached Mumbai with just enough money to buy a few cups of tea, and has had nothing to eat other than the free biscuits being handed out by volunteers. But he says that neither hunger nor having to sleep in the open in Shivaji Park can deter him from coming here.

“We leave our wives and kids to come, because this is a day we’re giving to Babasaheb and the (Ambedkarite) movement," he says.

Every year on 6 December, hundreds of thousands of Dalits and Buddhists from across the country travel to Dadar to observe Mahaparinirvan Diwas, the death anniversary of B.R. Ambedkar. For one day, the saffron flags of Shivaji Park—considered the bastion of the Shiv Sena—are lost amidst a sea of white and indigo, as Dalit individuals and organizations from across the political and social spectrum congregate to commemorate the life and work of one of India’s foremost liberal icons.

Schoolchildren waving blue flags and shouting “Jai Bhim" rub shoulders with lines of silent, red-clad Buddhist monks, and white-collar Dalit families. On the small strip of beach next to Chaityabhoomi, families wearing blue Ambedkar ribbons on their chests share snacks and take selfies. The occasion might be sombre, but the vibe is festive. Mahaparinirvan Diwas is a day of remembrance, but over the years it has also turned into a celebration of the vibrancy and diversity of Dalit culture. 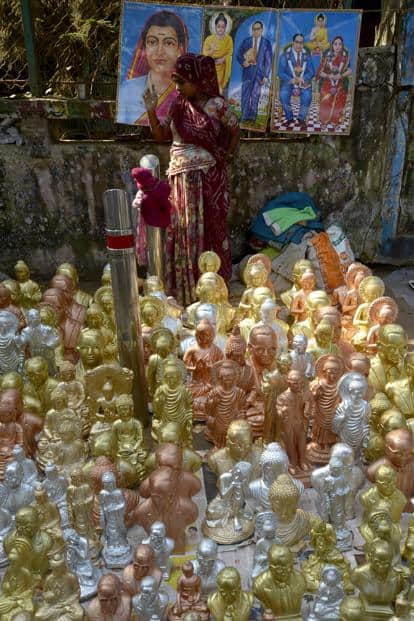 GOING BY THE BOOK

Inside Shivaji Park, various political and social organizations have put up their individual stages. But most of the crowd heads immediately to the hundreds of stalls in the middle of the ground. These stalls sell a wide range of items: brass figurines of Ambedkar and Buddha, Ambedkar T-shirts, Jai Bhim caps, posters, ribbons, lockets and watches bearing images of Ambedkar. Many stalls sell special Ambedkarite calendars, which mark the important dates in Dalit history, such as the birth and death anniversaries of Buddha, Ambedkar, Jyotirao and Savitri Phule and events like the Mahad Satyagraha and the battle of Bhima Koregaon. There are even stalls advertising special Ambedkarite tours and “Bodhisattva wedding" planners. But the most numerous and popular—by far—are the book stalls.

There are over a hundred, with booksellers and publishers coming to set up shop from all over Maharashtra. These typically small, independent outfits usually operate on wafer-thin margins by selling books, pamphlets and speeches by Ambedkar, as well as tracts on Buddhism and more contemporary books written by Ambedkarite activists. In the years following Ambedkar’s death, these booksellers fulfilled the task of spreading Ambedkar’s ideology to the newly literate Dalit masses. Now, as the mainstream literary establishment finally wakes up to the rich world of Dalit literature and political writing, they continue to operate their bookstores and publishing houses, bringing the words of Ambedkar to Dalit communities in remote parts of the country.

One of the many bookstalls near Chaityabhoomi. Photo: Abhijit Bhatlekar/Mint

One of the most prominent stalls belongs to Kaushalya Prakashan, an Aurangabad-based publishing house set up in 1995 by ENT physician Ashok Gaikwad. Over the years, Kaushalya Prakashan has published over 300 titles by Ambedkar and a host of other Dalit scholars and researchers. Manning the stall is Santosh Kamble, who has worked with Dr Gaikwad for the last 20 years.

“I joined the company because this is good work, it’s social work," says Kamble, once he’s done helping an elderly woman decipher the scrawl on a small chit of paper, the name of a book her grandson has asked her to buy. “We have books in Hindi, Marathi and English. Mostly they are books on Buddhism as well as literature by Dalits, Adivasis, those who are downtrodden in Indian society."

While most stall owners are from Maharashtra, some have ventured here from even further. Tucked away in one corner, opposite a stall set up by the communist-leaning Republican Panthers, is a small stall with two banners, Bheem Patrika and Navchetana Publications, both from Jalandhar, Punjab. Set up in 1958, Bheem Patrika is a magazine devoted to Ambedkarite issues, put out by the publishing house of the same name. It was set up by Lahori Ram Balley—still the editor at the age of 89—who met Ambedkar a few weeks before his death in 1956 and promised to devote his life to spreading his message. At the stall is Varinder Kumar, former managing editor of Bheem Patrika and the proprietor of Navchetana Publications.

Keshav Kamble has been running a bookstore in Mulund for 10 years. Photo: Abhijit Bhatlekar/Mint

“I met Balley saheb in 2001 when he was the speaker at an Ambedkar Jayanti event in our colony," says Kumar, who has been coming to Chaityabhoomi for 12 years. “He asked if I could proofread some of the books that Bheem Patrika was putting out and that awoke my interest in editing and publishing. I also wanted to contribute to Babasaheb’s mission of a caste-less society, and I realized that if I wanted to give more time to the movement, then I should take up publication as my work."

Both Bheem Patrika and Navchetana publish books by Ambedkar and other progressive, anti-caste scholars in Hindi, Punjabi and English. Apart from his book store in Jalandhar, Kumar sets up stalls at Ambedkarite events all over the country, including Uttar Pradesh, Haryana, Chhattisgarh and Odisha. “My aim is to spread awareness and education, so we make sure to keep the costs affordable," he says. Kumar doesn’t divulge how many sales he usually makes, but adds, “We earn enough to cover the costs of publishing, transport and carriage. But basically, we work on a no-profit, no-loss basis."

On the small path leading from Chaityabhoomi to the beach is the Arya Grantha Ghar stall, run by 64-year-old Mulund resident Keshav Kamble, who also goes by the name of Dhammachari Shakyavansh. A member of the Buddhist organization Triratna Bauddha Mahasangha, Kamble moved to Mumbai from his village in Raigad 45 years ago to work as a labourer in a Hindustan Unilever factory. But when the factory shut down in 2006, instead of taking up another job, Kamble decided to set up a bookstore in his home.

“This gave me an opportunity to do service," says Kamble, smiling as he keeps a watchful eye on the young man who is now handling the crowd at the stall all by himself. A wholesaler, Kamble stocks books by publishers from across Maharashtra. “Babasaheb’s literature, the Constitution, writings about the dharma, they all go from my hands to other people. For me that’s the biggest reward."

While books about Ambedkar and Buddhism are the most sought after, the Constitution is also immensely popular. Kamble claims to have sold over 5,000 copies of the Constitution over the past 10 years. The customers are mostly educated Dalits, but increasingly people from other castes are also becoming regulars.

“Change and progress can only come from education," says Kaushalya Prakashan’s Santosh Kamble, when asked why there are so many book stalls at Ambedkarite functions. He adds that many of his customers save up to buy books for themselves and their children. “Our people can only move forward by reading and educating themselves. That’s why books are very important to our community."

Ambedkar famously said of Ambedkarite lokshahir (people’s poet) Bhimrao Kardak, that “one of Bhimrao’s songs is worth 10 of my speeches." Since the beginning of the Ambedkarite movement, song and street theatre have been a way of spreading anti-caste ideas to the Dalit masses all across the country. That tradition lives on in Shivaji Park on Mahaparinirvan Diwas, as music blares not just from the stages set up by political parties but also as part of smaller impromptu performances by travelling musicians.

At the Satyashodhak Vidyarthi Sanghatana (a students’ anti-caste organization) stall, two members of Mumbai-based cultural troupe Yalgaar jam over a guitar, performing a popular Marathi song about Ambedkar. A bystander joins in, and then suddenly there’s a small crowd of strangers all singing along. When the song ends, they disperse with salutations of “Jai Bhim!". Similar scenes take place all over the ground and outside it.

As darkness descends, another crowd forms in front of the Bengal Club entrance to Shivaji Park. At its centre is a 51- year-old woman in a white sari with indigo border, playing the harmonium and singing as two generations of her family accompany her on dhol and vocals. Satyabhoomi Maski has been coming here from Ghatkopar, Mumbai, for 39 years, since she was 12 years old. She performs songs about Ambedkar, Savitribai Phule and Shivaji Maharaj, travelling to all the major events on the Ambedkarite calendar, including Bhima Koregaon (1 January) and Ambedkar Jayanti (14 April).

“For us, this is a day of sadness," says Maski. “Babasaheb was a diamond, and on this day he left us. If he wasn’t there, what was our life like? Nothing. The world has lots of gods and deities, but none of them did anything for us. Only Babasaheb helped us."

Maski is old enough to remember being treated as an untouchable and being forced to do manual scavenging in the village she grew up in. Her singing, she says, is a way to devote her life to Ambedkar and his movement. “We want to live in a world where there is no caste," she says. “Where there are only men and women."

While Mahanirvan Diwas is a day of remembrance and celebration, the gathering is not unaffected by contemporary politics. With so many Dalits in one place, it’s also an arena where political parties and socio-cultural organizations can raise public consciousness and mobilize people for their respective causes. Political leaders of all hues, including chief minister Devendra Fadnavis, make appearances and speeches. At the People’s Republican Party stage near the entrance to Chaityabhoomi, a speaker engages the crowd with barbs at the RSS and its supremo Mohan Bhagwat. At the nearby Dadar Terminus, members of the Uttar Pradesh based Bhim Army put up stickers reading “Dr. Babasaheb Ambedkar" over the terminus signs, as part of an agitation to rename the station.

The violence at Bhima Koregaon this January is a major topic of conversation, both on the stage and within the audience. Many in attendance are angry at the Hindu right, perceiving it as a threat to their safety and to the Ambedkarite movement. A few are even angry at the media—one book stall owner refused to speak, saying he had lost all trust in mainstream reporters.

“They (the RSS) have polluted the social environment of our country," claims Sunil Narvare, who travelled to Mumbai along with five friends from Nagpur.

But it is Bhagwat’s call to change the Constitution in accordance with “Indian values", first made last September and reiterated earlier this year, that is at the top of everyone’s mind.

“The atrocities that have happened on our community for centuries, we have forgotten," says Siddharth Gaikwad. “But we won’t let them happen again. That’s why all of us are uniting, to say that today, we won’t let them put a hand to our Constitution. We will fight back. But we don’t want to fight. You get only one life. Why not educate yourself, progress and work toward making India a beautiful country for everyone?"