The curious gaze of a Ravinder Reddy head

Ravinder Reddy's solo, starting Sunday, showcases the evolution of his repertoire, from the early relief works to his signature heads

The first thing that you notice about G. Ravinder Reddy’s signature heads is their gaze. It’s direct, hypnotic and arresting. The heads never look sideways or over the shoulder. It’s almost as if they are looking ahead, into the future, at sights and visions that are out of reach of the viewer. “Heraldic," is how artist-poet Gieve Patel described Reddy’s sculptures in a 1991 Sakshi Gallery exhibition catalogue. He defined the head as having “the characteristic attitude of one who proclaims…the one who predicts may draw the material from the past, but he has only the future to address."

Reddy’s Heads And Bodies, Icons And Idols—his first solo show in a decade, starting Sunday—will be exhibited at The Gallery, a non-commercial arts space set up by the RMZ Foundation in Bengaluru. I ask him if the characteristic frontal gaze, which has now come to define his work, was a conscious decision. “Not really. But I had seen many artworks in which the eyes didn’t communicate, arouse emotions or engage the viewers," says Reddy over the phone from Visakhapatnam, where he is based. He is amused at how much comment this “gaze" has generated over the years. “I just wanted a look that went beyond time, beyond the present, something akin to the ancient Egyptian and Mayan works, which have such an enduring quality about them."

Over the past three decades, gold-emblazoned surfaces, bright colours, complex hairdos and multilayered interpretations have come to define Reddy’s work. The forthcoming exhibition, The Gallery’s inaugural show, seeks to trace the evolution of his repertoire, which combines pop art with Indian sculptural traditions. The show will feature a selected compilation of over 26 works drawn from over the last three decades, some of which have never been viewed by the public.

There are sculptures with relief work such as the Girl With Umbrella from the 1980s, which represent his early exploration of the female form, articulating the demeanour of urban young women in the context of a rapidly westernizing Indian society.

At the show, curated by the artist himself, one will also get to see the famous Akshatyoni-III (1989-90), which is considered a turning point of sorts in Reddy’s art—when he began to focus on oversized female heads as the embodiment of individual and universal feminine attributes. Then there is a new work, Devi (2017), which will be permanently installed within the gallery space at RMZ Ecoworld. Devi was conceptualized in 1991, and Reddy continued to work on it, taking the idea forward in different forms, shapes and sizes.

Reddy’s last solo exhibition was at Grosvenor Vadehra, London, in 2008. I ask what took him so long. “This new show is a non-commercial one, so I could borrow works from here and there as well. The RMZ Foundation’s invitation proved to be an ideal opportunity as The Gallery can accommodate my large-sized works and also works from different periods," says Reddy. “Also, even though I stay in Visakhapatnam, I have never really shown in the south. All this happened because Premilla Baid, art consultant with the foundation, was persistent that I show and share my artwork with the citizens in Bengaluru."

Whether it is Padmini, Krishnaveni or the Woman In Red, there is a sense of duality in each of his sculptures. Heavily influenced by the Kushan and Mathura styles of sculpture, Reddy’s works have women depicted in Yakshi-like forms, but in a language which is contemporary. As Patel mentions in his essay: In his search for forms that could satisfy his sculptor’s instinct, Reddy goes back to earlier periods of civilization—the Egyptian and the early Greek, where conventions of extreme simplification and frontality prevailed. “This bold backward step is to me a confirmation of the authenticity of the herald role," he writes. Art historian R. Siva Kumar concurs: “There has always been a tension of the classical and ancient with the contemporary and popular in his works."

The roots of this duality can be traced back to the 1980s, when Reddy was studying at the faculty of fine arts, Maharaja Sayajirao University of Baroda. He realized that sculpture was still being practised according to the British principles laid down by the likes of Barbara Hepworth and Henry Moore. Young artists, travelling abroad, would become heavily influenced by these masters. “They would be burdened by the colonial principles of modern art, with their instinct and sensibilities being badly out of sync with these ideals. Most would end up making derivatives of temple art. There was nothing contemporary about it," says Reddy. “I wanted to bring out the everyday life in my work. After all, the primitive and the advanced coexist in our country. My encounters with both have shaped my art." 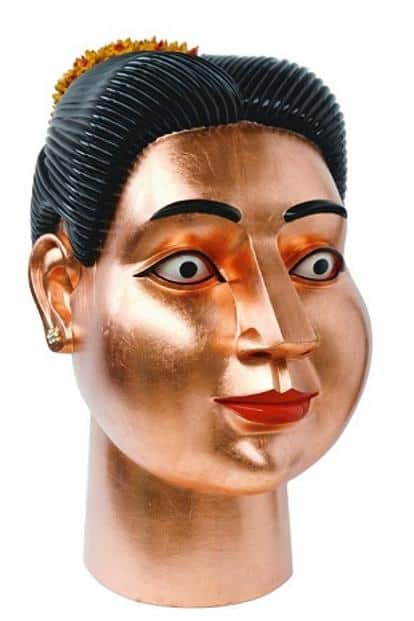 A sculpture made of polyester, resin and fibreglass.

Another defining feature of Reddy’s art is his depiction of the female form, which is voluptuous, sensual, exaggerated in its presence and open to interpretation. In her essay in the catalogue for the exhibition In Transit 3, featuring Manjit Bawa and Ravinder Reddy, at the Alexander Ochs Galleries, Berlin, art critic and curator Kamala Kapoor writes: “Reddy’s women, both nudes and busts, both singled and grouped, are as if transgressions within some grand operatic synthesis. These images don’t fit mostly into our tightly programmed world, nor do they mirror images we tend to seek." The images could also be seen as iconoclastic or interpreted in the context of gender and identity politics. But for Reddy, this exaggerated form stems from this universal quest to find one’s ideal of beauty. “To me, the idea of beauty is very different. I don’t find the so-called fat, bulging woman ugly. That’s her body. Why should we classify it? When I see someone heavy, I notice the grace with which she is carrying herself. Why can’t we appreciate that?" he says. A sculpture made of polyester, resin and fibreglass.

Over the years, Reddy realized that conventional materials such as bronze and terracotta wouldn’t translate his ideas into the sculptural reality that he wanted. So he chose fibreglass resin. “I like modelling in clay. Fibreglass allows me more flexibility than stone or wood," he says. Moreover, it is a neutral material and can take any colour or shape. When Reddy used fibreglass for the first time in the late 1980s, people were critical of the fact that he was employing an industrial, non-aesthetic material to create a work of art. “Things are different now as artists make avid use of such materials. At the end of the day, it’s the idea that should matter. The material can’t dominate your concept," he says.

As he gets ready to finish last-minute preparations for the show, I ask Reddy if he will ever move beyond the heads. He thinks about it for a minute and says: “My preoccupation is with the human figure, in its relation to society. I have explored full figures as well. It’s just that one has happened to see more heads as they are more popular and publishable. Newspapers don’t often like to publish nudes."

Heads And Bodies, Icons And Idols can be viewed at The Gallery, RMZ Ecoworld, Bengaluru, from 9 July-9 September