The adoration of Chapal Rani

For years, Chapal Bhaduri was the reigning star of the Bengali 'jatra' theatrea man who transformed himself into a beautiful woman before each performance. This is his story, in his own words, told on the eve of the Delhi screening of a documentary about his life

I am no longer as beautiful as I used to be, he says with a twinkle that went back to the 1960s and sparked memories in my head of this once- and ever-beautiful woman-man: Chapal Rani. The reigning queen of those days of our youth. A woman we-of-the-theatre grew up adoring: The adoration of Chapal Rani. In those days of a purer jatra, the travelling theatre of Bengal, when men played women, wounding the hearts of an enthralled audience in performances that would last an entire night. Sheer stamina, coupled with a monumental style of acting with every gesture exaggerated to live music and declamatory dialogue. Voices that boomed and thundered and whispered and cried tears, that would overflow and flood the hearts of a riveted audience of men, women, children.

My mind goes back and forth as I talk to this legend, Chapal Bhaduri. Born in 1938 in Kolkata, now in his twilight years, and no longer “needed" by what I call an increasingly “soapyfied" jatra, where female stars of the Bengali screen now play women’s roles. So no place for men who played women.“Besides," he repeats, smiling, and on cue, the twinkling eyes mocking his echo, “I am no longer as beautiful a woman as I used to be." Here’s Chapal Bhaduri’s story, in his own words.

At the time, men playing women was common. There was a large market for it. Someone asked me, Will you act as a woman? I laughed. What! I’m a man! How can I play a woman? And what about all the stuff a woman has? How will I manage? He said, Oh, that’s okay, we’ll dress you up to look like one. To become one! If you’re willing, you’ll have a job in the Eastern Railway office within 15 days. So I said, all right, I’ll do it.

My first role: I played Marjina in Alibaba. Within 15 days, I got the job in the Railways. But on the condition that I would agree to perform in plays for all their different departments. Dressed as a woman. They dressed me in women’s trousers, with a bright red Irani shirt and a waistcoat over a brassiere stuffed with torn cloth. Knitted my hair into two plaits. I knew nothing about dressing myself then...a huge red rose...a pair of peacock feathers tied to my wrists, small-heeled shoes and bells on my feet. They did it all. Ah, what a pretty young thing I was!

Marjina’s first entrance was with a song. The curtain had already gone up, the music had begun.... I was frozen. Paralysed! I’d take one step forward, one step back. At that point—this is quite a funny incident—seeing me dressed like that, some boys mistook me for a girl. Now, usually, if there’s a beautiful girl around, boys tend to crowd about her, if they’re young. They all gathered around me. One of them pushed me forward: Arrey, bhai! Go on! Enter!

That’s how it all began.

Acting is part of our family tradition. My mother, the late Prova Devi, was a well-known actress. Theatre, cinema, radio, gramophone recordings, she did them all. Observing her, imitating, memorizing her dialogue from records—all this was part of my childhood. I would take a cloth and twist it round and round to form a bun. I’d take a second cloth and drape it over my shoulders, and start singing. My uncles and older brothers would shout at me: What’s this nonsense? Always up to indecent stuff. We’ll give you a good hiding.

Let me tell you another story. Just beyond Chitpur is the red-light district. I said, sure, I have no prejudices, I’ll go if I need to study a character...fine. After all, I’m just going to study another person, follow her actions. So I went and met that lady. She said, “Fine! Go ahead. After all, you’re jatra actors." I dressed exactly like her for the shows. How she uses the local toughs, or if a girl holds back money. This is how I studied for my roles, and that’s what made me successful.

There was also this other role I played in the Natta Company. The play, Sonar Bharat, for instance, is about Jaichand and Prithviraj. Jaichand’s queen, Purnima, goes mad. How does one play a mad person? By observing one. Else you end up babbling, laughing, crying, shrieking. I decided, no. There must be more realism in the role. In any case, I tend to try and go beyond what’s on paper. I wasn’t easily satisfied. Which is why I was labelled finicky.

One day, on my way to the Natta Company, near Sovabazar in Kolkata, I saw a madwoman scribbling in the dust, looking up, wiping it away, scribbling again. And I thought, Ah-hah! That’s what I’m going to use. Yes, that’s what I did always. Studying real-life situations. Little things that make people what they are. Soaking in their mannerisms. Making them my own.

Jatra is no longer what it used to be. Earlier, when I was with the Natta Company, the concert party, or musicians, would line up on two sides. A harmonium here, a harmonium there. A huge wind instrument, the tuba, the cornet, without which no jatra performance sounds right, clarinet, violin, table drums of different kinds, cymbals, bells, and a three-cornered instrument played with a stick, which, in the theatre, they call a “triangle", and the one who rang the bell—he really had an important role. He would hold the gong up in front of his face sideways and strike it hard. We’d feel that sound right here, in our hearts. Then the drums really got going. When the concert reached its climax—“Raja, raja!" “Who calls? Who dares disturb me thus?"And so the jatra would begin . . . 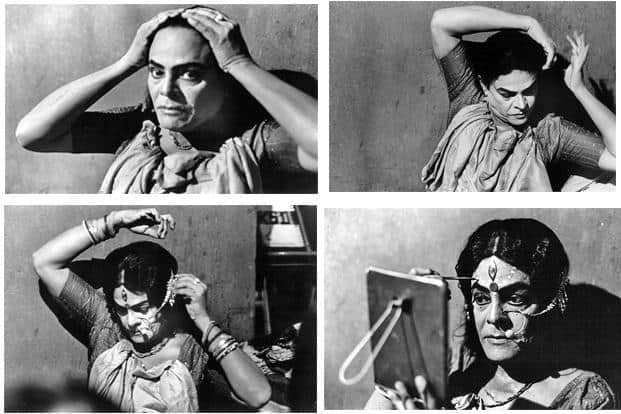 Compared to the other men playing women, my face looked different. This was a boon, and a major reason for my popularity. Make-up—facial make-up. Earlier, jatra make-up was done differently. You would apply kohl with a little finger like this, or with a matchstick, make a paste of red vermilion or lac-dye ... today you have powder, lipstick, eyebrow pencil. We didn’t have the kind of false eyelashes, made of hair, which are available now. Back then, we used a paste of hot wax and soot. Once our make-up was done, with a special brush, a small pointed brush, we would heat it over a candle flame and apply the paste .... This made the eyes seem bigger and beautiful. In the theatre, there are lights, under which make-up shows up well. In jatra, we used Petromax lamps. Very few places had electricity. Now, of course, there is electricity in most places. In the theatre, first there’s the stage, then wings, footlights, then 2-4ft of space, then the seats for the audience. There’s no contact with the audience. That’s why the acting style is different. There is a distance from the audience. But in jatra, we’re cheek by jowl with them, we really mingle with the audience.

But the loneliness doesn’t go away. Despite all the hustle and bustle, the people, the noise, I still feel alone. It’s a part of me. Apart from my parents, the person I loved most was the friend I told you about, but he, too.... Love is relative, not the same for all. I decided love of god comes before the rest. And that’s what I do, isn’t it? I offer my love to god, sing (the folk deity) Ma Sitala’s praises.

So be it. I have no regrets. Earlier, I would worry: How will I survive? Earn? But now things are okay, life goes on. I’m no longer in jatra because the jatra no longer has any use for me. Now I perform two-three shows a year at Sitaramdas Omkarnath Thakur’s ashram in Kolkata, where it is against the custom for women to perform. There I direct, supervise the stage, lighting arrangements, the setting of the mikes, make-up, then play the main part. I really have to slog. Still, being in the midst of my work makes me happy. And I’ve been doing the Sitalapala, playing Ma Sitala, since 1995. Particularly while dressing up as Ma Sitala, once I don the divine Third Eye, I don’t know why there is a transformation within me. I’m scared. She is the goddess of disease, after all.

I gave a lot to my art. What did I get? Nothing. After moving from group to group, in 1974 I had to stop for five years. Then Ma Sitala raised me from the darkness, made me strong, and so I’m living, somehow, if you can call this living...it’s so uncertain. Barely 25-30 shows a year, hardly enough, but still, the Mother hasn’t abandoned me. I sing her story, I have no complaints. If I can carry on, somehow, keep smiling...

As told to Naveen Kishore, publisher of Seagull Books and director of Performing The Goddess: Chapal Bhaduri’s Story (1999). The film will be screened at Amaltas, Habitat World, India Habitat Centre, New Delhi, on 16 April, 7pm, as part of the IFL Samanvay Translations Series 2018. There will be a live performance by Bhadur