Surfing against the odds

In the shallow waters of Kovalam beach in Chennai, a young woman in a purple bodysuit lies flat on a surfboard, paddling in the surf. Her instructor, in a yellow T-shirt, wades next to her. It is a hot Wednesday afternoon: the air is sticky and the only sound is that of waves breaking against the shore. When the woman tries to raise herself on all fours, a wave slams against the board and topples her over. Trying to find her bearings, she seeks the hand of her surfing instructor, slides back on the surfboard and lets out an excited squeal.

On the beach, Nina Vaidya, a paediatrician, is sitting on a blue plastic beach chair, observing the scene. A few moments later, she slips out her smartphone and runs towards the sea to take photographs. Her daughter Palak, who has Down’s syndrome, is learning to surf for the first time.

In early September, Dr Vaidya and Palak travelled over 2,000km from Gujarat to attend Surfable, a special camp at Kovalam beach organized by A Special World, a Chennai-based initiative for differently-abled children. Surfable is a first of its kind festival for children (above the age of 10) with autism, cerebral palsy and Down’s syndrome in India. Families flew in from Delhi, Coimbatore, Mumbai, Mysuru, Gujarat and Bengaluru to attend it.

The three-day camp is taking place at Covelong Point Surfing School, a surfing education initiative headed by Murthy Megavan, a champion surfer. The school is one of the few places that teaches surfing to those who suffer from learning and cognitive disabilities.

It’s the first day of the camp. Megavan, 38, is standing on the beach, his arms folded, and feet sinking into the hot sand. His marble black eyes scan the sea, watching the nine children who are surfing alongside Palak. Each of these children has a disability, yet each is tackling the waves with enthusiasm. Their instructors (all in their early 20s and from the fishing village of Kovalam) have been trained by Megavan, a fisherman’s son, who taught himself to surf using abandoned wooden doors. Now his protégés are tutoring children how to ride the waves.

Dr Vaidya has been a paediatrician for the last 26 years and a counsellor for parents with differently-abled children for 17 years. According to her, surfing is akin to water therapy. It calms the nerves, improves inter-limb coordination and strengthens muscle tone. “Children who have autism or Down’s syndrome have weak muscles, while children with cerebral palsy have difficulty controlling their muscles," she says. “In both ways, water therapy helps, because when you are in water, you don’t feel your body weight. Movement becomes easier compared to the exercises you’d do out of water."

It’s also an act of liberation. For differently-abled children—who’ve often endured ridicule and been denied such experiences due to their condition—the opportunity to surf is an inimitable gift, instilling within them a sense of confidence. The sport also improves the children’s cognitive skills, says Prof. Rubina Lal at Sopan (Society of Parents of Children with Autistic Disorders), Mumbai, who is known for her work in the field of rehabilitation for autistic children. “There are rules to be followed and instructions to be understood. If a differently-abled child is learning how to surf, he/she has to follow the instructor. This enhances the child’s language and communication skills," she says. 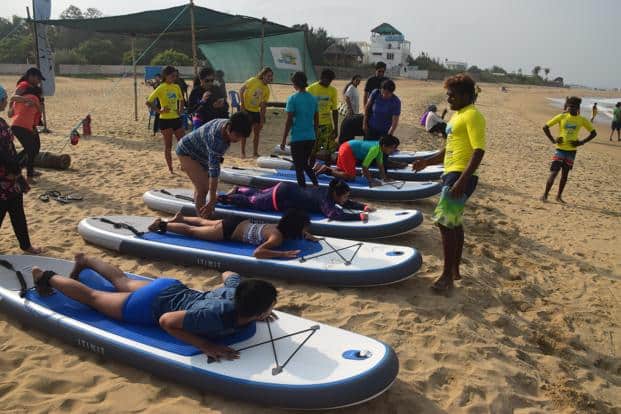 Megavan began surfing when no one in his community even knew what it was. After watching Jack Hebner (popularly known as Surfing Swami), an Australian, weave in and out of the waves in Kovalam back in 2001, Megavan realized that he didn’t want to tend a net to harvest fish. At the age of 21, he wanted to become a surfer instead. “I watched Surfing Swami, one of the pioneers of surfing in India, ride the waves only once. I approached him and borrowed the board from him. Within minutes, I was surfing on my own," Megavan says, simultaneously bending his knees and stretching his arms perpendicular to the ground. “The sea is my home. People from the fishing community like me know how to move with the current."

Megavan began spending more time riding the waves instead of boarding a fishing boat and setting out to sea. Learning to surf was not easy. Surfboards at the time cost ₹ 4,000 and Megavan could not afford one. So he would scout for wooden platforms which he could use as makeshift surf boards. “I was told that I had gone mad," Megavan recalls. “‘What are you doing standing on a board all day?’ People would ask, laughing."

Refusing to be browbeaten, Megavan practised for hours on end. It became therapeutic: the sound of the waves drowned the noise of ridicule whenever he was at sea. When he rode the waves, he felt at peace.

Within Kovalam’s fishing community, however, Megavan was considered a wayward character. In India, individuals with special needs have often been misunderstood and pushed to the fringes. “Perhaps that’s why," Megavan reasons, while standing on the beach, backlit by the afternoon sun, “I’ve always felt connected with those who are disabled. I know what it’s like to be different. I can understand them." He speaks slowly, rhythmically, like the waves of the sea.“I want the disabled children to enjoy the water. These people already have so many problems. Why should they miss out on surfing because of that?" There are about 26.8 million people suffering from disabilities, according to the 2011 national Census. In India, while 3 in 1,000 individuals suffer from cerebral palsy, 1 in 800 has Down’s syndrome and 1 in 68 is autistic. Often overwhelmed by the fear of being bullied or ridiculed, children with cognitive or development disabilities tend to retreat into a shell in every day social situations. As they grow older, they often begin withdrawing from society, which in turn leads to isolation, anxiety and psychological disorders like depression.

Until the age of 15-16, children with cognitive disabilities have activities in school that keep them engaged. “After they cross that age, however, they begin experiencing a vacuum in their lives. These children undergo hormonal changes and crave for romantic relationships and friendships," explains Dr Vaidya . It’s one of the reasons why “a majority of differently-abled adults" suffer from clinical depression. “If a child with special needs remains connected to the environment through a number of activities, there are less chances of him/her getting into depression, which is why surfing is a great activity."

Among the 10 differently-abled children participating in Surfable, Palak, 25, is the most outspoken. Others are characteristically taciturn and often turn away, tucking their heads into the chest of their guardian. During a casual conversation with Palak, she says that she wants “to become a surfer when I grow up!"

“Palak is perhaps more outgoing because I’ve ensured that she has a large friends’ circle. She has gone on many adventure camps for special people—mostly out of the country though. There aren’t many adventure opportunities for people like her in India," says Dr Vaidya . 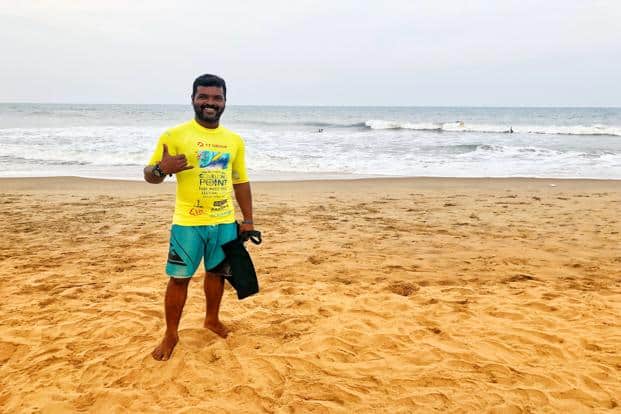 “Even if you take some of the popular sports in India, there isn’t a lot happening for the differently abled," says Rammohan Paranjape, vice-president of the Surfing Federation of India (SFI), on the phone from Mangaluru. “Surfing itself is at a nascent stage in India, and the SFI is still trying to make it popular among common people. So we haven’t really had a chance to focus much on the differently-abled," he admits. “In addition, surfing is not an easy sport. It’s hard for a person without disabilities to do it, so for those who are differently-abled, it’s even more challenging." But it’s not completely impossible—the International Surfing Association (ISA) hosts a global competition dedicated solely to differently-abled surfers called Stance ISA World Adaptive Surfing Championship. “I believe that going forward, if the SFI really makes a collective effort with the community, we could push adaptive sports forward in India as well," says Paranjape.

Over the years, Megavan has met people from different walks of life who’ve supported him, such as Yotam Agam, an Israeli surfer who made a documentary on him titled Covelong Point, which made Megavan an overnight surfing celebrity in Chennai. It was through Agam that Megavan also met Arun Vasu, chairman of TT Logistics—an ancillary of business conglomerate TTK Group—who helped fund the establishment of Covelong Point Surfing School in 2012.

The school trains a coterie of surfing enthusiasts, not just those who are differently-abled. Within the building there is also an Italian restaurant and a small bed-and-breakfast lodging arrangement. “Now the same people in my community who once laughed at me are envious," says Megavan. “It is the healing process of surfing that helped me overcome the trials of life. Like the waves, you have to accept the highs and lows of life. If you don’t have problems, there will be no growth. In life, if you want success, you have to look at the problems head on. Look at these special children, they’ll keep surfing, they’ll keep going."

This staff writer’s piece was produced as part of National Geographic Society’s Out of Eden 2018 journalism workshop.